President Barack Obama is bookending his administration with new efforts to expand access to government information just before the 50th anniversary of the Freedom of Information Act becoming law.

The President signed the FOIA Improvement Act of 2016 into law June 30 during a Rose Garden ceremony. He also announced a series of new steps to build on his administration’s efforts to make data and information more accessible.

The FOIA Improvements Act codifies many of the concepts the President initially introduced in 2009, including the presumption of openness for all government records. The House passed the Senate’s version of the bill June 13.

Obama said at the bill signing ceremony that “over the course of my presidency, we have processed more FOIA requests —Freedom of Information requests —than ever before. And we have worked to make it easier and more transparent, putting more and more stuff online. But having said all that, we’re actually getting many more requests for FOIA than ever before. And so we’ve had to figure out ways that we can reform this to make it easier, faster, cheaper for people to get the information that they want.”

Obama launches these new efforts with just over six months left in the administration, which he began in 2009 with a memo to agencies to have a “presumption of openness” under FOIA.

“Importantly, the reform bill codifies the presumption of openness — requiring records be released unless there is a foreseeable harm or legal requirement to withhold them,” said Openthegovernment.org in a release. “This language mirrors the Obama administration’s and the Department of Justice’s 2009 guidance on FOIA, which reversed the policy of the Bush administration that had encouraged agencies to limit discretionary disclosures of information. With these legislative changes, the law makes clear that FOIA, under any administration, must be approached with a presumption of openness.”

The bill also sets a time limit of 25 years for on how long agencies can keep internal deliberations confidential, and requires proactive disclosure of records or information to any person who has “become the subject of subsequent requests for substantially the same records” or if the records have been requested three or more times.

The Chief FOIA Officers Council is one area where the White House immediately expands upon.

The administration said the council’s first meeting will be July 22, and directed it to work with experts in and out of government, including the FOIA Advisory Committee created by the National Archives and Records Administration (NARA) in May 2014, on identifying and offering solutions to the biggest difficulties in administering FOIA.

The President also named new members to the advisory committee, which will hold its first meeting on July 21.

Additionally, the White House is asking the Chief FOIA Officers Council to consider the lessons learned from a DoJ pilot program on FOIA and turn them into a new governmentwide policy establishing a “release to one is a release to all” presumptive standard under FOIA.

“The Chief FOIA Officers Council will examine issues critical to this policy’s implementation, including assessing the impact on investigative journalism efforts, as well as how best to address technological and resource challenges. By January 1, 2017, the Chief FOIA Officers Council will work with the Office of Management and Budget (OMB) to provide further guidance as it relates to this presumption,” the White House said.

In fact, Justice released the final report of the pilots on June 30. Justice said it came up with seven findings including the need to address Section 508 accessibility requirements and it’s unclear whether the pilot will cause the demand for records to increase or decrease.

The White House also plans to expand the FOIA.gov portal by 2017.

“This portal will initially provide for centralized submission of requests and will continue to be enhanced to include other features to guide requesters through the FOIA process, improve the public’s ability to locate already posted information, and track requests online, among other functions,” the administration said. “The administration will announce further details about the functionality of the portal and the timeline for launching its initial phases in the coming months.”

“This guidance will ensure the establishment and operation of a unified, citizen-centric FOIA request portal and promote standards for interoperability to facilitate agency adoption and participation,” the administration said. “OMB is also announcing today the creation of a cross-agency priority (CAP) goal for FOIA, that will be co-led by OMB, DoJ and NARA, to focus senior leadership attention and drive performance and accountability for improving the way in which FOIA requests are administered, and ensure that federal departments and agencies are providing sufficient resources toward FOIA responsibilities.”

Despite the efforts started in 2009, open government groups have long criticized the administration for not doing enough to make information more accessible.

The National Security Archive reported in March that out of the 165 federal offices that process at least 500 FOIA requests each year, 67 met the requirements of the law to have online libraries populated with significant numbers of released FOIA documents and regularly update that library.

Alex Howard, a senior analyst at the Sunlight Foundation, wrote in a blog post that the administration’s record on FOIA fell short of expectations.

“Agencies have been slow to adopt the new FOIA guidelines, much less apply them. And when the Rosemary Award for the worst open government performance of 2011 went to the U.S. Department of Justice, the agency charged with overseeing compliance with FOIA, it anticipated worse to come. The agency not only sought to weaken FOIA but actively lobbied against FOIA reforms in Congress that would make the administration’s own policy into law,” Howard wrote. “Reforming this law will not be a panacea. In the years ahead, our federal government can make the Freedom of Information Act better through oversight, improved use of technology, procurement reform, better training and improved staffing processes.”

As the bill looked like it was going to the President’s desk, House Oversight and Government Reform Committee members asked the Government Accountability Office in April to report on the number of exemptions each agency uses, methods used to reduce FOIA request backlogs and the number of agencies in compliance with the FOIA law.

Despite some frustrations, agencies are reporting they are doing more to process requests and make information more accessible.

The Justice Department published its annual FOIA report in March, showing agencies processed a record high of 769,903 FOIA requests in fiscal 2015, which is an increase of 19 percent from 2014, and the first time agencies have reported processing numbers over 700,000 requests. 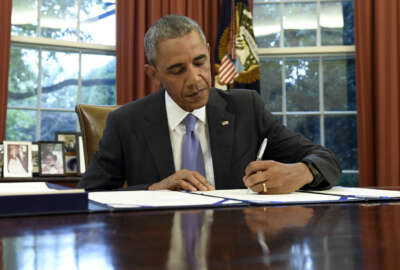