If the Trump administration plans to follow through on the president’s campaign pledge to build a 350-ship Navy — about 60 more vessels than are in the fleet today — there’s little sign of it in the federal budget, at least not in this year’s version.

The 2018 request the administration sent to Capitol Hill this week asks for funding to purchase just eight new ships, one more than the Obama administration proposed last year and one...

If the Trump administration plans to follow through on the president’s campaign pledge to build a 350-ship Navy — about 60 more vessels than are in the fleet today — there’s little sign of it in the federal budget, at least not in this year’s version.

The 2018 request the administration sent to Capitol Hill this week asks for funding to purchase just eight new ships, one more than the Obama administration proposed last year and one fewer than Congress ultimately approved for 2017.

Defending the plan before the Senate Appropriations Committee, Adm. John Richardson, the chief of naval operations, said there’s a good reason for that: the Navy needs to focus on restoring its readiness before it thinks about increasing its size.

“I know that many of us are focused on adding more ships to the fleet. I am too,” he said. “But make no mistake, if I can’t repair a ship that’s already been bought and paid for to get back to sea, we forfeit the good, hard work of our predecessors, and the effect is the same as not buying a ship: it ends up being one less ship at sea. Morale suffers, and U.S. naval power suffers.”

The message is consistent with what Navy leaders had been saying in the months leading up to the budget rollout: that the service’s most urgent priority is filling near-term maintenance gaps that have left parts of the fleet undeployable for want of repairs and recertifications. Still, the budget did not explain how the Navy could eventually grow to the 350-ship fleet that the president has said is necessary, an aspiration Richardson also reaffirmed in a paper earlier this month.  In a departure from past budgets, the 2018 rollout did not include a concrete forecast for the funding levels the Defense Department believes it will need over the next five years.

Navy officials said lawmakers should expect to see a multiyear plan to increase the size of the fleet, but not until next year at the earliest, after Defense Secretary James Mattis and the rest of the new administration have had a chance to complete their own defense strategic review and draft a new strategy.

Until then, the focus is on funding ship maintenance at 100 percent of the Navy’s needs, hiring about 1,000 new depot maintenance employees, paying for upgraded equipment and information technology in those shipyards and increasing flying and steaming hours, said Sean Stackley, the acting secretary of the Navy.

“Years of combat and high operational tempo have accelerated the aging of ships and aircraft, increased our maintenance requirements, drawn down munitions and supply parts and impacted our training,” he said. “Budget constraints, budget uncertainty and continuing resolutions have exacerbated these issues, with the net impact being a decline in the condition of our ships and aircraft.”

Overall, the Navy’s $17.3 billion shipbuilding budget is about $100 million less than Congress ultimately approved for 2017. Officials say in some cases, it’s just enough to keep ship construction facilities active, keep their workforces employed and maintain the health of the industrial base.

But some members of Congress are already expressing skepticism over that claim.

For instance, the budget the Navy submitted this week would only purchase one new littoral combat ship (LCS) in 2018, despite previous testimony in which officials said the commercial shipyards that produce the two separate variants the vessel would need orders for three-per-year to run at efficient tempos and keep their workforces employed. The budget agreement lawmakers reached earlier this month funded three ships in 2017.

“Just one LCS in fiscal year 2018 could result in 800 job losses at Marinette Marine in my home state of Wisconsin, nearly 2,000 jobs across the state, and devastating the yard’s ability to compete for the future frigate,” said Sen. Tammy Baldwin (D-Wis.).

Rep. Bradley Byrne (R-Ala.), whose state includes the other LCS shipyard, operated by Austal, expressed similar concerns, saying that slowing production rates would cause the defense industrial base to lose precisely the workers the Navy will need when it submits future budgets that ask Congress to ramp-up shipbuilding again.

“This is a highly-trained, highly-skilled workforce, and they’ve been working together long enough that they’ve gotten costs down,” he said. “This is not a spigot you can turn on and off when you want to. When these people leave, they’re gone, and trying to rebuild even part of that technical capability back to where we’re going to need to meet the Navy’s 52-ship requirement for small surface combatants is going to be difficult, I think it’s going to draw out the timeline, and I think it’s going to increase the expense of the ships in the future.”

But Stackley defended what he said would be a one-year cutback for LCS procurement rates, saying the Navy believes it can “mitigate” the impact to the shipyards since they’re still working on orders that were placed with funds from 2017 and prior years.

“There are 20 ships in the backlog,” he said. “We’ve got to work with that while we revisit 2019 and understand what the industrial base needs. I will be clear though — the one ship in 2018 is below the optimal, and we are concerned with every loss of skilled labor. But we have to balance that against the other priorities in the budget associated with restoring our readiness.”

But in a highly unusual about-face, just a few hours later, Allison Stiller, the career civil servant who is currently performing the duties of the assistant secretary of the Navy for research, development and acquisition, told a separate House hearing that the Navy had just received word that the administration had decided to “support” the purchase of two LCS ships in 2018. She did not make clear how the additional vessel would be funded.

Rep. Adam Smith (D-Wash.), the ranking Democrat on the House Armed Services Committee, was quick to criticize the sudden change in position.

“Whatever caused this reversal, it is obvious that President Trump is not making these decisions based on strategic considerations,” he said in a statement. “It shows a disturbing carelessness about national security and taxpayer money that he would casually fudge a request for a $634 million ship.”

Sen. Lindsey Graham (R-S.C.) indicated support for the Navy’s focus on rebuilding readiness in the 2018 budget, pointing out that its aviation fleet is, in some cases, in worse shape than its ships: 62 percent of the Navy and Marine Corps’s F-18 jets were grounded for lack of maintenance this year.

But he is not optimistic about the chances of the Navy’s plan becoming law, nor any other part of the Defense budget, since it violates the current caps set by the 2011 Budget Control Act to the tune of $52 billion.

Unless Congress adjusts or abolishes the BCA, the caps will remain in effect when fiscal year 2018 begins on Oct. 1.

“The budget proposed by the president doesn’t have a snowball’s chance in hell of passing, and I think it’s incumbent upon us to help the military better than we’re doing,” Graham said. “It’s already May, and there is no plan to fix sequestration. There’s not a bipartisan effort, there’s not even a sole-party effort to relieve the suffering that we have created for the men and women who serve from insane budget cuts at a time of great threat.” 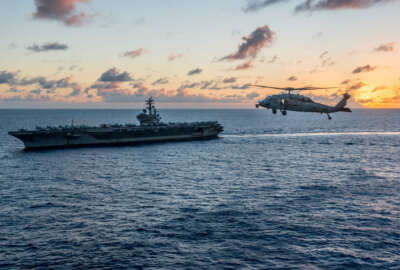 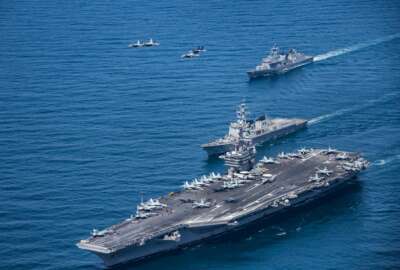