After five years of leadership, Dan Blair, president and CEO of the National Academy of Public Administration, has announced he will be stepping down.

In a press released Wednesday, a NAPA spokesperson said the Academy Board, Mark Pisano, a former director Environmental Protection Agency’s Water Quality Planning Division, would head the Academy’s search committee for a new president in the fall.

“It is with great regret that the Academy announces Dan’s decision to leave after more than five years of distinguished leadership, and we reluctantly accept his decision,” Paul Posner, chairman of the Academy’s board of directors, said in a statement announcing Blair’s resignation. “Dan effectively led the Academy with energy and dedication during extremely challenging times and I speak for the entire Board in commending Dan for his commitment and service to the Academy.”

Blair, a former deputy director of the Office of Personnel Management, said he would work with Pisano and the board to help choose his successor.

“The Academy is an extraordinary place and I have had the privilege to work closely with the fellows and an extremely dedicated and professional staff in pursuit of our unique mission to improve the quality, performance, and accountability of government. I thank Paul [Posner] for his leadership of the Board, and I am pleased to assist the academy in undergoing a smooth transition,” Blair said.

Dan Blair has been a frequent guest on Federal Drive with Tom Temin, where he has spoken on issues ranging from the upcoming presidential transition, to a pending postal reform bill, to the OPM data breach.

“The Academy will seek to identify leaders from government, private and nonprofit sectors who can build on the accomplishments achieved under Mr. Blair to expand the Academy’s service to public leaders across all sectors,” NAPA’s statement said.

The Academy is a nonprofit public policy organization with more than 800 peer-elected fellows.

A NAPA spokesperson told Federal News Radio that Blair would announce his future plans following his tenure at the Academy once his successor has been picked this fall. 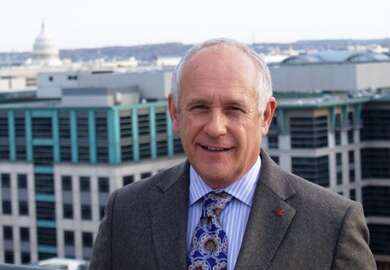 What should agencies learn from the OPM breaches?