As we — federal workers included — prepare for a long weekend of barbecues, warm weather and family fun, we too must remember the importance of the Monday holiday.

The U.S. has observed a day for recognizing fallen soldiers since 1868 — dubbed Decoration Day.

Memorial Day became an official federal holiday in 1971 and since then family members of lost service members have visited cemeteries or memorials, such as the decorated Arlington National Cemetery, to pay their respects. Many cities also hold parades in honor of those we’ve lost.

How are the agencies remembering the fallen? Federal News Radio compiled a selection of Tweets and Facebook posts from government social media accounts that are dedicated to remembering those who lost their lives in the line of duty to their country.

We celebrate #MemorialDay in honor of the brave men and women who died while serving in the #military. As we head in to the holiday weekend, please join me in a moment of silence for those we have lost in service to our great nation.

Spending a part of #MemorialDay weekend here at Arlington? #DidYouKnow that each year, more than 135,000 people visit the cemetery over Memorial Day weekend?

The National Archives also published a commemoration explaining the holiday and its importance. As tourists and family members shuffle into our nation’s capital this weekend, the Archives pointed out their shelves full of memorabilia and documents of Memorial Days past.

In some cases, federal workers were in the wrong place at the wrong time. Agencies too recognize former employees who died in the crossfire, such as the six diplomatic couriers from the State Department who lost their lives due to airplane crashes.

These men and women had one goal: Protect diplomacy at all costs.

In honor of #MemorialDay, DSS remembers the six @StateDept diplomatic couriers who have died in service to our nation. Read about these brave men on DipNote: https://t.co/961TxpCcSB #CouriersAt100 pic.twitter.com/40oXRXVDTd

The weekend will be full of Memorial Day parades, gatherings and speeches. Cleaning crews have assembled to dust pollen, bird feces and trash from on and around the monuments and memorials. Members of the military have also spent their time this week planting flags alongside the marble headstones in Arlington National Cemetery.

The Three Servicemen Statue is being cleaned ahead of #MemorialDay 🇺🇲 From removing pollen, to waxing and buffing, this is all part of preserving the Memorial site. We thank Russell Bernabo for his wonderful conservation efforts! pic.twitter.com/G3r7h5c2pl

Office of Personnel Management officials participated in a service walk this morning along the National Mall. Michael Rigas, deputy director, and Michael Dovilla, chief of staff, joined members of the Veterans Employees Research group to honor the fallen.

Other agencies, like the Federal Bureau of Investigations and Defense Information Systems Agency, focused on commemorating certain individuals who dedicated their lives and lost them in the line of duty.

And if you’re a federal employee and you don’t already have plans for this weekend, the Rolling Thunder organization will hold their slow motorcycle ride called the “First Amendment Demonstration Run” or “Ride for Freedom,” during the annual Memorial Day Parade on Sunday, May 27.

The cyclists begin at the Pentagon parking lot, cross Memorial Bridge and end at the Vietnam Memorial wall.

The National Memorial Day Concert will also air on Sunday at 8 p.m.

Stay tuned for a curated gallery of our federal government’s Memorial Day festivities. 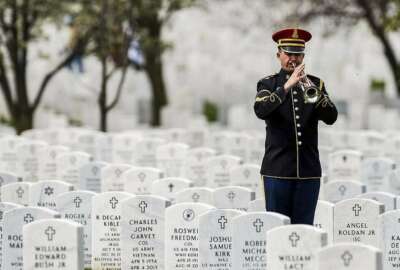