The Postal Service during the coronavirus pandemic has faced a surge in package delivery, initial challenges in getting enough personal protective equipment for its workforce and long-term financial challenges that could mean the agency runs out of cash to operate next year.

Amid all of this, a new postmaster general, logistics executive Louis DeJoy, took office Monday and outlined his priorities for the agency in a video message sent to all USPS employees.

The Postal Service during the coronavirus pandemic has faced a surge in package delivery, initial challenges in getting enough personal protective equipment for its workforce and long-term financial challenges that could mean the agency runs out of cash to operate next year.

Amid all of this, a new postmaster general, logistics executive Louis DeJoy, took office Monday and outlined his priorities for the agency in a video message sent to all USPS employees.

While USPS leadership and Congress have called for restructuring the agency’s long-term business model, DeJoy said he will help the Postal Service develop a business operating model that will allow it to meet its universal service obligation and put it on a “trajectory for success.”

“We have an expensive and inflexible business model that has largely been imposed on us and that we cannot easily change,” DeJoy said. “But I did not accept this position in spite of these challenges. I accepted this position because of them, and because I want to work with you in addressing them.”

Postal reform, he added, will include identifying “new and creative ways” for USPS to fulfill its mission with a focus on efficiency. That strategy will depend on building up USPS as a workplace “where people can have opportunities for promotion, enjoy a great quality of life and count on a secure retirement.”

DeJoy also said long-term USPS sustainability depends on the agency maintaining its reputation as the most trusted and respected agency in the federal government.

DeJoy has become the first postmaster general in more than 20 years to lead USPS without prior experience working there. But he spent his first day awarding his predecessor, former postmaster general Megan Brennan, the agency’s highest honor, the Benjamin Franklin Award.

The award dates back to 1960 and recognizes individuals whose work has led to “significant improvement of service to the public or general overall improvement of operations,” and whose accomplishments have had a unique impact on the Postal Service.

Previous incoming postmasters general have also given the award to their predecessors.

Brennan, the first female postmaster general and a career-long USPS employee, started as a letter carrier in Lancaster, Pennsylvania. While she expected to retire in January, Brennan stayed on the job as the USPS Board of Governors searched for her successor and led the agency during the coronavirus pandemic.

“Over the past five years, she has provided the Postal Service with strong and steady leadership under some of the most challenging circumstances. Megan [Brennan] has always put the interest of the Postal Service and its workers first,” DeJoy said.

Paul Steidler, a senior fellow at the Lexington Institute, wrote last Friday that USPS under Brennan’s leadership “performed its mission to bind the nation together, despite the formidable challenges.”

“With the onset of the pandemic and its historic logistics challenges, Megan Brennan’s calm demeanor and experience have been critical to ensure that the Postal Service has continued to function relatively smoothly,” Steidler wrote.

DeJoy said the Postal Service continues to serve as the “face of the federal government” to millions of Americans receiving 2020 census forms and ballots in the mail. But on that last point, the Postal Service’s role in delivering absentee ballots this year became the focus of the House Administration Committee hearing last Thursday.

USPS has told lawmakers the pandemic has reduced its revenue and put the agency on track to run out of cash in September. However, the agency also said it could keep operating through May 2021, if USPS and the Treasury Department can reach an agreement on the $10 billion loan guaranteed to the mail agency under the CARES Act.

“The first condition of successful expansion of vote-by-mail to protect our voting rights during the pandemic is to make sure we stabilize the finances of the Postal Service,” Dimondstein said.

Rep. Marcy Kaptur (D-Ohio) cited a “flood of logistical challenges” for vote-by-mail as the reason for a 20% lower voter turnout in Ohio’s Democratic primary in April. Among those challenges, Kaptur included delays in USPS delivering ballots.

“This is disenfranchisement plain and simple,” Kaptur said.

Much like his predecessor, DeJoy has begun his tenure with the USPS Board of Governors without a quorum. Deputy Postmaster General Ron Stroman stepped down earlier this month and former board vice president David Williams, also a former USPS inspector general, stepped down in April.

“The communities served by the Postal Service and its thousands of frontline workers deserve a more fulsome explanation regarding Mr. DeJoy’s selection, including whether the Board conducted the due diligence necessary to support its controversial choice,” DeJoy wrote. 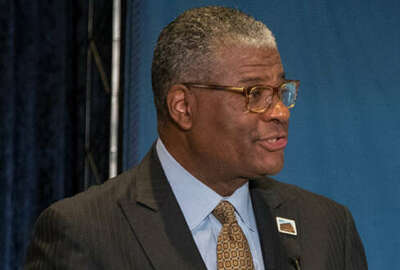 USPS board nominees see no ‘easy answers,’ but common ground for postal reform