Transitioning to a possibly new administration

Joe Biden has a new office in Washington, D.C., because as a major party nominee for president, he and his advisors are entitled to not only office space, but also computers, phones and support. It’s all part of the process from an updated transition law enacted in 2010. For an update, the Director of the Center for Presidential Transition at the Partnership for Public Service Dave Marchick spoke to Federal Drive with Tom Temin.

Tom Temin: Dave, good to have you back.

Dave Marchick: Thanks for having me.

Tom Temin: Give us an update – what is the status of transition in the legal sense? We’ll stay away from the politics today because we know those won’t be pretty.

Dave Marchick: Well, there are three parties that are really the critical parties. There’s the Trump White House, there’s the career officials across the agencies who are responsible for transition planning, and then there’s the Biden team. So let’s take this one by one. The White House has started and set up something called a White House Coordinating Council, where they focus on all the issues related to transition and provide guidance to the federal agencies. The federal agencies – there are about 20 that are part of an agency transition council and another 60 to 70 that are working on transition issues – and they’re the career federal officials are preparing for either outcome: A Trump re-election or a Biden victory. And then the Biden team, they released last week kind of an all-star cast of an advisory board and co-chairs have their transition. And they’re up and running. They have access to the GSA space. They have computers, they have access to security clearances. And really Sept. 1 was a critical milestone for the final phase of transition planning for the Biden team.

Tom Temin: Got it, and do we know is it possible to know whether they’re actually occupying that office space because given the pandemic and the shortage of Purel?

Dave Marchick: So what they’ve said is that they’re going to have a few people in the space and be very, very cautious. They’re going to follow the direction of the campaign. The campaign is pretty much operating remotely. They’ll probably have a few IT and operations people in there. But mostly, this is going to be the first transition in history, which will be remote transition.

Tom Temin: Sure, because normally those offices become something of a beehive I imagine as it gets closer to the election, and we never do know the outcome. So I mean, normally this would be a pretty busy place.

Dave Marchick: Traditionally, it is a beehive, both inside and out. Inside you have the people that are running the transition, they’re kind of the queen bee, and all around them they have people swarming. People that are working there, but also the job seekers, the suck-up’ers, the people that want to get involved. And there are actually reporters that stake out the beehive to see who goes in and who goes out to try to get tips on who might be in the cabinet.

Tom Temin: Interesting. So this isn’t happening this time. You know, when you have someone like a Joe Biden who has been in Washington since a very long time, does that make a difference? You have observed these for several cycles. Now when President Trump was coming in, there was zero Washington kind of establishment tail. Joe Biden has a very long one. Does that affect how transition can operate?

Dave Marchick: It sure does. You know, we started talking about Democratic candidates for president as early as January and basically advised them to ramp up in March, if they were still standing. In March, there were a couple of candidates still standing. And they started transition planning. And by now we’re about six, seven months into the transition planning. And Biden has perhaps the most professional, the most organized, and the most advanced transition team that’s ever been put together, in part because of his longtime standing and longtime experience in Washington. He knows that if he wins, he needs to be ready on day one.

Tom Temin: Right, so he has people around him that know the ropes, so to speak?

Dave Marchick: Absolutely. I mean, the key person is a guy named Ted Kaufman. Ted Kaufman was Joe Biden’s chief of staff, for many, many years. He succeeded [Senator] Vice President Biden when Biden became vice president. And Ted Kaufman is kind of the perfect person to run a transition. He’s a longtime trusted aide to the candidate, almost a peer. He knows Washington. He knows how to get stuff done. He’s an engineer so he thinks linearly, because transition is essentially a planning exercise. And what’s also unique is that Ted Kaufman literally wrote an amendment to the Presidential Transition Act when he was in the Senate. It’s called the Kaufman- Leavitt Presidential Transition Improvements Act. And so he is perhaps the best qualified person to run a transition in the country.

Tom Temin: We’re speaking with Dave Marchick. He’s director of the Center for Presidential Transition at the Partnership for Public Service. And where do the, say political operatives leave off and the transition people take over? That is to say, do they generally, both sides, try to keep the politics out of it and just stick to here’s what you need to know and here’s what we want to know for the policies we plan to put in place?

Dave Marchick: Well in the Trump White House, there’s a fellow named Chris Liddell. He’s the deputy Chief of Staff for policy. He’s a longtime transition hand, he ran Mitt Romney’s transition effort. So he’s a planner. And he’s running the process to prepare for a potential second term. And he does this by kind of keeping his head low, by doing his work and not trying to get the limelight. On the Biden side. The critical thing is how they plan to integrate the transition team with the campaign. That’s been a pain point in previous transition. The Carter administration basically had a blow up between the transition team and the campaign because the campaign didn’t even know about the transition team’s planning efforts. So what Biden has done is pretty unique. He has pointed a five-person, co-chair system, a governance council, and he’s included Anita Dunn, who’s really helping to run the campaign as part of that transition council. And what – the signal that that sends is the transition people led by Ted Kaufman and Jeff Zients and the campaign leaders are going to work together, be integrated, and hopefully avoid the tension that’s existed in previous cycles.

Tom Temin: For the incumbent administration, what do they primarily do to prepare for “transition” if everything is going to continue? Is it maybe replacement personnel effort for the most part?

Dave Marchick: If they win a second term?

Dave Marchick: So the history shows that almost half of the top officials in a second term turn over within six months of the president’s inauguration. So if you take the secretaries, the deputy secretaries and the under secretaries, almost half of them leave within six months. So what the Trump team needs to do is figure out who’s going to leave, who they want to keep, who they want to leave, and then plan to bring in fresh eyes, fresh legs, fresh blood for a second term. It’s a long haul. Bush replaced more than half of his cabinet in the second term, and Josh Bolten who’s been on my podcast which is called “Transition Lab,” said in hindsight, he wish they replaced more because people are exhausted. And you need new blood, fresh eyes, fresh legs.

Tom Temin: Got it, so we know what the platform is for the Democratic Party. To what extent – again, this is just looking back over history – do the actual policies and people that come in conform to party platforms, because often party platforms are these idealized documents that don’t really translate well into the the operation of government, which swings a little bit less severely than party platforms tend to?

Dave Marchick: I think the key thing is to look what at what Joe Biden has said, versus what the party platform has said. The party platforms are really developed by Democratic or Republican activists, and they tend to be a little more aggressive or a little more on the fringe of either political party. Typically, I would look at what the candidate says. And what the candidate says is pretty much what they try to do in office. It is best practice for a transition team to keep a list of everything that candidate says, and then plan how they’re going to implant those policies, should they win the election.

Tom Temin: All right. So in the mechanics of transition itself, getting back to the office space and the computers, what happens if anything, next between now and the election, and briefly what happens after the election presuming there’s a change in administration?

Dave Marchick: So right now, the transition team typically will work to beef up their processes, get their vetting systems in place, start to identify potential personnel and start to get ready. They also have a big operation, which is called the agency review process. Where, should they win, the Biden team will need to send somewhere between 350 to 500 people into the agencies the day after the election, to figure out what’s going on. What’s going to hit the fan, what’s going to happen 30, 60, 90 days – which regulations are coming out? Then post-election, the agency transition teams go in. They talk to all the career officials and they start developing their plans. Then they start to focus on personnel. What cabinet announcements are going to make first, are they going to put the White House staff selection first or the cabinet first? And then there’s another big program, another big work plan focused on what will the candidate, the president elect do every day in the 78 days between the election and the inauguration? Because those 78 days send a huge signal for how a Biden presidency will take place.

Tom Temin: Dave Marchick is director of the Center for Presidential Transition at the Partnership for Public Service. Thanks so much.

Dave Marchick: Thanks for having me.

Tom Temin: We’ll post his interview with FederalNewsNetwork.com/FederalDrive. Hear the Federal Drive on demand. Subscribe on Apple Podcasts or Podcastone. 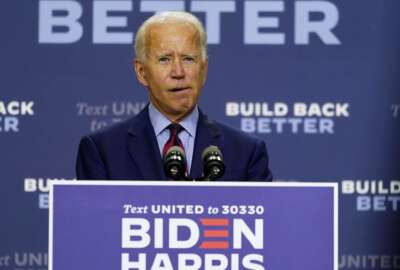