Your (copy) right to compensation

Usually, when people make something creative — a book, a photograph, a website — the person who made it owns the copyright, and anyone who wants to use that work needs to negotiate the rights to use it. That’s the general rule. But general rules don’t apply all the time, which is why we have lawyers. The...

Usually, when people make something creative — a book, a photograph, a website — the person who made it owns the copyright, and anyone who wants to use that work needs to negotiate the rights to use it. That’s the general rule. But general rules don’t apply all the time, which is why we have lawyers. The U.S. Copyright Royalty Board deals with a special part of copyright law where Congress has said rights holders don’t actually have a choice over whether their works can be used, but they do need to be compensated. The board has a new chief judge. He’s David Shaw. He talks about this specific part of copyright law with Federal News Network Deputy Editor Jared Serbu on the Federal Drive with Tom Temin.

Jared Serbu: Judge Shaw, thanks for taking the time to do this. I really appreciate it. A lot of people are probably not too familiar with Copyright Royalty Board. Can you just give us a really brief introduction to this concept of statutory law that you all deal with? And what’s the board’s basic function around that?

David Shaw: Sure. Well, first of all, we are at the Library of Congress. And the Library of Congress also has the U.S. Copyright Office, people are probably familiar with different types of intellectual property. But this is where copyright resides, more or less. And the Copyright Royalty Board, I think, in broad terms does two things. One is that we set rates when there is a dispute, that is to say, when parties haven’t reached a settlement or an agreement. By statute, we can set rates for the performance of sound recordings by various digital services over the internet, and it’s done periodically. People are probably familiar with various streaming services and that sort of things. We deal with music, mostly, I think that’s how a lot of people would know us. And then there are also distribution proceedings. There are funds that are collected and need to be distributed. And so if need be, we hold proceedings to help distribute the royalties.

Jared Serbu: And tell me if I’ve got this wrong, but my understanding of the special kinds of copyright that you deal with here are these situations that have been established by Congress where the rights holder doesn’t have a choice as to whether or not to grant someone a license to use their work, but they do have to get paid. And that’s where you come in. Is that is that a roughly accurate way of describing it?

David Shaw: Well, some people call it compulsory licensing. If that’s what you mean. And that’s true. But yes, as I said, people can reach agreements on their own. But people do also have to be paid. So that’s where the statute steps in.

Jared Serbu: Let’s let’s talk a little bit about your expertise. And what brought you to this job, my understanding of the board structure is that by law, each of the three judges actually are brought in for a specific area of expertise. There’s supposed to be an economics expert, they’re supposed to be a copyright expert. And there’s supposed to be someone who’s an expert in being a judge, for lack of a better term, your resume makes it looks like look like you check all three of those boxes, actually, which one were you actually brought on to fulfill and what brought you to the board?

David Shaw: Yes, we have a copyright expert, judge, we have an economic expert, a judge, and then I would be the one with the trial experience.

Jared Serbu: What attracted you to the position and maybe tell us a little bit more about your background?

David Shaw: Well, I’ve worked in intellectual property for well over 30 years. And I’ve done some copyright in the past. But I’ve always wanted to do more. And I’m interested in music. And I’m interested in technology, and I’m interested in trial practice, frankly. And this just again, ticked all those boxes, to be sure, I have a great deal of respect for the Library of Congress, I have to say that was part of the decision to come here. I also enjoy working with the copyright office, again, I have a great deal of respect for them as well. And that’s also was part of my, my decision to come here. I have followed music licensing on and off for many years. It’s just an interest that I’ve had, when I was very young, I had a little job in that area. It certainly didn’t make me an expert or anything. But it showed me what an interesting line of work it is and how important it is.

Jared Serbu: You’re relatively new to this job. So you don’t have a lot of experience of what the process or the experience of being a judge on this board is like so far, but you have been an administrative law judge for other agencies. And I’m just curious how much does the actual work and the experience differ from agency to agency as an ALJ?

David Shaw: Well, as you probably heard before, same but different. We do have procedural safeguards in place in all the agencies. Interestingly enough, because this is intellectual property, some of the companies and some of the law firms here are companies and law firms I’ve met elsewhere in the world of hardware, and so forth and importation previous positions that I’ve held. So there are a lot of similarities in running an administrative hearing from agency to agency. This is of course, involving rate setting, which is a little bit different than I’ve done before I have worked with royalty rates, and that sort of thing. But this will be a little different for me.

Jared Serbu: And for any lawyers who might be in the audience who maybe have a burgeoning interest in administrative law, what would you say about just the experience in general of being an administrative law judge? It’s obviously a career you’ve decided to stick with for a bit here. What what do you like about it? Why should people consider the profession?

David Shaw: Yes, thank you. I find it very fulfilling. I think it’s important that when, when people, individuals, companies interact with the federal government, it’s important that they have a fair process, whether they’re asking for something or a rate is being said something like that. I mean, I’m thinking of many, many different agencies. But it’s I think it’s good to have people like administrative law judges, to work with people who are interested in getting a fair record, a complete record, hearing people, I find it very fulfilling work. And that’s true here. It was true in previous agencies I’ve worked in and then I think is the same across government. I would point out one thing about federal government’s especially since we’re, I’m this network, people have asked me, how did you get your job? How did you get the last job? And the answer was USA Jobs. And people need to know, when you come to Washington and you’re looking for work, things are often advertised and competitively assessed and available. And I found the library advertising for this job and previous agencies I’ve worked for, did the same thing. And so I just point that out to people who are interested in advancing their career or coming to Washington.

Jared Serbu: That’s very interesting. I mean, the USA Jobs hiring process is not famous for being super quick, super efficient all the time. And people might be surprised to find out you can get a judge position that way, was it was it relatively painless to go through the process for you?

David Shaw: Well, each judge position I’ve had is that different requirements and processes, but it was, but it’s always been a good experience. Obviously, for me, I’ve advanced my career along for more than three decades that way, but it’s not just judging jobs as well. I mean, obviously, many, many federal jobs are advertised. And so I would just tell people that you should, obviously there are other sources of information, but it never hurts to check the listings at OPM.

Jared Serbu: Obviously it works. You’re the evidence. Thanks again for taking the time for this. I really appreciate it, judge.

David Shaw: Thank you. I appreciate it, too. 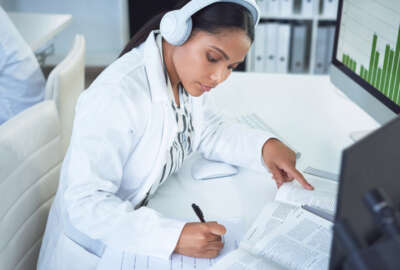 One sign of women’s progress: A rise in the percentage of copyrights they receive 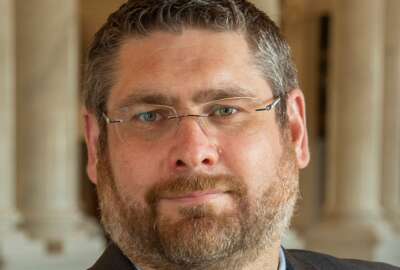