The Office of Management and Budget may be getting its chance publicly to make its case for the $3.1 billion IT Modernization Fund.

And by many accounts, the May 25 hearing before the House Oversight and Government Reform Committee is going to be a huge opportunity for administration officials to explain in straightforward terms why this initial seed fund is so important from a cybersecurity and from a delivery of services to citizens perspective.

The Office of Management and Budget may be getting its chance publicly to make its case for the $3.1 billion IT Modernization Fund.

And by many accounts, the May 25 hearing before the House Oversight and Government Reform Committee is going to be a huge opportunity for administration officials to explain in straightforward terms why this initial seed fund is so important from a cybersecurity and from a delivery of services to citizens perspective.

This opportunity comes as the fund doubters and pessimists are growing in number.

Over the last few weeks, several people have brought up to me whether I think the fund is dead on arrival, on life support or just getting started. At best, many government observers are split: it’s either on life support or has an outside chance of getting approved.

If you’ve heard Tony Scott, the federal chief information officer, speak recently, he will tell you there is progress on Capitol Hill. He will tell you about the meetings with lawmakers and how well they are going. Scott is expected to testify at the May 25 hearing.

The problem is evidence of those meetings is hard to find.

Several House lawmakers I talked to say they haven’t had recent in-depth discussion with OMB about the IT Modernization Fund.

“I’ve talked to OMB on a number of things, but I have not talked to them on that particular issue in detail. We have talked about it in general,” said Rep. Mark Meadows (R-N.C.), chairman of the subcommittee on Government Operations after the joint hearing on FITARA on May 18.

Rep.Gerry Connolly (D-Va.), said he supports the IT Modernization Fund, but also hasn’t talked to OMB about it recently.

“We’ve certainly have had multiple meetings with OMB, especially Tony Scott, to discuss multiple of issues related to IT and IT management, including implementation of [FITARA],” he said. “The investment fund itself has not received that much attention because we are dealing with 24 plans, lots of CIOs and an $82 billion a year IT procurement budget.”

A spokesperson for the Democrats on the House Oversight and Government Reform Committee said Rep. Elijah Cummings (D-Md.), the committee’s ranking member, has talked with Scott over the phone, but it was before the President introduced his proposal.

A Senate Homeland Security and Governmental Affairs Committee aide said, “OMB has briefed the committee staff on the administration’s proposal. The committee continues to review the information that was provided.”

“It’s hard to tell how much time the administration has been on the Hill. They are working it, but who are they talking to, what are they telling them is unclear as is whether they are working both sides of the aisle,” said one industry source. “I’ve heard they’ve had conversations with the House Appropriations Committee, but I don’t know if that means [Rep. Ander] Crenshaw [chairman of the committee] and/or [Rep. Jose] Serrano [committee ranking member].
I’ve yet to understand how this White House does outreach.”

The source said they strongly believe Rep. Steny Hoyer (D-Md.),  author of the IT modernization bill and minority whip, has met with Rep. Jason Chaffetz, chairman of the Oversight and Government Reform Committee, about the proposal, but it was unclear if Scott also participated in that conversation.

The biggest mistake OMB makes time and again when it comes to asking for more funding for technology–whether there is a Republican or Democrat in the White House—is their inability sell the need for new money to under-educated Congressional staff members and lawmakers.

Rep. Will Hurd’s comment at the May 18 hearing on the Federal IT Acquisition Reform Act (FITARA) is a prime example

“For those advocating for billions of additional funding to help modernize IT, I would suggest that savings from data center consolidation might be a better place to look than a new appropriation,” he said.

And as Chaffetz has said many times over the last year, the idea that agencies have received more than $525 billion on IT since 2008 and why throw more good money after bad also is a short-sighted reason for not taking a serious look at this fund.

As OMB and agencies have found over the last year, with 76 percent of that going for upkeep of legacy systems, the amount spent on modernization is more like $126 billion. A $3 billion request for modernization is really a 2 percent increase in spending, which isn’t all that much in the overall scheme of things.

But it will make a huge difference.

It’s also why OMB’s hard sell with lawmakers has to be around cybersecurity, not IT modernization. Uneducated lawmakers and staff will not see a 2 percent increase as significant enough to make a difference, but if it’s sold as part of a broader cybersecurity effort, it will more likely ring true.

Scott and others must do more to highlight to lawmakers in more discreet terms how modernizing applications will help ensure another mega data breach will not happen again, and the sooner agencies can update their systems, the sooner they make those assurances more than words.

That perspective is starting to gain momentum among some on Capitol Hill.

“The creation of this fund, which was included in the President’s Cybersecurity National Action Plan, would help agencies replace antiquated equipment and transition to more secure and efficient IT infrastructure — such as the cloud network,” Schumer wrote. “The fund would enable agencies to annually refresh their IT systems based on up-to-date technologies and best practices. Put together, these reforms could make substantial network improvements that could help save money over time.”

Rep. Robin Kelly (D-Ill.). ranking member of the IT subcommittee, also is floating a bill to require CIOs to conduct a governmentwide inventory of IT assets.

Part of the goal of the draft bill, which Federal News Radio obtained, would be to “determine which information technology investments are suitable for migration to a cloud computing service or cloud-based solution.”

Kelly’s bill also would require the federal CIO to develop governmentwide guidelines to determine which IT systems and applications are best suited to move the cloud, create performance metrics and targets and a timeline for agencies to meet these goals.

Even if this bill would pass, the IT Modernization Fund would be an important piece to get agencies beyond the paperwork stage and into the actual migration stage.

So be sure to pay close attention to Wednesday’s hearing as Scott’s performance and lawmaker reaction will set the path for the future of the IT Modernization Fund. 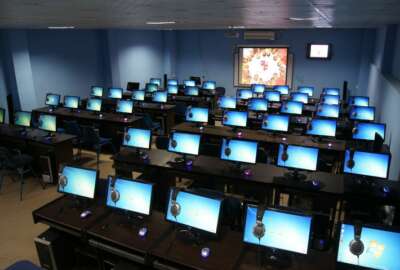 The state of federal technology: ‘A crisis bigger than Y2K’