Oracle is leaving the General Services Administration’s schedules program. It’s not going to just stop selling directly through the IT schedule, but the software giant will no longer use third-party resellers either, according to multiple sources.

Let that sink in for a second. One of the largest software vendors in the world is telling GSA, thanks, but we can live without you.

Sources said Oracle decided the GSA schedules just weren’t worth the hassle any longer — the compliance requirements, the potential and real threats of False Claims Act lawsuits and the new Transactional Data Reporting (TDR) rule, all played into this decision.

“The federal market is a very small chunk of their business and while it seems big for us, when you look at someone like Oracle’s overall business, they have to expend an exorbitant amount of resources for little payoff,” said Jennifer Aubel, a principal with Aronson Consulting, who said she wasn’t familiar with Oracle’s decision. “With the TDR and even with not having to do price reduction clause reporting, a company like Oracle would still have to do monthly reporting and there is a lot of concerns, including how GSA will keep the data secure.”

Oracle made $38.2 billion worldwide in 2015. Its direct sales to the federal government were $60.8 million in 2015, according to USASpending.gov. Even if it made just over $2 billion in federal revenue through its resellers, the federal market accounts for about 6 percent of Oracle’s total revenue. And disengaging from GSA doesn’t mean Oracle can’t sell through other contracts, such as the Army’s CHESS or through enterprise software agreements with the Defense Department.

Oracle’s decision not to sell directly off the schedule or through resellers isn’t a big deal on the surface as the company hasn’t had any direct sales since fiscal 2012 when it sold $298 million through Schedule 70. But its decision not to use resellers, such as Mythics or DLT Solutions or others, could be a signal of things to come for many other global IT companies.

The top five resellers, Mythics, DLT Solutions, Immix Group, Carahsoft and CDW-G, in no particular order, accounted for $1.7 billion in sales on Schedule 70 last year — about 11 percent of all spending, said Aubel. 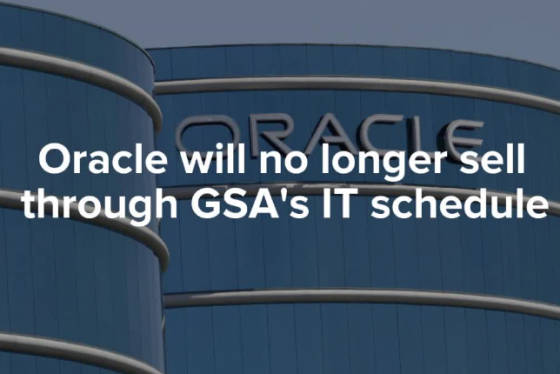 Oracle says so long to GSA’s IT schedule

Software giant Oracle makes a tough decision to opt out of GSA IT schedule.

While Aubel and other experts were unaware of Oracle’s reasons or plans, they say several large contractors are trying to limit their risk through the GSA schedules, and seeing a company such as Oracle totally drop off of GSA’s multiple award contracts could create a snowball effect of sorts.

Several sources said large vendors are growing weary of fending off lawsuits from the Justice Department on behalf of GSA over real or perceived violations of the price reduction clause and the False Claims Act.

Just look at what Oracle has been up against — over the past decade the company has paid $350 million to settle FCA complaints, including a $200 million fine in October 2011. Around the time of one of the largest FCA settlements, GSA also canceled Oracle’s professional services schedule contract, creating an even more contentious relationship between the two.

Sources said the final straw for Oracle — and potentially many other companies — may have been the 2015 FCA case where VMWare and Carahsoft agreed to pay $75.5 million to resolve allegations that it misrepresented their commercial pricing practices and overcharged the government on VMware software products and related services under the GSA schedule.

One industry source added several large businesses actively downplay the use of the schedules to their government customers.

“We clearly did whatever we could to minimize revenue on GSA schedules,” said one industry source, who requested anonymity because they still do business in the federal market. “There are a lot of other great contracts out here and  they don’t sue the people who use their contracts. Why do business with somebody who is litigious when you have 10 other choices that aren’t? It comes down to that simple question.”

The source said their former company minimized revenue to stay off of GSA’s radar and minimize risk.

“We looked at it this as serious extortion because GSA and Justice looked at our deep pockets,” the source said. “Why is Justice suing a lot of these large GSA contract holders? How come none of other contracts sue the companies they do business with?”

Army of lawyers to fend off lawsuits

The source said at their former company they paid massive legal bills to fend off Justice litigators.

“DoJ tried to sue us many more times and the only way to get them off back was to have minimal revenue because then liquidated damages doesn’t add up,” the source said.

Another industry source, who also requested anonymity, said anyone running a federal business can choose an army of lawyers and have the best and brightest contract people, but the threat of the lawsuit is overwhelming.

“Oracle may be changing its business practices because they don’t want to spend all that time in court,” said the source. “There aren’t any other lawsuits from other agencies that run governmentwide contracts. GSA tries to get good deals from corporations and they should, but when False Claims Act lawsuits occur, they say it’s not us, it’s DoJ where there is a problem, but DoJ is the enforcement arm for the government that is following the lead of the agency. I think the big difference is other contracts are really trying to figure out how to do things for mission with organization versus just managing a blanket contract. And if you think about what it takes for a company like Oracle to manage and ensure pricing is done in uniform way, it’s very difficult and it’s hard to guard against the cowboy out there giving a lower price. Meeting the requirements of the price reduction clause or the most favored nation’s status is one of the most difficult clauses.”

GSA referred questions about Oracle back to the company, but offered general comments about concerns over the False Claims Act and other compliance requirements.

“False Claims arise when a person ‘knowingly’ deceives the government. As such, GSA does not anticipate increased False Claims actions because there is no expectation of an increase in vendors ‘knowingly’ deceiving the government,” said a GSA spokeswoman. “Moreover, the new Transactional Data Reporting rule, and the new reporting website, will allow vendors more leeway to fix errors than the current 72A Reporting System. Vendors reporting transactional data will be able to submit data corrections through the new site on their own. Transactional Data Reporting will also provide greater ease of compliance with the removal of CSP disclosures and the PRC tracking customer provision. Reporting transactional data is based upon data used to generate a standard invoice.”

Patrick Finn, a principal at Finn Advisors and a former senior vice president of federal for Cisco, said GSA’s services are valuable, but they need to align more with the commercial sector.

“For example, while competing for business with other U.S. government vehicles, they are disadvantaged by their fee structures for use of their schedule,” Finn said. “In my experience, there seems to be a significant variance in how the regions conduct contract execution versus the D.C. area. One point in particular is the oversight and management of resellers who claim they are authorized to represent an original equipment manufacturer (OEM). This is particularly important in light of the heightened awareness for cyber and generally improved security practices. It’s not uncommon for an OEM to be contacted by disgruntled customers who procured through GSA only to find out the product was gray market or, worse, counterfeit and is looking for remediation on the hardware. It is crucial GSA works closely with OEMs to ensure only authenticate product be sold by GSA and that starts by having a strong partnership with the OEMs.”

Jim Williams, a former commissioner of the Federal Acquisition Service and acting GSA administrator, said the TDR is of great concern in industry and wonders if that is what’s driving Oracle away.

Williams, who is now a partner with Schambach & Williams Consulting, said he hopes Oracle’s decision is temporary and doesn’t cause other vendors to follow suit.

“GSA is trying to do the right things and the government is doing a better job of embracing industry as partners,” he said. “It had been ice age over last few years previously but now GSA wants better partnerships and lower costs to comply. When I say ice age, I mean across federal government procurement where large system integrators were seen as the evilest of evil. We saw government communications really shutting down. But people at GSA and others like DHS’ [chief procurement officer] Soraya Correa making a bigger effort to collaborate and communicate. That is the right way to go.”

Williams said agencies such as GSA, DHS and others are trying to bring more innovation to the federal market and losing a company like Oracle from the schedule dampens this effort.

GSA cancels one of Oracle’s IT schedule contracts