Rep. Will Hurd (R-Texas) proudly announced on Sept. 13 at the Billington Cybersecurity Summit in Washington that his baby was on the fast track to graduation. Of course, the chairman of the Oversight and Government Reform Subcommittee on IT was talking about the Modernizing Government Technology (MGT) Act and its inclusion in the Senate’s version of the National Defense Authorization bill.

In a few short days, the MGT Act went from being a shoe-in for the...

Rep. Will Hurd (R-Texas) proudly announced on Sept. 13 at the Billington Cybersecurity Summit in Washington that his baby was on the fast track to graduation. Of course, the chairman of the Oversight and Government Reform Subcommittee on IT was talking about the Modernizing Government Technology (MGT) Act and its inclusion in the Senate’s version of the National Defense Authorization bill.

In a few short days, the MGT Act went from being a shoe-in for the NDAA to some giving it less than a 20 percent chance of making it in the final bill.

Multiple sources said Sept. 18 is D-Day for version two of MGT and the NDAA.

Industry and congressional observers said Senate leadership will decide on Monday whether to add another set of amendments to the NDAA. If they do, sources said the MGT Act likely would be included.

If they don’t, Hurd and Sens. Jerry Moran (R-Kan.) and Tom Udall (D-N.M.) will have to find another path to the finish line.

“After very productive conversations with the Senate Homeland Security and Governmental Affairs Committee and Senate Appropriations Committee, Sen. Moran refiled MGT as an amendment to NDAA reauthorization this week and is actively working with Senate Armed Services and Senate leadership to have MGT included in NDAA manager’s package,” a Moran spokesman told Federal News Radio.

A Udall spokesman said the senator remains “optimistic that the MGT Act will pass the Senate soon, whether on the NDAA, as part of another vehicle, or as a stand-alone bill.”

An industry expert who has been following the bill said it took longer than expected to reach agreement among the administration, the Senate Homeland Security and Governmental Affairs Committee and the Senate Appropriations Committee.

“Basically, they ran out of time,” said the industry source. “The good news is this is cleared, so now they need to figure out what is plan B and how can they move forward. There are several options, including moving it under a unanimous consent. The challenge with that approach is the House would have to retake it up.”

The House passed the MGT Act in May by voice vote.

And the House would have to vote on it again because as Hurd said, there were a few tweaks on the Senate side.

The 22-page amendment that Udall and Moran filed with the Senate is similar to the House bill, meaning the tweaks are not obvious.

It still authorizes the centralized IT modernization fund at $250 million a year for two years, though House appropriators have not approved the Trump administration’s request for $228 million for fiscal 2018.

And most importantly, Hurd said, it creates the working capital funds for each agency to retain savings and reinvest to modernize legacy IT.

Hurd said even without the centralized fund, agencies will have an opportunity to modernize.

“If you are in an agency that is not in a position to save money through modernization, then going to some outside additional funds will not help,” he said. “I’d love to see all 24 CFO Act agencies be able to take advantage of MGT, but the reality is they will not. So making sure that these entrepreneurial CIOs have the tools they need to continue good activity has always been the focus of this bill.”

Hurd still is optimistic that MGT will move forward either way.

“We have been working pretty diligently over the last few weeks to ensure MGT moves and becomes law,” he said.

Hurd credited the Office of Management and Budget, the Office of American Innovation and many others for making sure MGT got through the hurdles.

The IT Alliance for the Public Sector (ITAPS) and five other industry associations reiterated their support for the MGT Act by sending a letter encouraging Sen. John McCain (R-Ariz.), the chairman of the Armed Services Committee and the NDAA’s floor manager, to include the Moran/Udall amendment in the defense bill.

Around contracting, ITAPs said agencies should make maximum use of commercial practices and products, while avoiding “one-size-fits-all approaches” and using acquisition approaches driven by mission requirements, including use of agile acquisition to promote innovation.

“These recommendations are a roadmap developed by tech industry experts for modernizing the government’s IT systems, strengthening our national security and enabling the government to do more for Americans while saving taxpayer’s money through efficiencies technology can offer,” Trey Hodgkins, ITAPs senior vice president for public sector, said in a release.

All of this action comes as the White House is accepting comments through Sept. 20 on its 36-point plan to modernize federal IT.

As of Sept. 17, the White House has received 10 comments.

While the passage of the MGT Act is not the be-all, end-all for IT modernization, waiting another session for Congress to take it up and pass it again sure would put a damper on these efforts.

The combination of strong commitments from OMB and Congress, plus leadership at the agency level is the only way IT modernization will be successful. So about that permanent federal CIO position and the 10 open CIO positions across the agencies … well, that’s for another time. 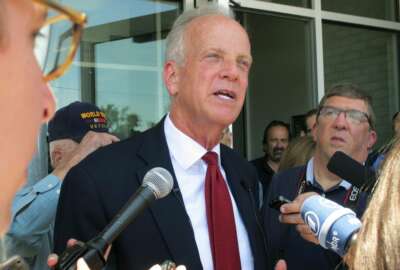