Subscribe to Federal Drive’s daily audio interviews on iTunes or PodcastOne
Amid the heated Capitol Hill debates on health care, tax reform and agency funding, lawmakers are actively working on legislation improving how policies are made and to learn how well federal programs work, with the help of government data.

Amid the heated Capitol Hill debates on health care, tax reform and agency funding, lawmakers are actively working on legislation improving how policies are made and to learn how well federal programs work, with the help of government data.

Ted McCan, policy assistant to House Speaker Paul Ryan (R-Wis.), said Thursday that senators and House members are very interested in evidence-based policymaking, and legislation based on a new report from the Commission on Evidence-Based Policymaking could come out within the next few weeks.

“I think you’ll see parts of the commission — from that access, the privacy side and the evaluation capacity side — all three of those will be included in the first round of legislation,” McCan said, during the Government Executive Fedstival 2017. “I do think we’ll probably take some of the easier things to sort of show momentum. One of the things we wanted to avoid was just having the commission be done, and then it just gets put on a shelf and there’s no action items surrounding it.”

McCan said thanks to the Open Data Act’s attachment to the Senate’s version of the National Defense Authorization Act, senators and House members are “very, very interested” in the report’s recommendations.

The report, called “The Promise of Evidence-Based Policymaking,” is the result of a year-long study, and includes 22 recommendations for agencies and Congress.

The overarching goals of the recommendations are to improve access to data, strengthen privacy around that data, and bolster the government’s evidence building capacity.

What the commission did not want to do, said Nancy Potok, commission member and chief statistician for the Office of Management and Budget, was to create another oversight tool for hardworking program personnel.

“The idea is that people who are really dedicated to mission, people who really want their programs to do what they’re supposed to do and be successful, don’t you want the information that tells you how you’re doing,” Potok said. “Not so other people can look over your shoulder and say you should be doing better or you could be doing a good job, but for yourself.”

Potok said when she was working in other agencies, there would be times she wanted information that just wasn’t available.

“You measure what you can measure with the data that you have,” Potok said. “Sometimes it’s not the right data, it’s not answering your questions. So as somebody who cares about your program, who’s responsible for it, and really wants it to be successful, this is actually for you.”

Among the report’s recommendations is the creation of a National Secure Data Service.

Potok said the service will help link records together, but not through a data warehouse. Qualified users will take the data they need to do a particular study, and then the data is sent back to its original owners and agency after it’s done being used.

“So it’s not that all the data in government gets put into a central data warehouse,” Potok said. “If you have a project or evaluation that you want to do and it requires confidential data, protected data, there is a service that is expert at this, that can link that for you, you can get secure access. That service would also do the kind of review before you could release the results of your research, to see could this be re-identified, what’s the risk of that. So doing that risk analysis kind of all in one place, but the data would not stay there and it’s not all in one place because that would be a really big target I think.”

Even if the data isn’t all in one spot, there is a need for agencies to build individual evaluation capacity, Potok said, so that they actually can look at the outcomes of their programs and make decisions to improve those programs.

That’s where the recommendations to appoint chief evaluation officers and establishing senior agency officials for data policy, can help.

McCan said there are a number of issues with access, including that agencies have different standards of how they can share data, as well as varying interpretations of statutes governing their ability to share data.

That’s limiting both for programmatic, and research and evaluation reasons, McCan said.

“Another place where the data access is limited is generally we have all this data that is collected under various pledges and all of that, and right now there’s no way for the agencies to really identify that data or make it usable in any way,” McCan said. “Which makes sense in a lot of cases and that’s the way it should be, but at the same time without anybody sort of going through that and figuring out ‘OK, are there ways we can de-identify this and make it usable to outside communities,’ that restricts in terms of what can be used.”

Another area where evidence-based policymaking can be useful is in program budgets.

Agencies and appropriators should want a well-supported funding plan, Potok said. While Congress passed a continuing resolution earlier this month to fund the government through Dec. 8, eventually the topic of federal funding will return.

“Really, evidence is a different way of talking about information and data that tell a story, that’s informing your decisions, whatever it is that you’re doing,” Potok said. “Having accurate data and information that can inform your decisions. So if you’re making policy about something and you’re looking at various federal programs, I think most people would agree that you want the program to work. You don’t want to spend a lot of money on something that’s not working well. How do you know if it’s working or not, you need data and there’s lots of ways of getting it.” 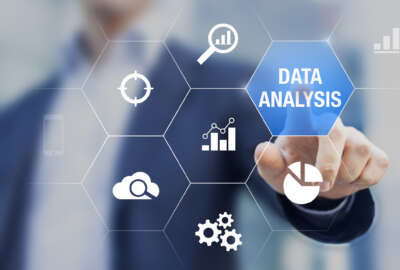