When the TV crew leaves, how is FEMA doing?

If you drive to Florida from, say, D.C., Lumberton, North Carolina seems like nothing more than a giant crossroads on Interstate 95. Every conceivable fast food, gasoline and motel chain is there. In reality, it’s a town and home to about 21,000 people. It was also one of the places hit hard by Hurricane Matthew. Some 2,000 people there were trapped by the flooding, many people found standing on their roofs.

So far, the storm has killed 22 Americans. The extent of property damage is still unknown. Tuesday morning a million were still without electricity.

Compared to a century ago, the country has advanced light years when it come to disaster planning and recovery. I was re-reading accounts of the September 1900 flood that devastated Galveston, Texas. That resulted in at least 6,000 deaths, mostly in a town with a population of 35,000 at the time. 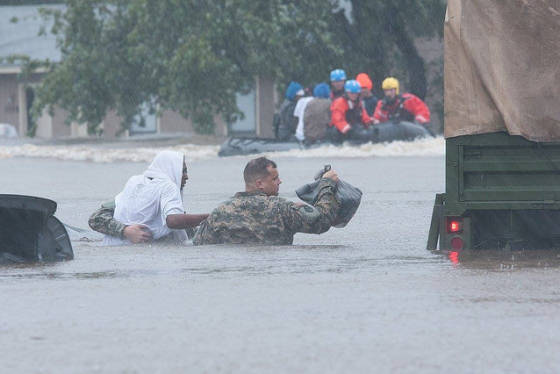 National Guard units were activated in several East Coast states over the weekend to help with the relief effort in the aftermath of Hurricane Matthew.

Today, the nation enjoys a much more robust and resilient infrastructure compared to a century ago. Supercomputing-charged weather forecasting lets people know up to a week in advance of the potential path and strength of a hurricane. Even when the power is out, cell phones still work. Federal disaster assistance exists and is supported by Congress.

Planning can’t change the weather, but it can improve the time between disaster striking and people getting their lives back together. That means getting them back into permanent housing with some semblance of financial wholeness.

Often, that still takes too long. Some people affected by Katrina in 2006 and Sandy in 2012 remain unsettled. I spoke with Zack Rosenberg, a D.C. lawyer who, with his future wife, relocated to the New Orleans area after Katrina and founded a non-profit to help with home rebuilding and other recovery services in St. Barnard Parish and other areas in the country. His outfit uses AmeriCorps volunteers.

Rosenburg describes a fairly bureaucratic process involving the Small Business Administration and FEMA that can have people waiting for months or years for relief if they don’t have private insurance. He recommends streamlining the process, for instance by having people in flood-prone areas pre-register for federal relief so they’re not filling out forms standing waist-deep in water.

Federal response, which appeared to lag after Katrina, has improved. FEMA, its mission revised then, is on the ground faster and has improved processes for reaching people. Once the storm has dissipated, though, and the excited television crews move on, the government’s work continues. How steadily things move from that point is the real measure of effectiveness.

How do FERS employees know they are financially ready?

This time it’s all in the family time!