How TSP uses social science to encourage participants to save more

Participants in the Thrift Savings Plan should expect a few more emails or even a phone call or two from the plan this year.

But the Federal Retirement Thrift Investment Board (FRTIB) says those emails aren’t supposed to be a nuisance or a bore. They’re supposed to help TSP participants save more for retirement.

The additional emails and phone calls are the result of a social science program the FRTIB launched last fiscal year.

The goal was to reach TSP participants in a way that prompts them to take simple actions, which could translate into tens of thousands of dollars in additional savings toward their retirement, Elizabeth Perry, the FRTIB’s social scientist, told the board last week at its monthly meeting.

A series of four outreach campaigns prompted some 43,000 participants to change the way they contribute to the TSP, resulting in some $34 million in additional savings, the FRTIB said.

In one outreach campaign, the agency sent a series of emails and made specific phone calls with the goal of prompting more participants to begin making “catch-up contributions.”

Under current law, TSP participants age 50 and older can make up to $6,000 in additional “contributions” to the plan each year. These contributions are commonly called “catch-up” contributions, and they’re designed to give participants of a certain age an opportunity to contribute a little more than the typical annual limit.

The TSP identified a group of nearly 3,000 participants who were turning 50 in 2019. The agency called and emailed these participants, reminding them of their opportunity to make additional “catch-up” contributions.

In total, these participants made an additional $300,000 in catch-up contributions, Perry said.

The FRTIB began sending more of these emails to an additional 1,700 participants in 2019. Of those who received an additional reminder, nearly 17% began making more catch-up contributions, Perry said.

In 2020, the TSP will contact another 6,800 participants with similar reminders.

The FRTIB conducted a similar experiment with its participants who were at risk of reaching the elective deferral limit too early in the year, meaning they’d ultimately lose out valuable matching contributions from their agencies.

The TSP sent three types of targeted emails to over-contributors. In the first type of email, participants received a personalized message that described exactly how much they stood to lose in agency matches if they kept contributing at their current rate. These messages included instructions, with links to a contribution calculator and other valuable tools, so participants could make the necessary changes.

The second type of email described more broadly how much other participants in similar situations have lost. These messages included similar calls to action urging participants to change their contribution rates. A third type of email included general information on the IRS’s annual elective deferral limits.

The targeted emails, the agency said, appear to have paid off. Roughly 38% and 36% of TSP participants who received the first and second type of email warnings changed their contribution rates and missed no agency matches.

The TSP’s general education campaign paid off as well: 28% of participants who received these emails missed no agency matching contributions.

In total, these participants received $400,000 in contributions that they would have otherwise missed out on, the agency said.

The TSP launched similarly designed campaigns for participants who had been automatically enrolled in the Federal Employee Retirement System (FERS). The goal, again, was to increase the contributions for these participants, Perry said.

“The median increase for both groups was about $140 per month,” she said. “If that amount is maintained until age 65 based on median ages, you’re looking at about $65,000-to-70,000 in participant accounts than would have been there, thanks to a few emails.”

The TSP scaled up this campaign in 2019 to about 63,000 participants with targeted emails and postcards.

A fourth campaign sent four different types of outreach emails to some 32,000 participants who aren’t contributing to the TSP.

Nearly 21% of non-contributors who received personalized pleas from the TSP began contributing.

An email stating “90% of civilian contribute; why not do the same,” solicited an 18% contribution rate among participants who received this type of message.

Another message that read, “Your agency already puts in 1%, why not join them?” prompted 16% of participants to increase their contributions.

Though the FRTIB acknowledged their outreach emails haven’t prompted a whopping number of participants to increase or change their contributions, the TSP outreach campaigns have fared better than similar ones in the private sector. 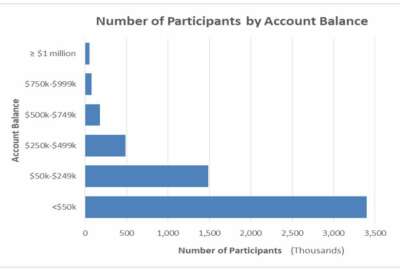