Erin Kidwell, a forestry technician working at the Forest Service, said that for decades, the agency and the National Federation of Federal Employees operated under a partnership agreement, where labor and management worked together to solve issues faced by the agency and the employees.

“We shared a commitment to collaboration. This permitted the union to be involved in many conversations beyond the issues traditionally bargained for,” Kidwell, a member of NFFE Local 1968, said Tuesday...

Erin Kidwell, a forestry technician working at the Forest Service, said that for decades, the agency and the National Federation of Federal Employees operated under a partnership agreement, where labor and management worked together to solve issues faced by the agency and the employees.

“We shared a commitment to collaboration. This permitted the union to be involved in many conversations beyond the issues traditionally bargained for,” Kidwell, a member of NFFE Local 1968, said Tuesday at a federal employee union rally on Capitol Hill.

But last year, after President Donald Trump signed three executive orders rolling back collective bargaining rights and official time, and making it easier for agencies to fire employees, Kidwell said the Forest Service severed all of its partnerships with NFFE.

While the court battle between the unions and the Trump administration continues over the executive orders, and an injunction remains in place, keeping many of the provisions from going into effect, Kidwell said attitudes in her workplace have shifted since those EOs were signed.

“The Forest Service was once an employer of choice, but our morale is plummeting, which is really shocking because we work in some of the most beautiful landscapes in the nation,” she said.

J. David Cox, president of the American Federation of Government Employees, said the goal of the rally was to give federal employees a “real voice on the job,” and reach collective bargaining agreements that both employees and management could approve.

A handful of agencies — including the Department of Veterans Affairs, the Department of Health and Human Services, the Social Security Administration and the Environmental Protection Agency — have already unilaterally implemented labor agreements on their employees after contract negotiations fell through.

“They’re imposing collective bargaining agreements that aren’t collective, that aren’t bargained for and they’re sure as hell not agreed to,” AFL-CIO President Richard Trumka said at the rally.

Dannine Johnson, an HHS headquarters employee and chief steward of National Treasury Employees Union Chapter 229, said the unilateral contracts have “made a mockery out of our collective bargaining.”

While her union platform provides her an opportunity to speak out about the contract, Johnson said “so many employees are afraid to speak out” at HHS out of concern for their jobs.

House Speaker Nancy Pelosi (D-Calif.) said the executive orders have taken an “unprecedented assault” on official time and “roll back due process rights.”

“The Trump administration can’t be bothered to fight for our tireless public servants,” Pelosi said.

The House version of the fiscal 2020 spending bill contains language that would prevent agencies from enforcing any collective bargaining agreement that has not been approved by union representatives.

“We need to make sure that that’s included in the final bill that comes out of the United States Congress,” Sen. Chris Van Hollen (D-Md.) said.

Attendees at the rally also expressed outrage at the lasting effects of the 35-day partial government shutdown that ended in January, and demanded Congress avoid another one at the end of September.

Fredric Rolando, president of the National Association of Letter Carriers, said the shutdown “imposed unacceptable suffering on hundreds of thousands of workers who keep our food pure, our air travel safe, our border secure and our people healthy.”

Trysh Moton, a senior aerospace engineer at NASA Goddard, said her coworkers faced uncertainty about the last shutdown, and urged lawmakers to avert a repeat scenario.

“I received a lot of text messages from our employees, a lot of people concerned about when we were going to go back to work and what we could do about it,” Moton said.

The Senate and the House, as part of budget negotiations, still need to reach an agreement on a federal pay raise for FY 2020. The House approved a 2.6% pay raise in its version of the spending bill, but the Senate version makes no mention of a raise.

Trump, however, reversed course last month and announced his support for a 2.6% pay raise for federal workers. While the decision came as a surprise to some, Rep. Gerry Connolly (D-Va.) said the sudden pay decision made sense to him.

“That’s because we’ve been pressuring from the other side all these years,” Connolly said. 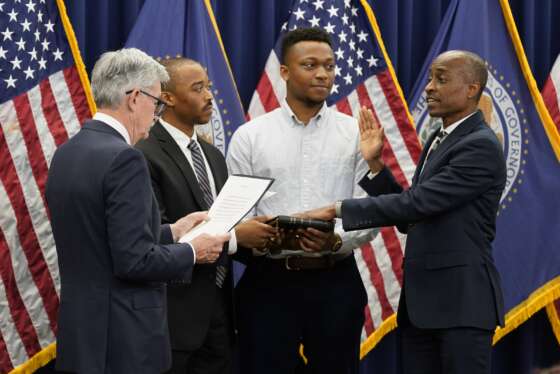