Correction: An earlier version of this story incorrectly stated AFGE was taking the Department of Veterans Affairs to court. No new lawsuit has been filed in this case. AFGE instead filed an unfair labor practice charge.

Labor relations at the Department of Veterans Affairs soured a bit during the Trump administration. And they haven’t gotten any better with Joe Biden in the White House. That’s according to the VA council of the American Federation of Government Employees. AFGE has filed an unfair labor practice charge against the department. Union attorney Ibidun Roberts joined...

Labor relations at the Department of Veterans Affairs soured a bit during the Trump administration. And they haven’t gotten any better with Joe Biden in the White House. That’s according to the VA council of the American Federation of Government Employees. AFGE has filed an unfair labor practice charge against the department. Union attorney Ibidun Roberts joined Federal Drive with Tom Temin Federal Drive with Tom Temin for an update.

Ibidun Roberts: Thank you for having me, Tom.

Tom Temin: And this back and forth has been going on some time, give us the latest developments.

Ibidun Roberts: Sure. This has been going on since 2017, when the Department of Veterans Affairs implemented the Accountability Act. And many of you will remember, President Trump at the time touted this law and what it would do for the Veterans Affairs Department. The issue was that the VA failed to bargain with the union over how they would implement that act. So we had to file a national grievance, we won that case, it had to go to the FLRA, the Federal Labor Relations Authority, to basically tell the VA you did have a legal obligation to bargain with the union. And they failed to do so. They asked the FLRA to reconsider that decision. The FLRA said the same, you have to bargain with the union, you were not excused from doing so. So we went back to the arbitrator, and he provided the relief for the VA failure to bargain. So that was in March of 2021. So it’s taken us since 2017 to March 2021, to have resolution from an arbitrator on this matter. And he resolved it by ordering the VA to bargain retro actively with the union. So that means we are to bargain as though they did not illegally fail to bargain and then apply it going back to 2017. And then he also awarded make whole relief. So whatever agreement we come to, not only does it have to be applied retroactive to 2017, but any employee who was harmed has to be made whole. And so we’re talking about the Accountability Act. So that included removal, suspensions exceeding 15 days, and demotion. The VA used it enthusiastically. So we have to date about approximately 5,000 individuals who were affected by the VA implementing this law without bargaining. So I told you this was back in March now that the arbitrator ordered retroactive bargaining. We are six months later and have been forced to file for enforcement with the Federal Labor Relations Authority, asking them to enforce the arbitrators award and make the VA come into compliance. So as you said in the beginning, we thought that this would just be the illegal conduct of the rogue administration. But what we’re finding out is this administration is very willing to embrace that illegal conduct and own it themselves and continue it.

Tom Temin: I guess you could say they’re all rogues in some sense here. But the fact that there are 5,000 people affected means that you’ve got a big caseload than of individual cases to resolve and somehow figure out, plus the entire process of bargaining back to 2017. So there’s a enormous amount of work here then left to do.

Ibidun Roberts: I would say it is enormous. And the sooner we start, the sooner we can finish. Unfortunately, the VA does not take that same approach. They are trying to delay and ultimately avoid having to account for their illegal conduct.

Tom Temin: And have you talked to anyone from VA about this? Even if they’re telling you they’re not going to do it, or they’re taking their time to do it. I guess my question is, is that the same people that you would be bargaining with during the Biden administration that were not bargained with during the Trump administration?

Ibidun Roberts: Well, see, that’s the thing. We don’t know who all is pulling the strings. Right now, it is the same attorney during the Trump administration. He’s a career employee, so he wouldn’t change. The political appointees would change. But it does appear they’re still putting people in place, who very much like what was going on during the Trump administration and want to see it through wants to continue it now. So we have talked to the attorney for the VA on this case. We have talked to their bargaining team because very similar to the Trump administration, they’re coming to the table. They’re just not willing to engage in what they’re legally required to do. They’re not willing to bargain in good faith, or carry out what’s been arbitrator’s award. So that’s what they did under the Trump administration, they would come to the table, and then bargain illegally. So that’s what we have going on. Now, they have no interest in correcting the failure to bargain in the past. And in fact, what they want to do is preserve their illegal implementation of the Accountability Act, instead of us going back and fixing and talking as though it hadn’t been implemented. What they’ve done is tried to have a sign off on the guidance they developed in 2017, in direct contradiction to the arbitrators award, which is we need to fix everything that resulted from their illegal implementation. As you know, federal employees have the opportunity to appeal to the MSPB or an arbitrator when they are fired or demoted or suspended more than 14 days. So I’m pleased to do that. We’ve had several employees who appeal to the MSPB, who appeal to an arbitrator. And this arbitrator said, you need to agree on what you’re going to do with those employees who have appealed. We’ve submitted proposals to the VA on what to do with those employees. The VA rejected our proposal and didn’t include any of their own. So they have thumbed their nose at the arbitrator who required us to come up with an agreement for employees who appealed, and they just refuse to do so.

Tom Temin: We’re speaking with Ibidun Roberts, she’s an attorney representing the National VA Council of the American Federation of Government Employees. And getting back to the bargaining sessions. What happens? I mean, you sit across a table in a room from the VA attorneys. And the union says, let’s talk about this, that and the other. What does the other side do? Do they whistle dixie? Do they play cards? I mean, how do they answer when you tell them these things?

Ibidun Roberts: Well, first, we are meeting virtually. So we are being as reasonable as we can with the VA, who wants to meet virtually. We’ve done that, we’ve exhausted that, we expect to start meeting in person soon. The other part there is the VA’s attorneys are not in the room. So while we believe they are advising the bargaining team, they’re not actually at the table. So when some of these conversations come up, the VA doesn’t have an answer. They’ve actually said to us one time, they had to go back to the VA attorney to find out what to do. So if they don’t even have the right people at the table to move us along, again, they’re already not bargaining in good faith, we’re required to have the appropriate people at the table to reach an agreement., and they haven’t done so. They’re not whistling dixie, but they are unable to respond.

Tom Temin: I’d love to see the side chat comments going on at some of those Zoom meetings that you can’t see, but the probably they can see among themselves. I’m just guessing here. And by the way, we should point out the Accountability Act is still in effect legally correct?

Ibidun Roberts: That is correct. They’re not using it. So part of what we received in the award was that they had to stop using it until they bargained with us. So you would think getting this done quickly would be in the VA’s interest. But for some reason, and not for some reason, they have had a number of setbacks with this law, including some recent court decisions. So I think what they’re trying to do is extract some benefit from the union, instead of having to correct what they’ve done before.

Tom Temin: And what is the date of the latest filing to the court to try to get the enforcement of the arbitrators action?

Ibidun Roberts: So with the FLRA we filed, it had to be about two weeks ago. We’re required to file unfair labor practice charges within six months of the date we should have known there was an issue. So here the arbitrator issued his final award in March, neither party filed exceptions with the FLRA. That means we both accepted the arbitrators award, but the agency has failed to implement each of the parts of the award in the past six months. So we filed it two weeks ago. And we expect to work with the DC regional office for the FLRA to proceed with enforcement of the award.

Tom Temin: And the interesting twist here is that the FLRA itself has a new composition under the Biden administration than it had under the Trump administration. So you would probably expect, I think, a somewhat more favorable responsiveness here.

Tom Temin: And by the way, how many VA employees are covered under this would be agreement.

Tom Temin: So now it’s just waiting for what the court does with respect to the FLRA and the arbitrator. Ibidun Roberts is an attorney representing the National VA Council of the American Federation of Government Employees. Thanks so much for that update.

Ibidun Roberts: Thank you for having me. 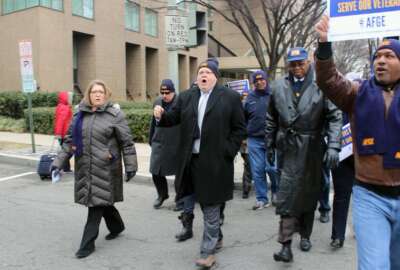 AFGE finally has a contract with VA. Now what?