Staffing – keeping all of its available positions filled with the right people has been an enduring challenge for the Department of Veterans Affairs. And VA has a model for staffing. But the VA Office of Inspector General finds the model somehow fails to translate into a clear picture of staffing requirements. For more, Federal Drive with...

Staffing – keeping all of its available positions filled with the right people has been an enduring challenge for the Department of Veterans Affairs. And VA has a model for staffing. But the VA Office of Inspector General finds the model somehow fails to translate into a clear picture of staffing requirements. For more, Federal Drive with Tom Temin turned to the Deputy Assistant Inspector General for Health Care Inspections at the Department of Veterans Affairs Julie Kroviak.

Tom Temin: Dr. Kroviak, good to have you back.

Julie Kroviak: Thanks so much for having me.

Tom Temin: And again, we’re talking not about the hiring process but the process for understanding of staffing requirements. And this report was something of high interest to Congress, wasn’t it?

Julie Kroviak: Very much so actually, it was directed by the 2020 Appropriations Committee. Basically, we were asked to look at VHA’s progress towards the development of a comprehensive staffing model, as well as a timeline for implementation of that model. We expanded the scope a little bit just to include some information about the hiring issues during the pandemic.

Tom Temin: Got it. And so you were specifically looking at the model. And I guess why the model doesn’t result in a clear picture for VA executives of the jobs they have open or the jobs they’ll need in the future. What is it that you found here?

Julie Kroviak: So if I could back up a little bit, you know, since fiscal year 2014, we’ve been putting out reports that describe VHA’s severe staffing shortages. And in each of those reports, including the last three, where we drill down to the facility level to get facility directors to cite what they perceive their needs to be, we always put forth a recommendation: Get a staffing model. That’s the only way you can understand what your facilities need to meet their demand. So those were always directed at the acting undersecretary, we always got concurrence, but actually, the issues remain long-standing despite their action plan.

Tom Temin: And is a staffing model something that other large health care organizations, say commercial hospitals and so forth, other nonprofit hospital chains, do they have them?

Julie Kroviak: Absolutely, staffing models can be a way for any organization clinical or not to identify their requirements more proactively and consistently. And even in a large healthcare system, like VHA, where the needs of local and regional populations can vary, this model can still provide an important framework for those hiring and even other budget decision making.

Tom Temin: So VHA then doesn’t have the same should not have the same precise staffing ratios and models for each of its 140 or so major health centers in the clinics, they have to tailor it to each location?

Julie Kroviak: Well, we actually would be in favor of one model that can be customized based on the local needs of the population and many larger hospital systems can and do do that. VHA has unique problems, because VA is also a collaborator in this decision making and design of the staffing model. So some of the things we found in this report added additional obstacles to getting this moving forward.

Tom Temin: And so what is the net result of this issue with a staffing model?

Julie Kroviak: So it’s a bit complicated, but overall, the fundamental issue concerns the effectiveness of VHA’s control over their use of manpower. A staffing model is just one of those controls, but it can set a framework that can guide the budget. Who do we hire? How many? Do we staff the care at the facility? Do we go out in the community? These are really important questions and really expensive questions. And right now they’re driven by an actuarial model, which is using historical workload data. But bottom line, VHA, the vision leadership, the facilities don’t have a standardized way to identify the requirements. So you’re left with a scenario where no one can weigh the funding against the need.

Tom Temin: And is that one of the reasons why there are so many openings at VA?

Julie Kroviak: They do have legitimate hiring challenges. And a lot of it goes back to the reports that we’ve been doing since fiscal year 2014 that talk about the compensation. So you know, competitive compensation is a big issue. There are geographical obstacles to meeting the demand and certainly in the more rural areas. So it’s a bit more complicated in that they don’t have the model. But the model is a critical tool to really understand need.

Tom Temin: We’re speaking with Julie Kroviak, deputy assistant inspector general for health care inspections at the Veterans Affairs Department. And what is directive 5010 all about? And how does that come to play in all of this?

Julie Kroviak: So it goes back to 2017. It was a memo from OMB that put out a requirement that all federal agencies reduce the size and cost of the federal civilian workforce. So VA, a few months after that, establishes VA Manpower, and from that two years later comes this directive – VA directive 5010. So there’s three primary offices at the department that are involved in what we – what the staffing model or how it would come to fruition, so you’ve got VA Manpower, you got VHA Manpower, and then you have this VHA Office of Productivity, Efficiency and Staffing. So 5010 gives VA Manpower, the responsibility of verifying, validating and approving the models. VHA Manpower is tasked with determining the workload a staffing levels, and then this Office of Productivity is tasked with just developing data reports to inform those staffing decisions at the local level. So through 5010, VHA Manpower has the responsibility for the development, but there’s no requirement or authority for implementation. So VHA and VA can go back and forth developing models getting them approved, but then there’s no authority to implement them, which is a significant gap in the policy.

Tom Temin: Yeah, sounds like they could generate a lot of shelfware. So what are your recommendations here for tightening this all up?

Julie Kroviak: So we made three recommendations to the undersecretary for Health. And basically, it’s to review the roles, the responsibilities and the number of staff required to develop, validate, but also implement these models. And they have to from there determine a timeline. Yeah, we can develop, we can validate but we’ve got to put them into place, and Congress is rightfully asking for a timeline as to what that’s going to look like. And then there’s another recommendation we make regarding some HR, smart VA’s human resources, software, that they weren’t living up to some of the requirements in that policy.

Tom Temin: Imagine software not living up to requirements. What a novel idea. And if VA can tighten all of this up and get these recommendations over the line, and by the way, do they agree with them?

Julie Kroviak: Yeah, so there’s concurrence. The problem is the coordination – VA and VHA, don’t look at the models the same way. And then there’s this missing opportunity to actually require implementation of them. So until VA and VHA actually are on the same page, cooperating, collaborating and agreeing, it’s hard to be optimistic that these models will actually be implemented and used.

Tom Temin: And if they were implemented and used in some nirvana, maybe they could all get out of Vermont Avenue and go to some neutral territory somewhere to discuss it, what would be the effect on staffing?

Julie Kroviak: It’s actually so important to know what you’re spending where and why. There’s nothing more expensive than health care, and you’re talking about a program that also provides care within VHA, but they purchase a ton of care too, and those are decisions that need to be based on a budget. Is it cheaper, better for us to buy cardiology at the facility down the street? Or is it cheaper and better for us to buy cardiologists and provide the care here? Without the model, it’s near impossible to make those decisions in any meaningful way.

Tom Temin: Even if they are heartfelt decisions. And while we have you, what about some of the pandemic hiring and pandemic staffing? What did you look out there? And what did you find?

Julie Kroviak: So we actually were looking at this surge and really trying to understand how VA managed itself in meeting those dramatic hiring needs during the pandemic. So first, we looked at workforce levels during the pandemic, but we also interviewed every [ Veterans Integrated Service Network] director, just to understand their perceptions of staffing during the pandemic. And by and large, the majority of the directors reported staffing needs were met. They had the surge that got them more staff and they also rearranged personnel to meet different type[s] of pandemic related demands. The VISN directors reported they were actually happy with the quality of the staff that were hired during the surge.

Tom Temin: And what happens is that staff now that the surge may not need it anymore?

Julie Kroviak: So the hope is that they remain permanent on that front. But you’re right, that will be another hurdle for VHA to try and retain the staff that were hired during the surge.

Tom Temin: Because those people need money to be kept on and that would come from Congress, and then there is the mission need for them and they might not match the staffing requirements of a nonpandemic period.

Julie Kroviak: Sure. And that’s not a problem that is unique to VHA hospitals. So understandably, there are a lot of unknowns out there.

Tom Temin: Julie Kroviak is deputy assistant inspector general for health care inspections at the Veterans Affairs Department. Thanks so much for joining me.

Julie Kroviak: Thanks for having me. I appreciate it. 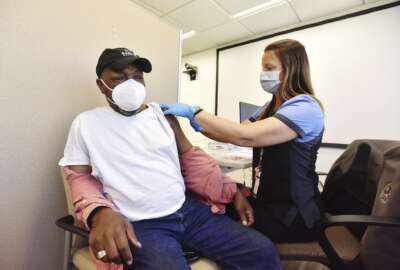 VHA employee vaccinations on the rise amid surge in COVID cases, deaths