The General Services Administration is losing one of its top officials to industry.

Norman Dong, commissioner of the Public Buildings Service at GSA, is headed to the Washington, D.C.-based Federal City Council, through the government’s Intergovernmental Personnel Act. He starts April 3.

Dong did not immediately respond to a request for comment.

GSA acting Administrator Tim Horne thanked Dong in a statement for his work at GSA.

“I have had the privilege of working with Norm for the last 3 years,” Horne said. “His leadership, work ethic, intelligence and perspective as a former customer helped make us a more efficient organization.”

A GSA spokeswoman said deputy commissioner of the Public Building Service, Michael Gebler, would be acting in the role until a permanent commissioner is appointed.

Dong’s departure was first reported by the Washington Post.

Federal City Council COO Kevin Clinton in a statement said the council was ‘grateful’ to GSA for lending Dong.

“As a non-profit, nonpartisan organization dedicated to the improvement of the District of Columbia, FC2 is devoted to projects designed to enhance the nation’s capital city,” Clinton said in the statement. “Mr. Dong’s knowledge of the District of Columbia and his expertise in public asset management will be a considerable contribution to our initiatives. His work will be limited to projects outside the scope of GSA’s purview and will not include initiatives related to his GSA portfolio.”

Dong took over as commissioner of GSA’s Public Buildings Service in early 2014. He previously worked as the acting controller at Office of Management and Budget (OMB), according to GSA.

Dong worked in Connecticut as a special assistant for finance and accounting in the Office of the State Comptroller. He also served the District of Columbia as deputy mayor for operations, and city administrator, under Mayor Anthony A. Williams.

The new commissioner will have a full plate when he or she starts. GSA has recently been in headlines for its its 60-year, $180 million lease of the Old Post Office building in Washington, D.C.

The Post Office building is currently the topic of a heated debate regarding a potential conflict of interest between President Donald Trump and what is now the Trump International Hotel.

Managing federal real property is once again on the Government Accountability Office’s High Risk List and GSA is also helping with the plans for the FBI’s new unified campus.

“There are some big decisions coming up, most notably on the FBI headquarters,” said former Public Buildings Service head Robert Peck, in an email to Federal News Radio. “That could be made before a new commissioner and administrator are installed. But the project then will be one the execution of which will be closely watched during their tenure.”

Ben Brubeck, vice president of regulatory, labor and state affairs at the Associated Builders and Contractors, Inc., said the commissioner’s role is important because “it oversees the federal government’s vast real estate portfolio, including the construction and maintenance of federal buildings.”

“Many of these GSA assets are underutilized, in disrepair or are bleeding money and would be prime candidates for public-private partnerships, if not for arcane government rules limiting innovative solutions that would help provide better outcomes for taxpayers and the GSA,” Brubeck said. 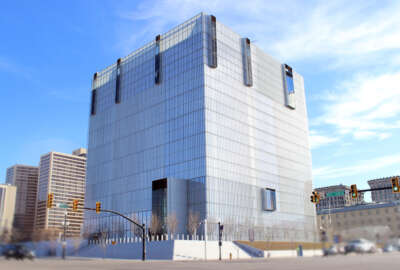