Union leaders representing field officers at Customs and Border Protection are calling on the agency to restore short-lived weather and safety leave schedules that, they say, limited their risk of exposure during the coronavirus pandemic.

Local leaders at the National Treasury Employees Union in March had reached agreements with the Office of Field Operations, which runs hundreds of ports of entry around the country.

Theses schedules varied by specific port of entry, but in general,...

Union leaders representing field officers at Customs and Border Protection are calling on the agency to restore short-lived weather and safety leave schedules that, they say, limited their risk of exposure during the coronavirus pandemic.

Local leaders at the National Treasury Employees Union in March had reached agreements with the Office of Field Operations, which runs hundreds of ports of entry around the country.

Theses schedules varied by specific port of entry, but in general, they allowed employees to spend 32 hours at their duty stations and eight hours a week on weather and safety leave. Employees on leave could be recalled at any time to return to their duty stations if the need had arisen, the union said.

The schedules, the union said, allowed CBP to implement “social distancing” guidance in a sense by limiting the number of employees in a particular space. It also gave CBP officers some time off to care for their children at home from school.

“Most people [got] either one or two days off every two weeks, which doesn’t sound like a lot,” he said in an interview. “And it’s not exponential. But it is a little more time away from being exposed.”

In an April 7 letter to acting Commissioner Mark Morgan and acting Homeland Security Secretary Chad Wolf, NTEU described the decision to provide these weather and safety leave schedules as “CBP at its best.” The schedules, the union said, were an outcome of labor and management working together during a crisis.

But CBP rescinded those schedules without warning on April 6, NTEU said. Officers who were on weather and safety leave that day had to come in to their duty stations.

A CBP spokesman said the workforce is “teleworking to the extent possible.” CBP’s Office of Field Operations has reduced the number of people at certain cites through telework, limited hours and weather and safety leave, the spokesman said.

“COVID-19 related requirements at the northern and southern land borders have led to the mobilization of CBP officers, who may have been previously authorized weather and safety leave,” the spokesman said in a statement to Federal News Network. “This decision was necessary to further ensure we protect the American people from the spread of COVID-19 as we prepare for the potential increased influx of migrants along our land borders who may carry the virus.”

But local NTEU leaders say the reasons for this decision are still unclear to them.

“To this date, we have still never gotten an explanation from our superiors of why,” Monahan said. “Nothing. CBP is just doing what it’s doing, and they don’t care to share it with their workers. I guess we don’t matter; I don’t know.”

At one point, the union said it was told weather and safety leave schedules had been rescinded so CBP officers could supplement the Border Patrol.

“We are always willing to support our colleagues at Border Patrol, but we have seen no evidence that additional support is needed,” a group of more than 50 NTEU local leaders said Monday in a letter to DHS. “In fact, many of us have been told by our Border Patrol colleagues that none is needed. Efforts to manufacture that need will be seen for what it is by employees and will only further promote distrust and undermine morale.”

Meanwhile, Monahan said he doesn’t have enough work to keep his officers busy. Traffic at his port of entry is down 70% to 80%, he said. His officers are stopping southbound traffic, where they’re checking cars for weapons, money or personal protective equipment.

“It’s just busy work, pretty much,” Monahan said. “What a waste. If you needed the people, that’s one thing. But if they’re not needed, why do you want to put them in harm’s way?”

Seven officers at Monahan’s site have tested positive for coronavirus, he said.

At least 236 employees have contracted the virus, a total that encompasses the entire agency, not just CBP’s Office of Field Operations, according to the agency’s public data.

The CBP spokesman said the agency’s senior medical officer and occupational safety and health team had “robust procedures to ensure that any member of the CBP workforce who is exposed to COVID-19 receives appropriate and timely medical evaluation, diagnosis and treatment.”

Employees at facilities where an exposure has occurred are notified as soon as possible, the spokesman said.

After the first officer was diagnosed with the virus at Monahan’s port of entry, he and other NTEU representatives arranged for employees to get tested off site.

“I’ll never forget it, because the managers here had no idea what to do,” he said. “You had co-workers of these people who were concerned obviously that they might have contracted it, but CBP didn’t know what to tell them.”

NTEU said some other chapters have made similar arrangements to test bargaining unit members.

Monahan said his port of entry does have masks and gloves, and CBP managers distribute the protective wear to officers at the beginning of each shift.

CBP has an online portal that details job-specific safety guidelines for employees, as well as other support resources for the workforce. Senior leadership are providing regular updates to employees on ways they can stay safe, the spokesman said.

“CBP has ensured that personnel who cannot telework have ready access to personal protective equipment (PPE), including nitrile gloves and N95 respirators, as well as comprehensive guidance for the use of that equipment,” the agency spokesman said. “We have also issued cleaning guidelines to all CBP facilities specifically to prevent the spread of COVID-19.”

Still, Monahan said the return to their regular work schedules during the pandemic has been difficult on his colleagues, especially those who aren’t from the area and don’t have an extensive family network to support them. Others are taking leave to take care of their children at home.

“We’re regular people,” he said. “We just have a job that requires us to go [to work] during these times. Just like during the furlough, we worked. We worked for nothing. But they need to understand that we had the same worries about our families as they do. We’re not asking for anything stupendous here.” 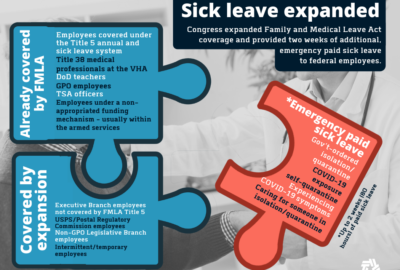 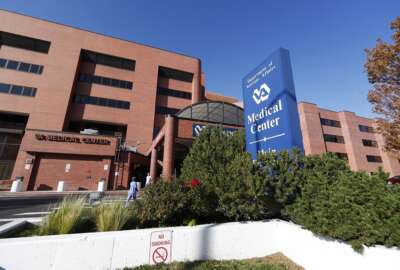 More than 1,600 employees at VA medical facilities have coronavirus