Few White House memos have sparked as much debate as the one telling agencies to stop presenting certain forms of training related to racial diversity and inclusion. The Sept. 4 memo from the Office of Management and Budget cited Critical Race Theory and white privilege training designed to portray the United States as inherently racist or evil, from...

Few White House memos have sparked as much debate as the one telling agencies to stop presenting certain forms of training related to racial diversity and inclusion. The Sept. 4 memo from the Office of Management and Budget cited Critical Race Theory and white privilege training designed to portray the United States as inherently racist or evil, from the words of the memo. Whether this type of training exists and whether it should, Federal Drive with Tom Temin spoke with people on both sides. Among those in favor of the memo, from the right-leaning National Center for Public Policy Research, was Senior Fellow Horace Cooper.

He cited the departments of Defense, and Health and Human Services  as agencies where such training has occurred, but when Federal Drive asked see samples of slide he had obtained, Cooper declined. Federal Drive also reached out to OMB for evidence that this type of training is going on, but the agency has not responded.

Tom Temin: Do you have any knowledge or evidence that this type of training for diversity and inclusion that has elements of critical racial theory, do we know that this is actually happening in the federal government?

Horace Cooper: Oh, absolutely. In fact, as a former federal employee, I’ve talked to my colleagues and associates and friends, and I’ve been actually hearing about this throughout the summer. A few actually sent me clips of some of the training. Thanks to COVID-19 instead of people sitting in a room, and hearing this, they’ve often been doing it via electronic means, which means that you can take photos of the screen. And what we see are the kinds of things that it was amazing that in America in the 21st century, is allowed to be promoted, and certainly to be promoted with taxpayer dollars. That’s the outrage.

Tom Temin: And what is specifically being promoted in these sessions?

Horace Cooper: What’s being promoted in these sessions is that employers and supervisors should understand that they and their employees are more likely to be motivated by their race and their gender, than by the specific and individual experiences that they bring to bear. That their expectations with regard to what is considered high performance, what is considered poor performance are not a function of a good supervisor’s experience over time, but are instead merely the byproduct of having come from a particular race. They actually use the word “caste” as a way of describing different categories. This type of mindset is a lot more akin to what was promoted during South African apartheid as a way of justifying to their population, why certain groups were disfavored, and why other groups needed to be favored. This again, it’s an outrage, that this has been allowed to go forward, and no one had been paying attention to it.

Tom Temin: Because diversity and inclusion related training goes back many, many years – it’s not something that happened, you know, in this year or the year before – is there a, in your view, a proper way to have this type of training that people can be sensitized to racial issues? Should it happen in the first place, do you believe?

Horace Cooper: Well, so there is a really significant question here, as to the nature of the need. In the 21st century, our federal workforce, our federal employment system or the federal government, is probably the most diverse employer in America. And the idea, therefore, that this particular employer, which sets remarkable accomplishments in terms of the number of minorities and number of women who are able to serve, that this employer is actually in need of instruction on it does raise an important question. But it’s not that there is no value to diversity, there’s no value to racial tolerance training – there just is no value to either of those when they masquerade as saying that simply, we can just break it all down as if you’re white, and if you’re a male, you are the problem. Just imagine if we had a federal government training program that said, if you’re black, and if you’re female, you’re a problem? Everyone would immediately understand that that would not be appropriate. And yet this program masquerades as promoting tolerance, masquerades as promoting diversity, when actually what it does is the very kind of thing that happened at the beginning of the 20th century in the United States of America. And we refer to it as Jim Crow policies that singled people out on the basis of their race as a way of deciding who would be rewarded and who would be penalized.

Tom Temin: Now in the justification for training of one sort or another, and we’ve just talked about the debate there but, presuming there is some need for this, the people in favor of this type of training cite the fact that if you look at Blacks in government, Hispanics in government – they do have good representation at the nonmanagerial levels. But at the management levels, there’s this big fall off that is out of proportion with their population in the nonmanagerial ranks. And that’s often cited as, for some reason they’re not being promoted on the basis of race. So how do you discuss that one?

Horace Cooper: When you actually hold for actual educational attainment and experience, what you see is those with advanced degrees, those with relevant work experience, or actually advantaged in our federal system, it is those who are not with those advanced degrees, and those who do not have the relevant experience that are finding it a challenge to move forward. However, the real question is, if Black Americans or brown Americans or any minority community are represented in the federal government, “in the lower ranks,” doesn’t that mean that there are other positions outside of government where they’re not represented? Are we going to go to those entities and say, “Well, wait a second, why aren’t you represented?” The problem here is still that there is no idea about what choices individuals make. Some of our public schools in many communities don’t perform well. Some communities have a history of not making educational attainment a priority, it might be hard to go and fix those kinds of problems, but when you simply attempt to adjust just for race, or just for gender, in a particular workplace setting, you’re doing – whether you say it’s a nice thing, whether you say it’s a unkind thing – you’re doing the very type of thing that happened as a result of Jim Crow. And one of the things that I think your listeners might want to understand is, everybody today says, “Well, of course, it was wrong for Jim Crow, of course, it was wrong to practice this kind of segregation.” But there was a time when universities thought that this kind of separation was valid, that it was legitimate, that it was useful. The idea of it being promoted, as being useful and valuable, does not change the fact that singling out people on the basis of physical characteristics that they have no control over, is, in fact, an evil idea, and is always an evil idea.

Tom Temin: Just getting to the fundamental issue, though, does bigotry exist, and does discrimination on the basis of race exist, and are there means and ways to stop that from happening?

Horace Cooper: That’s a fair question. But the fair question has an implication: Are there people who happen to be white, who happened to be male who are discriminated against? I think that question is never presented. When they ask the question, “Does bigotry exist? Does racism exist?” They never say, does every single American run the risk of being in a setting where that occurs? The second thing is, how much does the bigotry and the racism that does exist regardless of how it manifests itself? Explain the circumstances that we have? And those two together I think, go a long way. We have all too often made it possible for people to assume that only one group of Americans have setbacks, only one group of Americans have struggles, only one group of Americans actually ever experienced unfairness. All the other non-group in that category, their lives are amazing and wonderful, and they never have setbacks. Well, that’s false. And that’s why we ought to be focusing on individuals. That’s why if you actually have an instance of discrimination, you are allowed lawfully to seek out an investigation and have a determination made. Wholesale statements that just because of your gender, or just because of your race, that proves that you have in fact been discriminated against, is again, the very same sort of premise that underlies the decisions for Jim Crow and South African apartheid.

Tom Temin: Horace Cooper is senior fellow with the National Center for Public Policy Research. He also said Health and Human Services and the Defense Department are agencies where this training has occurred. We did ask for samples of the slides he was sent, but he declined to give them to us. We also have requests in to the Office of Management and Budget for evidence that this type of training is going on and so far, no answer. Find this interview at www.FederalNewsNetwork.com/FederalDrive. Subscribe to the Federal Drive at Apple Podcasts or Podcastone. 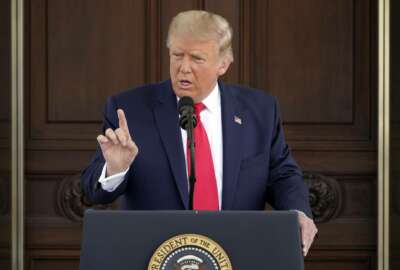