Building off lessons learned from programs to retrain federal employees for cybersecurity and data science jobs, the Chief Financial Officers Council is developing a strategic workforce plan for the financial management workforce.

Steve Kunze, the Commerce Department’s deputy chief financial officer, said a working group within the council expects to release a strategy early next year focused on the “workforce of tomorrow” within the CFO community.

Building off lessons learned from programs to retrain federal employees for cybersecurity and data science jobs, the Chief Financial Officers Council is developing a strategic workforce plan for the financial management workforce.

Steve Kunze, the Commerce Department’s deputy chief financial officer, said a working group within the council expects to release a strategy early next year focused on the “workforce of tomorrow” within the CFO community.

Kunze said the CFO Council working group has spent nearly a year, along with the Joint Financial Management Improvement Program, which includes the Office of Personnel Management, the Government Accountability Office and the Treasury Department, in shaping the strategy.

Much of the year, he said, was spent conducting an “environmental scan,” reviewing more than 1,200 papers and articles from academics, consulting firms and professional organizations, looking at the trends that will likely reshape the federal financial workforce 15-to-20 years from now.

“Data and technology are the two things that are going to be driving what the financial management professional is going to be living, and what that environment is going to look like,” Kunze said Wednesday at ACT-IAC’s virtual ReImagine Nation ELC conference.

This year marks the 30th anniversary of the CFO Act, and several reports, including one from the Government Accountability Office, have highlighted the changing responsibilities of the federal financial community.

Based on what it’s learned so far, the CFO Council working group will build out several “future scenarios” for the federal financial workforce and identified common skill sets and competencies that employees will need based on these trends.

The working group is building out common themes from its findings, and crafting short and long-term goals for agencies to meet under this financial management workforce strategic plan.

The team will submit the strategic plan to the full CFO Council for review and approval. But Kunze said he’d welcome collaboration from the CIO Council, which has played a major role in standing up the Trump administration’s cybersecurity reskilling effort.

“There’s no reason for us to be reinventing the wheel, so what we’d love to do is continue that partnership as we move forward,” Kunze said.

Shila Cooch, the director of IT Policy in the Office of the Federal Chief Information Officer within the Office of Management and Budget, said the Cybersecurity and Infrastructure Security Agency, meanwhile, is expanding OMB’s framework for the cyber reskilling program, which so far has trained two cohorts of federal employees.

While only a few employees who enrolled in the program went on to take cyber jobs elsewhere in government, Cooch said the reskilling program provided a “safety net” to federal employees who had an interest in developing cyber skills, but weren’t sure if they’d be a good fit.

The program helped employees gain valuable skills and some have moved into new positions within their agencies, which demonstrates that that reskilling concept works well in government, Cooch said.

“We found that it’s easier to reskill staff and quicker than it is sometimes to hire people in from outside. With clearances and trying to get people through the door for the federal government, sometimes it takes a while to bring people in,” she said. “We found that staff who are already here, who love the mission, that want to be a part of something are more apt to jump at the chance to learn a new skill and give back to their organization.”

OMB, meanwhile, has also launched a data science reskilling program for the federal workforce, built on a successful pilot within the Census Bureau and on some of the lessons learned from the cyber reskilling program.

The federal workforce, however, has been impacted by more than just emerging technology and a demand for new skills, Dorothy Aronson, the National Science Foundation’s chief information officer and chief data officer, as well as the co-chair of the CIO Council’s workforce group, said the council expects to release an addendum to this year’s “Future of the Federal IT Workforce” report looking at the impact of the COVID-19 pandemic. 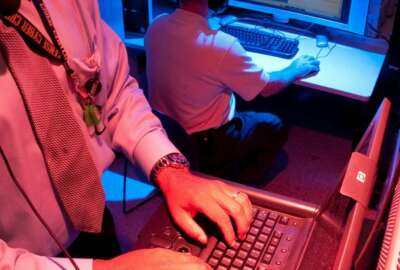