Tom Temin: Ms. Greszler, good to have you one.

Rachel Greszler: Hi, Tom, thanks for having me.

Tom Temin: What is your take on Schedule F and the executive order behind it?

Rachel Greszler: Well, I think this is really a common sense change that’s gonna result in better stewardship of taxpayers money, and it could actually improve morale because we know that a lot of federal workers have a high level of dissatisfaction with the lack of accountability that there often is in the federal government. And so I think that if it makes sense, especially for these individuals who are in confidential, policy determining and policymaking positions to have more accountability. They should never have immunity from being accountable to the potential impacts that they have on American lives. And when I think about this, I think about it in relationship to the private sector. Imagine if you have a CEO of a company and they’re told, look you cannot do anything to discipline or dismiss managers who refuse to carry out your directives, or who actively try to thwart your initiatives. And that’s often the case right now within the federal government. I don’t think it happens often but it’s possible for it to happen because the avenues through which managers have control to impose any type of discipline or dismissal are so difficult and burdensome that they just don’t go about trying.

Tom Temin: There’s a couple of issues here. One is, I guess, accountability of all federal employees, and that does come up in the surveys year after year is that employees don’t think there is enough accountability. But in this excepted service, there is the issue of policymaking. I guess my understanding was the model here is that the political appointees that come in via the plumb book appointments are the ones that set policy, and the career civil servants simply implements it. But are their career civil servants that set policy? What are some examples there?

Rachel Greszler: Well, and that’s where I don’t think that it’s always black and white that there are just those policymaking positions, and there are those simply career ones. And I think that that’s what this Schedule F is trying to get at is that often those people who are in charge of setting the policy are relying the career staff to give them the information they need to help write the regulations to carry out these initiatives. And I’m assuming based on this order, that there has been difficulty in getting some of those individuals to comply with them. I think back to the last administration, and what if you had a situation where those who were supposed to set up the Obamacare exchanges simply refused to do their jobs because they didn’t believe in that policy or if they tried to thwart them and wanted those policies to fail, certainly, they should be held accountable, and they shouldn’t have three or four different avenues through which they can appeal decisions, there shouldn’t be a mountain of paperwork in a year or a year and a half long process required to do anything to dismiss or discipline that worker.

Tom Temin: There’s really no statistics that I’ve seen that are reliable on how many people might be affected. The criteria for being in Schedule F includes promulgation of policy or advocating for policy, seems to be much more wide than those that actually create or write policy. Does anybody know?

Rachel Greszler: Yeah, I don’t think that we do know, I’ve seen estimates from thousands to 10s of thousands, even 100,000. But I think it’s really gonna depend on the agency. And the order does give a lot of discretion to those agencies to determine which positions they think should fall under this category, and some have more of those types of attorney supervision, policy writing positions. So I think it will vary significantly. But regardless of how many workers are shifted into this new category F of federal workers, I really think that the order is unlikely to affect many of those workers because the overwhelming majority of federal employees are upstanding individuals, they’re providing valuable knowledge and experience that the managers in the agency heads don’t want to lose. It’s only those bad apples who are derelict in their duties, or they’re outright trying to thwart their agency’s actions that would need to worry about their job security. No federal employee should ever lose their jobs simply because of their personal or political beliefs. But if they refuse to do their jobs, because of those beliefs, then they need to be held accountable. And it’s important to know that this order doesn’t wipe out all protections. The order maintains protections for this new category of workers that prevents adverse actions, which is discipline or dismissal based on partisan affiliation, based on whistleblower status, and also a number of other protected characteristics.

Tom Temin: Yeah, that’s been the other statement that people have made against the order is that it is kind of a wedge for undoing civil service protections that date back to the foundation of the civil service as we understand it today rooted in Title Five. But Title Five seems to be impervious to change by Congress, even though they complain about this. Nobody ever does anything about Title Five.

Rachel Greszler: it does. And I think that that’s part of the reason why we see this order happening is a lot of people would agree that there needs to be action comprehensively addressing all federal employees, not just this category F ones, but it’s very difficult to achieve any action on that. But when you talk to federal managers, and it doesn’t matter which administration they’ve been a part of, they will routinely say that it is incredibly difficult to get rid of individuals who are just underperforming, whether they’re refusing to do their job, or they’re actively going against what should be done. And a lot of them come in there, and they say, I want to do the right thing, I’m going to get the good people in here and I’m going to make sure that people are held accountable. And then when they realize what the process is actually like, and all that paperwork, and all the legal procedures that they go through, and the fact that these employees can just appeal their decisions through three different forums, and that it can drag on for a year or more — the managers have told me, look I couldn’t even do my job that I was hired to do, I couldn’t run this department or this agency because I was spending so much time trying to comply with disciplining or dismissing this problematic worker that I just gave up on it. And you end up having these individuals who are sitting there still on the payrolls and somebody else is having to do their work. And that should never be the case. So this is something that needs to be addressed comprehensively. But that’s not something that an executive order can do, it would have to come through Congress.

Tom Temin: Now the political appointees, they’re gone when the administration changes in general and the president, if they’re smart, will fill those jobs with people that will carry out the wishes the President was elected on. What about the hiring flexibilities? That’s the other fear that has come into the community is that squadrons of ideologues could be brought in because there is withdrawal of the Merit Systems system on hiring these people.

Rachel Greszler: Well, this is the other side of the equation here. It’s not just the firing, it’s also the hiring. And that’s an extremely important role for these agencies. I think this will actually give them more authority to evaluate their potential job candidates based on qualities that we know are really important, such as their prior experience and duties, their work ethic, their judgment. As it is now, most of these positions, all of these career positions, go through the OPM. And to make the process fair, there are a lot of metrics, there are some preferences. And oftentimes, those procedures can prevent agencies from hiring individuals that would actually be the best one to meet their needs. And so I think this is actually a more beneficial part of the order here. And this is going to benefit whoever the next administration is because it will allow them to fill these positions more quickly and based on the characteristics that they know to be best for their agencies and their departments.

Tom Temin: Getting back to the other side, what about the possibility that there’s another 10, 20, again we don’t know how many, thousands of people could also be let go wholesale just because they are in the policy jobs? I mean EPA is the agency that comes to mind the most, where policy toggles most visibly back and forth, how many parts per million or what should be the regulation of this waterway system and so on. And there is that possibility, then that administration could wipe out a bunch of career people just on principle because they were connected and did policy for the prior administration? Isn’t that possible?

Rachel Greszler: I suppose it would be possible. But it wouldn’t be a smart decision by any new administration to do that, because these people have valuable knowledge and expertise that they have gained over years, and they know how to do their jobs, and they usually are doing their jobs well. And so that’s a big asset for regardless of which administration is in power. So I wouldn’t worry too much about that. And there’s still the protections that are in there, I couldn’t imagine it being possible for the administration to just come in and wipe out every schedule employee because there are protections against partisan affiliation and other characteristics in there still.

Tom Temin: I guess people were seeing the language in the order saying that it would be easier to remove people, let’s say a shorter probation, period, and so on. And that’s I think the takeaway that the community seems to be getting is that the protections would be pulled completely. You’re saying not so.

Rachel Greszler: No, not completely. I think that anybody who’s smart is going to realize these people have value and as long as you’re doing your job these aren’t supposed to be partisan jobs. They’re just in the policy making policy determining character. So as long as you’re performing your job, I wouldn’t be worried about this order and its impact on you.

Tom Temin: Rachel Greszler is research fellow in economics budget and entitlements at the Heritage Foundation. Thanks so much for joining me. 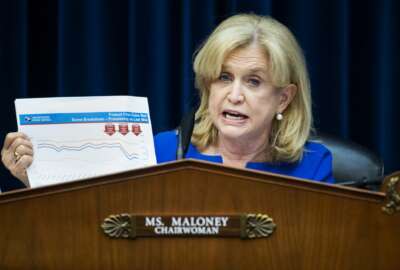