Democrats on the House Oversight and Reform Committee are asking that the Trump administration “immediately cease” implementation of the president’s recent Schedule F executive order.

They’re looking for any communications relating to the development of the Schedule F EO, as well...

Democrats on the House Oversight and Reform Committee are asking that the Trump administration “immediately cease” implementation of the president’s recent Schedule F executive order.

They’re looking for any communications relating to the development of the Schedule F EO, as well as any internal or external analyses describing the order’s impact on federal employees and their agencies.

“We write with grave concerns about the executive order President Trump issued last Wednesday to create a new Schedule F category for federal employees,” members wrote in a letter to Michael Rigas, acting director of the Office of Personnel Management. “The executive order is a harmful attack on the integrity of our government because it will permit the replacement of non-partisan civil servants with partisan Trump loyalists. Tellingly, it was developed in secret with no consultation whatsoever with our committee, which has direct jurisdiction over the federal civil service.”

A small group of people within OPM and the Office of Management and Budget knew about the EO before its release, multiple sources told Federal News Network.

“It remains unclear … to what extent the White House or federal agencies have analyzed the potential impacts of this proposal on federal workers and the agency missions they carry out,” House members said. “Implementing this new policy without conducting such analyses could have disastrous effects on the services on which the American people rely.”

In an email, agency spokeswoman Rachel Tripp said OPM had received the letter and will respond “as appropriate.”

House Democrats gave the administration two weeks to respond to the committee with the right documents, which also include any correspondence with employees at the Heritage Foundation about the order and any communications with other agency officials seeking their input, questions or concerns.

Under the executive order in question, agency heads have 90 days — until Jan. 19 — to review confidential or policy-making, determining or advocating positions and propose positions to reclassify under a new class in the excepted service, known as Schedule F.

The EO allows agency heads to hire or fire employees to these appointments at will. And it applies to both existing career federal positions and future ones, meaning current employees in certain policy-making roles may lose their civil service protections.

It’s still unclear how exactly the reclassification process will work for federal employees who currently hold a policy-making position.

Committee Democrats said OPM officials briefed members on the Schedule F executive order last week. Employees who hold a position up for reclassification can be removed from service and won’t have the ability to appeal those decisions, they said.

The Saving the Civil Service Act, if passed into law, would prevent agencies from using congressionally-appropriated funds to implement the order. It would also block the administration from converting positions or employees in those positions to a Schedule F appointment.

If any positions or employees are converted to Schedule F, the legislation would reverse those decisions — and reinstate those who may have lost their jobs with back pay. 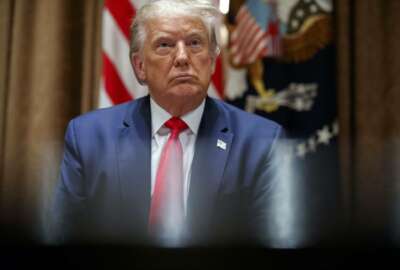