To implement the president’s recent executive order banning certain kinds of diversity and inclusion training, the Office of Personnel Management will pause all such programs across the executive branch while it conducts a mandatory review of agency materials.

“OPM must review and approve training materials before they are used, even if those materials have been utilized in...

To implement the president’s recent executive order banning certain kinds of diversity and inclusion training, the Office of Personnel Management will pause all such programs across the executive branch while it conducts a mandatory review of agency materials.

“OPM must review and approve training materials before they are used, even if those materials have been utilized in the past,” Dennis Kirk, the agency’s associate director of employee services, said Friday in a memo.

“All diversity and inclusion training for federal employees is on hold, and may not proceed, until those materials have been submitted to OPM and OPM has reviewed and approved those materials.”

Later Friday afternoon, however, OPM removed the sentence from the memo.

OPM declined to comment on the discrepancy. Rachel Tripp, an agency spokeswoman, said OPM had no further comments on the memo.

With the omitted sentence, OPM is abundantly clear: all training in the executive branch, even programs that are ongoing, are on hold pending a compliance review. But without the sentence, the current memo, as it stands, may present some confusion for agencies about whether they need to cease any training that’s ongoing.

The memo implements parts of President Donald Trump’s executive order, which he signed last week. The EO bans certain kinds of diversity and inclusion training the administration deems “divisive,” and it restricts agencies from adopting training programs that teach, for example, “one race or sex is inherently superior” to another or that “any individual should feel discomfort, guilt, anguish or any other form of psychological distress on account of his or her race or sex.”

Federal employees who approve or authorize such training anyway may be subject to discipline, according to the EO.

According to OPM’s latest guidance, all departments, agencies, commissions and boards in the executive branch are subject to the order. It applies to all diversity and inclusion training, including any programs established before the issuance of the EO or planned for the future, Kirk said.

“Included is training that is conducted or led by government employees; training that is conducted or led by contractors or others; live training sessions conducted in person or by any electronic means, whether telephonic or video; materials posted on any federal agency’s public-facing or internal Internet or Intranet sites; and, written or video materials or other content that have been produced or procured with federal funds and that are available to the general public or that federal employees are required or permitted to read or view,” the memo reads.

To submit diversity and inclusion training materials to OPM for review, departments and agencies must gather and submit everything as one complete package, Kirk said.

It’s unclear how OPM will ensure agencies have effectively paused diversity and inclusion training while reviews are ongoing, but the memo directs department heads to report non-compliance to FEDalerts@omb.eop.gov. OMB Director Russ Vought announced the creation of the inbox on Twitter shortly before the EO’s release last week.

Further implementation guidance on the EO will come out later, Kirk said.

“OPM will not accept requests for approval of individual training sessions,” the memo reads. “OPM will review materials in the order that they are submitted, under the first-in-first-out (FIFO) business rule and will provide analysis and feedback as quickly as possible.”

OPM’s guidance follows a memo from the Office of Management and Budget, which it released earlier this week.

Neither the executive order nor the OMB memo explicitly suggested a temporary ban on all diversity and inclusion training is coming, though both documents say OPM will review and approve agency programs and materials for compliance.

The OMB memo reiterates the training at the center of the president’s executive order “constitute a malign subset of a larger pool of federal agency trainings held to promote diversity and inclusiveness.”

And the OMB memo goes on to state: “The President and the administration believe the fair and equal treatment of individuals is an inviolable principle that must be maintained in the federal workplace. Agencies should continue all training that will foster a workplace that is respectful of all employees.”

OMB does instruct, however, that agencies identify all diversity and inclusion training held during fiscal 2020 and their costs. OMB encouraged agencies to conduct a review of those training programs, suggesting a keyword search for terms such as “critical race theory,” “white privilege,” “intersectionality,” “systemic racism,” “positionality,” “racial humility” and “unconscious bias,” might be helpful when searching through their curriculum.

In addition, OMB instructed agencies to appoint a senior political appointee to review and approve any spending on diversity and inclusion training.

Months of social unrest amid multiple incidents of police killing unarmed Black people have prompted large organizations, including some agencies and military branches, to reexamine their diversity and inclusion initiatives.

Democrats on the House Oversight and Reform Committee asked the administration earlier this week for documents explaining its decision to ban certain kinds of diversity and inclusion training. 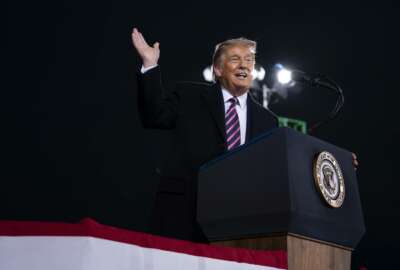 Trump expands ban on US money for certain diversity training