This story was updated on Wednesday, Jan. 20 at 9 p.m. and again on Thursday, Jan. 21 at 9:30 a.m. to include additional details about the president’s executive orders.

President Joe Biden took a series of executive actions on his first day in office, reversing some Trump-era policies for federal employees and contractors and creating a slew of new responsibilities for federal agencies.

The president signed more than a dozen executive orders and memos Wednesday...

This story was updated on Wednesday, Jan. 20 at 9 p.m. and again on Thursday, Jan. 21 at 9:30 a.m. to include additional details about the president’s executive orders.

President Joe Biden took a series of executive actions on his first day in office, reversing some Trump-era policies for federal employees and contractors and creating a slew of new responsibilities for federal agencies.

The president signed more than a dozen executive orders and memos Wednesday evening, including one that mandates mask-wearing for federal employees and contractors while inside government buildings and on federal lands. It also requires members of the public to wear a mask while visiting federal spaces.

The mandate came in the form of an executive order, which the White House released Wednesday night.

It calls on the Office of Personnel Management, General Services Administration and the White House COVID-19 response coordinator, a new position that Biden also created via executive order, to release more guidance to agencies on the mandate.

Individual agencies can make case-by-case exceptions to the mask mandate where appropriate, and the EO encourages leadership to consult with employees, contractors, federal unions and others about the new requirements.

The COVID-19 response coordinator will also work with agencies to ways to incentivize mask wearing, the EO said.

Beyond the mandate itself, the EO also establishes a new federal workforce safety task force, led by OPM, GSA and the COVID-19 response coordinator. Other agencies, including the Centers for Disease Control and Prevention, Federal Protective Service, FEMA and the Office of Management and Budget, among others, are task force members.

The new group will advise agencies on government operations and continuity, as well as employee safety, throughout the pandemic. The task force will address at least a dozen topics, including testing, employee telework and commuting options, IT infrastructure needed to support remote work, contact tracing, social distancing and vaccine distribution.

In addition, the EO calls on the Department of Health and Human Services to develop a COVID-19 testing plan for the federal workforce.

“This plan shall be based on community transmission metrics and address the populations to be tested, testing types, frequency of testing, positive case protocols and coordination with local public health authorities for contact tracing,” the EO reads.

He instead signed a new executive order, designed to, as the administration put it in a recent fact sheet, begin “the work of embedding equity across federal policymaking and rooting out systemic racism and other barriers to opportunity from federal programs and institutions.”

Under this new executive order, Biden will direct federal agencies to conduct a review of the “state of equity” within their organizations. Agencies will have 200 days to detail their plans for addressing unequal barriers within their programs and policies.

In addition, the EO creates a new working group that will identify and review potential inadequacies in existing federal data programs and policies.

“Many federal datasets are not disaggregated by race, ethnicity, gender, disability, income, veteran status or other key demographic variables,” the EO reads. “This lack of data has cascading effects and impedes efforts to measure and advance equity. A first step to promoting equity in government action is to gather the data necessary to inform that effort.”

The chief statistician and the federal chief technology officer will lead the new equitable data working group. The federal chief information officer and chief data officer are members, as well as several other agencies.

“For too long, diversity and inclusion issues within government have not been taken seriously,”  Chad Hooper, president of the Professional Managers Association, said Thursday in a statement. “Issues of inequality both within our workforce and the administration of tax law have been seen as too difficult to be worth addressing. PMA looks forward to working with the Biden administration on rooting out issues of systemic racism and diversifying leadership in the federal government to better reflect the people we serve.”

In repealing Trump’s order, Biden called on agencies to review any actions they may have taken within the last few months to cancel or pause diversity and inclusion training. Agency heads should consider reinstating canceled contracts or rescinding previous actions, the EO said.

Biden also took several steps to reverse Trump-era regulatory policies. He repealed six executive orders from Trump, including a 2017 EO that required agencies to repeal two actions for every new regulation they created.

He also repealed a 2019 order, which urged agencies to treat guidance as non-binding documents.

Notably, Biden directed OMB  to offer up its own recommendations for improving and modernizing the regulatory review process.

Ron Klain, the new White House chief of staff, also issued a blanket freeze on new regulatory actions. The temporary pause will give the incoming administration time to review the regulations the Trump administration advanced during its final days in office.

Specifically, Klain asked agencies to consider postponing rules that have been posted to the Federal Register but haven’t taken effect yet for another 60 days. He also suggested agencies reopen the public comment period for another 30 days.

The memo also directs agencies to confer with OMB before renewing any regulatory activity.

In addition to these executive orders, Biden has identified dozens of environmental actions that agencies have taken in recent years. The new administration will ask the Environmental Protection Agency, Agriculture, Interior and Energy Departments, among others, to review those actions and ensure they comply with Biden’s new priorities.

Finally, Biden signed a new ethics executive order, which details the pledge and ethical contract that all executive branch appointees in his administration will be required to take.

In one of the final acts of his presidency, Trump released the members of his administration from the terms of their ethics pledge, which he issued back in 2017. Former President Bill Clinton issued a similar order in the final weeks of his own presidency, allowing former appointees to go directly into lobbying. 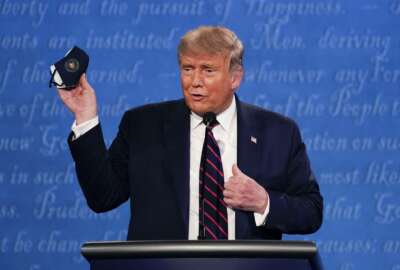