President Joe Biden told State Department employees Thursday that his agenda for the agency will focus on rebuilding workforce morale, strengthening interagency coordination and promoting diversity within the diplomatic ranks.

In his first visit to the State Department’s headquarters during his administration, Biden told a new class of Foreign Service officers — joining virtually — that he would focus on ensuring they feel “trusted and empowered” to do their jobs.

“I want the people who work...

President Joe Biden told State Department employees Thursday that his agenda for the agency will focus on rebuilding workforce morale, strengthening interagency coordination and promoting diversity within the diplomatic ranks.

In his first visit to the State Department’s headquarters during his administration, Biden told a new class of Foreign Service officers — joining virtually — that he would focus on ensuring they feel “trusted and empowered” to do their jobs.

“I want the people who work in this building, and our embassies and consulates around the world, to know I value your expertise, and I respect you. And I will have your back,” Biden said.

In an effort to better align the State Department’s mission with the work of other agencies, Biden is instructing Defense Secretary Lloyd Austin to conduct a global posture review of military forces “so that our military footprint is appropriately aligned with our foreign policy and national security priorities.”

Secretary of State Antony Blinken, he added, will work closely with Austin on this review of military forces. Blinken, in his introduction of the president, said he and Vice President Kamala Harris “know how vital the State Department is to American security and prosperity.”

Biden also highlighted his administration’s focus on cybersecurity within the scope of national security.

“We’re launching an urgent initiative to improve our capability, readiness and resilience in cyberspace,” Biden said.

As part of this work, the Biden administration will have an opportunity to finalize the State Department’s work on standing up a Bureau of Cyberspace Security and Emerging Technologies.

The State Department, under the Trump administration, told Congress it intended to create the bureau in 2019, but former Secretary of State Mike Pompeo approved the creation of the bureau only in the final days of the Trump presidency.

The Government Accountability Office, in a recent report, found the State Department hasn’t actually created the bureau yet, and that State hasn’t kept other cyber agencies in the loop with its plans for the bureau.

Meanwhile, Biden said the State Department under his administration will make it a top priority to promote diversity, equity and inclusion within the agency’s workforce.

“Our diplomats, at all levels, should reflect the full diversity of this great country,” he added.

Blinken has made it a top priority to address the diversity challenges. During his confirmation hearing, he told the Senate Foreign Relations Committee he would immediately hire a chief diversity officer who will set benchmarks for diversifying the agency’s workforce and share those updates with Congress.

“I will view it as a significant measure of whether I succeeded or failed, however long I’m in the job, whether or not we have finally put in place the real foundations to make sure that we have a workforce in the State Department that looks like the country it represents,” Blinken told the committee last month.

Biden, who signed an executive order overturning a Trump administration review of governmentwide diversity and inclusion training, said he will make it a top priority to address systemic racism not just at the State Department, but at all agencies.

“Racial equity will not just be an issue for one department in our administration. It has to be the business of the whole of government and all our federal policies and institutions,” Biden said.

Through an executive order, Biden will increase a cap on the number of refugee admissions into the United States to 125,000 people in the first full fiscal year of his administration. Biden said he’ll direct the State Department to consult with Congress about making a “down payment on that commitment as soon as possible.” 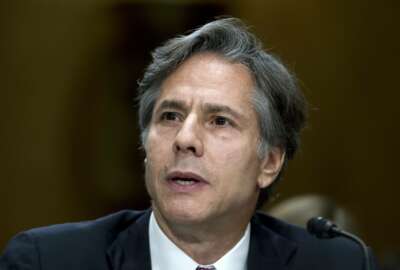