Members of the Senate Finance Committee know the clock is ticking for the IRS to make some big changes ahead of next tax filing season. They also realize the agency faces these challenges with a shrinking budget and workforce.

Since 2010, Congress has cut the IRS’ budget by nearly $1 billion and the agency has lost more than...

Members of the Senate Finance Committee know the clock is ticking for the IRS to make some big changes ahead of next tax filing season. They also realize the agency faces these challenges with a shrinking budget and workforce.

Since 2010, Congress has cut the IRS’ budget by nearly $1 billion and the agency has lost more than 17,000 employees. But under the new tax reform law, the agency also has to update more than 140 IT systems and 450 forms in time for the upcoming tax season.

At a committee hearing Thursday, senators got their first chance to gauge the priorities of Charles Rettig, President Donald Trump’s pick for IRS commissioner.

“The modernization of the IRS’ IT systems and bringing the IRS IT systems into the 21st century is one of my top goals,” Rettig said. “It serves two purposes — it serves not only the protection of taxpayer data, which I believe we all agree is a principal concern, but also modernizing the IT system serves to enhance services to what the taxpayers in this country deserve.”

The IRS has some of the oldest IT systems still running in the government. Some date back to the Kennedy administration.

Committee Chairman Orrin Hatch (R-Utah) told Rettig it’s not just the IT systems that are aging — it’s also the people.

“The IRS stands at a crossroads both in terms of challenges and responsibilities,” Hatch said. “At the same time, it has an aging information technology infrastructure and an aging workforce.”

More than a majority of the IRS’ workforce is over the age of 50, and nearing retirement age.

In order to address both of these concerns, the IRS recently put out a five-year modernization roadmap. As part of that plan, acting commissioner Kautter said the agency would hire an additional 1,700 employees.

Kautter has also worked to obtain critical pay authority to recruit for hard-to-fill IT jobs.

“I’m a proponent of critical pay authority for the Internal Revenue Service, particularly with respect to the IT side of the operation,” Rettig said, adding that the agency’s systems defend against 2 million to 3 million cyber attack attempts each day. “If in the absence of critical pay scales, I think that it’s a significant effort on my part and on the part of other senior leadership members of the Internal Revenue Service to encourage not only the workforce that wants to remain there, but to recruit from the outside.”

“It struck me as surprising when I learned that the IRS has so few appointed positions, and so many career positions,” Toomey said. “I just wonder if it wouldn’t be better for the commissioner to be able to assemble his or her own management team to a greater extent.”

Rettig told Toomey he’s open to the idea, but added the career workforce has a wealth of institutional knowledge.

“Career IRS workers are absolutely world-class, but I also believe that having private-sector experience and bringing that inside is critical, so there’s a deep understanding of the impact of each step that the Internal Revenue Service takes on American taxpayers,” he said.

In its five-year plan, the IRS outlines steps to reduce fraudulent tax returns. Since 2015, the agency claims taxpayer-reported cases of identity theft have decreased by 64 percent.

But Sen. Bill Cassidy (R-La.), a victim of identity theft, said he wants the IRS to take greater steps to stop fraudsters.

“The trends look good,” Cassidy said, adding that the number of fraudulent tax returns fell from 1.4 million in 2015 to 600,000 this year. “What thoughts do you have as to how we can move that 600,000 number, which cost us billions of dollars in fraudulent returns, down toward zero?”

Lawmakers have introduced more than a dozen IRS reform bills in recent months. The proposals include designating a single point of contact at the IRS for victims of identity theft to call, notifying taxpayers when the IRS suspects fraud, and making the criminal punishment for identity theft more severe.

Rettig says many of those bill proposals would help strengthen the agency.

But the IRS is also looking to improve its taxpayer services. National Taxpayer Advocate Nina Olson’s latest report to Congress highlights ongoing problems with the agency’s ability to answer tax questions over the phone.

Rettig said the IRS should also reduce long wait times over the phone. He added some state tax agencies are now able to give taxpayers a call back to avoid long holds.

“That’s what the taxpayers are used to. They’re used to calling a private-sector entity and getting a three-minute hold, leave your number, and they’ll call you back. I would like to see the IRS get to that level,” he said.

The IRS’ five-year strategy also looks to narrow the “tax gap,” the difference between the money the IRS collects and what taxpayers actually owe. The agency estimates it collects $500 billion less than it should each year.

If confirmed, Rettig told senators he’ll work to restore trust in the IRS, which he says play a big role in people coming forward to pay their taxes.

If the voluntary compliance rate went up just one percent, he said the IRS would collect an additional $30 billion each year. But the opposite holds true as well.

“If the Internal Revenue Service loses the respect of the American taxpayer, and it reduces 1 percent, that’s a $30 billion loss. I’m extremely hopeful to put a significant dent in the tax gap,” Rettig said. 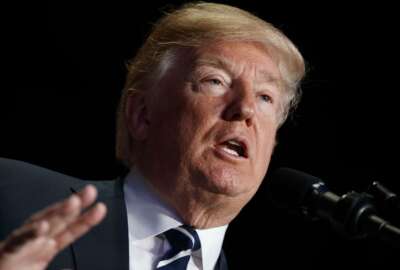