By all accounts, the U.S. Postal Service has a flawed business model that needs fixing.

Postmaster General Megan Brennan has said as much after a number of quarterly financial calls. And so has President Donald Trump, in a number of tweets.

The postal task force stood up by the White House in April is expected to send...

By all accounts, the U.S. Postal Service has a flawed business model that needs fixing.

Postmaster General Megan Brennan has said as much after a number of quarterly financial calls. And so has President Donald Trump, in a number of tweets.

The postal task force stood up by the White House in April is expected to send its recommendations to the president by August.

Lawmakers have proposed several postal reform bills but they have not passed major legislation on the issue in more than a decade.

Last month, USPS posted a $1.3 billion loss for the second quarter of fiscal 2018 — more than double the loss it reported for the same period last year.

For years, the Postal Service’s business model has been on the Government Accountability Office’s list of high-risk programs. Speaking Friday at a Lexington Institute forum on postal reform, Lori Rectanus, the director of physical infrastructure issues at GAO, said stakeholders still cannot agree on a way forward for the postal service.

“We cannot agree on whether postal services are a fundamental right that everyone should get equally and fairly, or are they a service that should be left to the markets,” Rectanus said. “Do we want to treat them like we’ve treated other utilities — electricity, water, telecoms — or do we feel like they are a guaranteed government service?  Depending on how you feel about that, that plays into what is part of the problem as well as the solution.”

‘Worst of both worlds’

“Ironically, I think this dichotomy was set up to make the Postal Service kind of have the best of both worlds, and I think what we’re seeing is it sort of has the worst of both worlds,” she said. “On the one hand, it’s treating its workers like they’re federal workers, with the kind of benefits that federal folks might get. But then it’s being paid for by the private-sector, by mailers.”

First-class mail, one of the Postal Service’s most profitable products, and marketing mail revenue fell by $181 million in the second quarter.

For more than a decade, USPS has had to prefund retiree health benefits, which it said is burdensome. By the end of fiscal 2017, the Postal Service owed the fund more than $38 billion.

“The primary source of the current Postal Service’s financial challenges is not the decline of letter mail,” Dimondstein said. “Rather, it is the red ink almost entirely derived from the bipartisan congressional enactment of the 2006 Postal Accountability and Enhancement Act.”

Most of the recent reform bills proposed in House and Senate would require postal retirees to enroll in Medicare parts A, B and D.

But John Hatton, the deputy legislative director for the National Active and Retired Federal Employees Association, said his organization does not support these proposals.

“As employees of the Postal Service, they earned a valuable pension and retiree health benefits, in addition to their pay, in exchange for years of hard work,” Hatton said. “They rightfully expect the U.S. government to live up to its end of the bargain. Unfortunately, the leading House postal bill and the similar Senate version would unilaterally change the terms of that bargain.”

Another big question, going forward, is what business the Postal Service wants to be in. Sens. Bernie Sanders (I-Vt.) and Kirsten Gillibrand (D-N.Y.) have introduced legislation that would allow post offices to work like banks or check-cashing businesses.

But other experts say the Postal Service should stick to what they know how to do: delivering mail and packages while cutting costs.

“Some people want a healthy USPS. You hear words like ‘robust’ and ‘thriving’ and ‘financially stable,'” she said. “Those are the folks that say, ‘If a postal carrier is doing down that road six days a week anyway — maybe seven — and if the mail volume is going down, then we need to come up with other things to really maximize that infrastructure. What else can we have these folks do? But then you have people that say, ‘No, the definition of success is a healthy postal ecosystem where we are nationally competitive and globally responsive to what the global needs across this whole postal ecosystem.'”

The Postal Service has called on the Postal Regulatory Commision to allow it to raise its stamp prices beyond the rate of inflation. That would be the biggest change in postal prices in nearly 50 years. The statutory price cap applies to USPS’ market-dominant mail products, which generate roughly 70 percent of its total revenue.

But the PRC and Congress are expected to wait and see what the postal task force says before moving forward on any changes. It is expected to release a report to the president by Aug 10.

Paul Steidler is a senior fellow at the Lexington Institute. While the Postal Service sees the volume of its most profitable mail products going down, the 2010 census found that more than 10 percent of Americans don’t have internet service at home. Because of that, Steidler said the Postal Service should not give up on snail mail just yet.

“The mail business that is done is often treated with disdain,” he said. “Even the Postal Service will say, ‘Volumes are going down in mail, but we just have to race off to doing work on packages and that will be our salvation.’ But the reality is, the mail is huge.”

“As we have repeatedly stressed, these business model problems are serious, but solvable, and the president’s executive order establishing the Task Force on the United States Postal System provides an opportunity to further consider these important public policy issues,” USPS said in a statement. 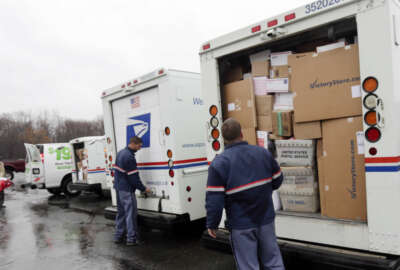