The IRS makes the cost of decade-long workforce and budget cuts clear in terms of its taxpayer service – fewer employees to answer phone calls and IT staff working around the clock to reprogram systems.

The agency, with 33,000 fewer employees than what it had in 2010, is spread thin in all directions and pushed to its limits to roll out new benefits Congress dropped in the middle of the filing season.

The IRS makes the cost of decade-long workforce and budget cuts clear in terms of its taxpayer service – fewer employees to answer phone calls and IT staff working around the clock to reprogram systems.

The agency, with 33,000 fewer employees than what it had in 2010, is spread thin in all directions and pushed to its limits to roll out new benefits Congress dropped in the middle of the filing season.

But those cuts now translate into a greater share of tax revenue being left on the table. IRS Commissioner Chuck Rettig said cuts to the agency’s enforcement operations mean the tax gap between what taxpayers owe and what the agency collects is likely to reach $1 trillion annually — more than double the previous estimate.

“It would not be outlandish to believe that the actual tax gap could approach, and possibly exceed, $1 trillion per year,” Rettig told members of the Senate Finance Committee on Tuesday.

The top 1% of taxpayers, according to research from IRS personnel, account for $175 billion of the tax gap.

While the IRS won’t officially release its updated tax gap estimate until next year, the figure has more than doubled the $441 billion annual estimate the agency calculated for tax years 2011-2013.

Rettig said the IRS, based on historical trends, could realistically collect up to 20% of these taxes with the right resources, and could probably do better than that, if Congress gives the agency the resources needed to pull off the full scope of its six-year modernization effort.

“The IRS absolutely needs more resources across all lanes of the Internal Revenue Service. And, you know, we do get outgunned,” Rettig said. “I mean, there’s no other way to say it. I’m confident and I can assure you we’re using our resources to the absolute best of our ability. It is not a dedication or a people issue, it’s a numbers issue,” Rettig said.

While IRS workforce cuts have been felt all across the agency, Rettig says the agency has 17,000 fewer enforcement personnel than it did a decade ago. But even if the agency received a significantly higher budget in 2022, Rettig said it would take years for the IRS to fully train new enforcement employees.

“It will take time for the IRS to overcome the challenges of the past decade and the agency will continue to struggle to replace workers lost through attrition and to expand our workforce and support implementation of our multi-year integrated business modernization plan as designed,” Rettig said.

Rettig said the IRS has about 6,500 frontline revenue agents who handle the most complex, sophisticated individual and corporate tax issues.

President Joe Biden’s fiscal 2022 budget request would increase IRS’s budget by more than 10%. Most of the additional IRS funding would go toward customer service improvements, as well as a multi-year initiative to improve tax compliance and oversight.

Committee Chairman Ron Wyden (D-Ore.) said the increase was a “good start” for rehabilitating the IRS and giving it more resources to go after tax cheats.

If the IRS had an extra $1 billion to spend on enforcement, Rettig said the agency could bring on as many as 4,875 new frontline enforcement personnel, as well as staff up the Taxpayer Advocate Service and other related services.

Call volumes have more than doubled, compared to previous years. Rettig said the agency has received a peak of 1,500 calls a second. The IRS website, meanwhile, has logged 1.1 billion visits.

The IRS has received more than 93 million tax returns, and issued more than 62 million refunds worth $180 billion.

Rettig said the agency still has a backlog of 1.7 million tax returns from last year’s filing season, but said the agency is “current” on its inventory of mail it needs to open.

Rettig said the agency is “all hands on deck” with processing, and has implemented mandatory overtime and weekend work to clear the backlog. With these extraordinary measures in place, he said the backlog of tax returns will take until this summer to process.

The ability of employees to work above and beyond, however, doesn’t undercut the agency’s need to replace some of the oldest legacy IT systems in government. Rettig said the agency needs “consistent, adequate multi-year funding” to meet the goals of its IT modernization plan.

In addition to juggling the filing season and sending out a third wave of Economic Impact Payments, Rettig said the agency is doing everything it can to create an online portal as part of expanded child tax credits in the American Rescue Plan. The provision, as stated by lawmakers, will translate into $300 monthly payments per child for eligible households.

Rettig said the program will cost the IRS $391 million to implement and requires significant effort for a tax enforcement agency to become more of a public-facing benefits provider.

“We were asked to create an entirely new structure for the Internal Revenue Service. We are not historically a benefits delivery federal agency, but we’re setting that up,” Rettig said.

While the pandemic spending bill requires the IRS to get the payments out the door by July 1, and set up an online portal, Rettig said the agency won’t launch the system until it’s ready and able to mitigate improper payments.

Rettig said the IRS worked closely with lawmakers to meet the July 1 deadline it helped set in the legislation, which gives the agency breathing room to handle its other obligations. Still, meeting the deadline remains a challenge.

“It would have been extremely difficult for the IRS to launch a CTC program at any time before July 1. It’s a challenge to do it July 1,” Rettig said. 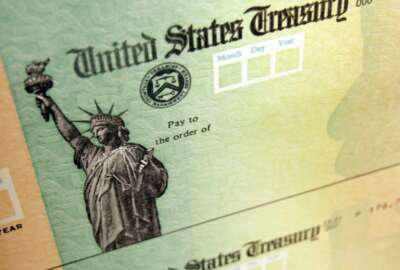