The Air Force is making moves to better the quality of life of its airmen through a series of new initiatives starting this fall and winter.

As part of an effort to attract talent as the service expands to 317,000, the Air Force is experimenting with the way it assigns airmen to positions and the physical requirements they must follow.

Lt. Gen. Gina Grosso, Air Force deputy chief of staff for Manpower, Personnel and Services, said as part of that effort the service will start a pilot program this December that will allow airmen to define themselves professionally when applying for assignments, so they can be better matched with positions.

That means airmen will be able to pick and choose what information about themselves will be presented to the Air Force hiring authority.

“The best way to get a job is on LinkedIn. This idea that somebody has a need, they are looking for a certain set of skills and they go out to some web-based system and they find a person that matches that skillset,” Grosso said Oct. 13 at an Air Force Association event in Arlington, Virginia. “On the other side the individual defines themselves … and then you hire someone in two weeks.”

Grosso said the Air Force won’t be as efficient as that, but it needs to do a better job of matching an individual’s attributes and experiences with the desires of a commander and his open positions.

The Air Force doesn’t want to take the hiring process all the way down to the commander-level, but it does want to play matchmaker with the airmen and jobs in the service.

“How do we get a better win-win with the individual and the system and take in more qualitative data … It may look like LinkedIn, but it may not,” Grosso said.

The Air Force will compare the pilot results to the traditional hiring system.

While the Air Force is pondering primary jobs, it’s also trying to cut back on extra responsibilities airmen have to do.

Grosso told reporters after her speech a new tranche of training requirements will be taken off the shoulders of airmen.

That announcement should come within the next two to four weeks.

The Air Force already cut back on the duties airmen have to perform in August. This tranche will lessen some of the training airmen must go through.

Grosso added that some airmen were skeptical of the cut in duties because it’s not the Air Force’s first attempt.

In order to attract the kind of talent Grosso said the Air Force will need in the 21st century, the service is doing some introspection on what that airman will look like.

It may be different than the chiseled, clean-cut military man that comes to mind for most people. Grosso’s office will give some recommendations to the Air Force chief of staff in December.

“We are looking at, honestly, much more liberal policies,” Grosso said.

That includes a possible exception for cyber warriors.

“One of the things that I’m thinking about that is really in the nascent stages, is if you think about warfare in the future … and this interface between man and machine. How much brawn does the military need and how much intellect? I just think about a cyber warrior, now do I care what a cyber warrior weighs? Do I care that they run a mile and a half in 12 minutes? It gets to this idea of rather than having a standard for the whole force, do we think about individual standards? Which frankly scares a lot of people. We are a force that values uniformity,” Grosso said.

The Air Force is also reconsidering its tattoo and uniform standards as well. 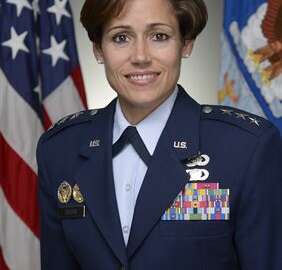