Starting tomorrow the Air Force will halt new repair and recovery operations at Tyndall Air Force Base, Florida, in order to save 2019 funds for other critical areas, unless it can get supplemental funding from Congress.

That doesn’t mean the service is giving up on the base, however. The Air Force plans to fully clean up Tyndall and rebuild it as a fighter base, but it’s calling on Congress to be its insurance policy.

Starting tomorrow the Air Force will halt new repair and recovery operations at Tyndall Air Force Base, Florida, in order to save 2019 funds for other critical areas, unless it can get supplemental funding from Congress.

That doesn’t mean the service is giving up on the base, however. The Air Force plans to fully clean up Tyndall and rebuild it as a fighter base, but it’s calling on Congress to be its insurance policy.

The Air Force rerouted $400 million in 2019 to repair and recover Tyndall, but it can no longer continue to divert funds to the base for cleanup, said John Henderson, Air Force assistant secretary for installations, environment and energy

Henderson told reporters at the Pentagon Tuesday that the service will withhold funds for the start of 121 projects at Tyndall until 2020. Those projects include cleaning up downed trees, remediating mold issues, repairing roofs, and demolishing damaged buildings.

“These were actions we were trying to avoid, but unfortunately is now a necessity,” Henderson said.

He added that repair and recovery projects at Offutt Air Force Base, Nebraska, will likely meet the same fate sometime in June.

Offutt was hit with extreme flooding earlier this year.

The Air Force already deferred 61 “critical infrastructure projects” across 18 states and five overseas locations worth $272.4 million for Tyndall and Offutt.

To finish the job of simply cleaning and recovering at Tyndall, the Air Force will need another $350 million in 2019 alone.

Additionally, Tyndall will need $750 million in 2019 for operations and maintenance and another $150 million in military construction funds for design efforts to rebuild the base.

“This leaves about $2.5 billion in military construction requirements and another $900 million in operations and maintenance at Tyndall Air Force Base to fully recover,” Henderson said.

He added Offutt Air Force base will need about $120 million for facility maintenance and repair in 2019 and, at some point, about $300 million for military construction to rebuild buildings that were destroyed.

All said and done, the Air Force needs about $1.2 billion this year and another $3.7 billion over the next two years to clean up and rebuild the two bases.

As more extreme weather is damaging military bases, Congress is beginning to wonder if it’s worth paying for installations that are in the way of sea level rise, desertification, natural disasters and drought.

Henderson said Tyndall is critical to the Air Force because of its vicinity to the water.

“It’s one of the few bases where we have almost no encroachment, just because of its geographic location,” Henderson said. “They will likely never have an encroachment problem.”

Also, Tyndall’s proximity to the water is convenient because as soon as planes takeoff they are over range and training space.

“That ability for us to fly unmanned drones out of Tyndall and into Eglin Testing and Training Area doesn’t exist anywhere in the United States,” Henderson said. “That airspace is extremely difficult to get from the Federal Aviation Administration because flying unmanned full-sized drones is inherently dangerous.”

Henderson also said Tyndall’s proximity to ranges and other bases allows instructors to train 50% of the F-22 syllabus without leaving the airspace.

While it may be a valuable base, Congress will likely not appropriate funds to something that will easily be destroyed again.

Henderson said the master plan for rebuilding the base will bake in more resiliency against extreme weather.

Tyndall will be rebuilt to withstand higher wind speeds and on a higher storm surge line.

The Air Force also performed a detailed report on the disaster at Tyndall and what can be done to mitigate the issues. The report looks at better weather prediction, how the Air Force can operate better in a storm and how it can manage aircraft better.

“The newer facilities usually fared a little better,” Henderson said. “And then there are a number of things we are going to go back and relook at that go after us being more resilient in general. Those are things like building at a higher standard and elevation for the area or changing the building envelope.”

As for Offutt, the Air Force will rebuild at higher elevations and encourage the local area to upgrade its levee. 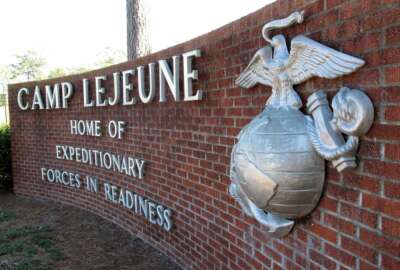 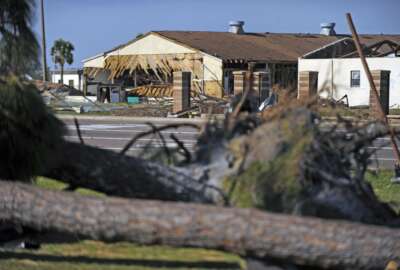