Phaedra Chrousos is the first Chief Customer Officer at the General Services Administration. I sat down with her recently for a wide-ranging conversation about her portfolio, including 18F.

On becoming the first chief customer officer at GSA: “My first responsibility was to understand what was broken here. Many people warned me that it could be culture; that’s the classic thing that people say about government. I found that it was exactly the opposite. [There is] a very customer-centric workforce at GSA that really cares about the customer, but lacked information about the customer. They weren’t empowered to make data-driven decisions around the customer on a daily basis.”

On embedding a customer service culture into the agency before the end of the Obama administration: “I want to be able to create the processes to get the information from the customer into the GSA team’s hands permanent. I want to make that a continuous feedback loop and an open feedback look. We’re trying various ways to do that including, for example, putting our buildings up on Yelp, so that it’s a continuous open loop for tenants. At the end of the day, and even in the private sector, the best chief customer officers leave because they’re no longer needed if they did their job right.

“Five to 10 years down the road, I hope GSA doesn’t need a chief customer officer. I hope my position disappears, because we’ve created the feedback loops and they’re permanent, and people know how to take the information and do something great with them, and that really drives both the products we offer and the services we offer, as well as the type of support we give.

“I hope that one of us has the good sense at some point to say, ‘Ok, this is done, we did it. Our scores are up, we’re producing products that are widely adopted, which means we’re listening to the customer’s needs when we create products, and we have a really robust feedback loop and an engaged employee base that knows what to do with that data.'”

On what she would take back to the private sector should she leave government: “I think I underestimated the value of data in people’s hands. I assumed that people are talking to their customers, because I came from the startup world and from a small and then medium startup company. We talked to our customers all the time and it was live or die. If we didn’t talk to our customers we’d be eaten by a competitor in no time. I have a really great appreciation for how [in] big organizations that data can get lost and that loop can get hazy, so I’m really happy to have had the experience with such a large organization and figuring out how to do this on scale.”

On new standards for government websites: “This is one of my favorite projects and it just launched … the governmentwide Web standards are open-source Web standards that are up on GitHub where citizens can provide feedback that anyone in the federal government (and state and local [governments]) can use. They don’t need to go get an expensive design contract, they can just use these. The added advantage of using these is that other agencies are also using them, which means that will create a more consistent customer experience and a more user-friendly one across a very federated federal government. [T]hat’s a huge advantage to this, and the fact that there’s an open feedback loop and people are continually improving it is just an added bonus.

“The benefits are fairly obvious to those that are familiar with building digital services, so they’ve already been used three times, believe it or not, in their very early office stage. One of the websites that you may know more than others is the College Scorecard. Department of Education used them. The White House also used them, along with the Presidential Innovation Fellowship program to produce vote.usa.gov. They’ve been used already, which is wonderful.

“We’re not going to necessarily promote them [the Web standards]. The government is pretty bad at promoting things, internal services, in my opinion, but we have an informal handshake with the United States Digital Service and the Digital Service teams that are popping up at every agency that they should use this first. We’ve all committed to that, and I think that’ll make a dramatic change in five to 10 years as we’re redoing websites in the federal government.

“We’re in a very unique point in the government’s history when it comes to digital services, because right now we’re seeding teams across the government that are digital services specialists and that’s the ecosystem that I just spoke about. Plus we’ve got a team at the White House, USDS, and we have the larger team at GSA, 18F, and these folks are refreshing websites all across the government, and I hope that if they commit to using this, then in five to 10 years, we should have covered a decent majority.”

On promoting a customer-focused Web culture in the federal government: “This digital service movement, bringing people in from the private sector, empowering people in government that have these skills to set at the management table, doing these things has shifted the mindset from Internet 1.0 to Internet 2.0, which is more transactional. It also is much harder than 1.0, because it means taking paperbased processes online, it means changing the underlying plumbing and technology behind websites, so it’s a much longer and more arduous process, but I think we’ve got the right people in government and the right people at the leadership table now to push this forward.”

On building a long-term digital vision for the government: “I love to quote (former federal Chief Technology Officer) Todd Park as my favorite quote, which is, ‘Think of government as an industry that needs to be disrupted.’ I don’t want to focus on the word ‘disrupted,’ I want to focus on the word ‘industry.’ Because we’re a federated government, it’s not like we can go to one place and just turn the key and say, ‘Now, everything’s different.’ Like any industry that you disrupt, you have to go at it from different angles. I see USDS going at it from a firefighting angle. I see 18F going at it from a builder’s angle. I see the Presidential Innovation Fellows as entrepreneurs in residence.”

“I think the angle that I’m most interested in and most passionate about is the one I think that still needs the most work. That’s how do we engage the private sector in a way that’s really helpful to the government. How do we create a really secure bridge between the private sector and the government for innovative private sector companies that we may not always have access to. That means how do we streamline Schedule 70. How do we repurpose and streamline FedRAMP? How do we make sure that these companies have marketplaces like the Agile BPA, where they can be marketed to government and people can access them in a curated way? I’m really passionate about that and I think we’ll see a lot of movement in that from GSA and from 18F specifically, [and from] the Office of Citizen Services and Innovative Technology that has FedRAMP over the next year. So I’m very excited. I think that’s the final piece to the puzzle to moving the government forward when it comes to digital services, and I think it’s one of the most powerful pieces because it’s really a scalable piece.”

On helping other agencies stand up digital services teams: “They are some of our primary customers and probably some of the CIO shops and the digital services teams within them are our most sophisticated customers, so they know exactly what they need. They’ve gone and they’ve assessed the problem. Usually they’re small enough to assess the problem and to chart a path forward and nimble enough, but they’re not so big that they can take on all the work themselves. Every time a digital service team stands up we actually see a tremendous increase in work come in to 18F.”

On 18F founder Greg Godbout moving to EPA to lead their digital services team: “Greg’s in a wonderful job there. He still advises 18F and I still rely on his advice for 18F. He’s a wonderful founder and he’s done a great job with EPA building his own team and working within the CIO shop, and that should be a great example for other agencies. Department of Education has also done a wonderful job, VA’s done a wonderful job. There’s an emerging team at DoD called Bunker 75 that’s coming up. It’s happening across government and we’re excited to see it happen, and we’re excited to all work together and keep in touch to make sure that we serve them as our customers, but we also create this ecosystem where we understand the needs and listen to them as our customer.” 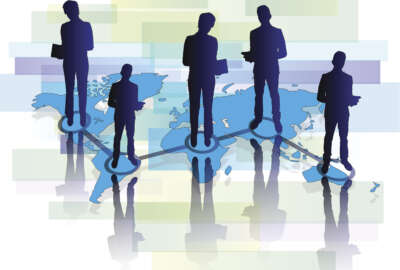