The Army Secretary wants the service to temporarily stop transferring its medical facilities to the Defense Health Agency, and is asking Congress to allow the Army to keep its public health and research arms.

In an internal Army memo, obtained by Federal News Network, Army Secretary Ryan McCarthy states he is “concerned about the lack of performance...

The Army Secretary wants the service to temporarily stop transferring its medical facilities to the Defense Health Agency, and is asking Congress to allow the Army to keep its public health and research arms.

In an internal Army memo, obtained by Federal News Network, Army Secretary Ryan McCarthy states he is “concerned about the lack of performance and planning of both the Defense Health Agency (DHA) and Defense Department Health Affairs with respect to the military treatment facilities (MTFs) transition.”

McCarthy wants to halt the transition until a detailed budget strategy and plan to transfer functions from the services is delivered.

Federal News Network requested comment from the Defense Health Agency but did not receive an immediate response.

The military services were mandated by Congress in 2017 to transfer their health facilities to DHA over four years. Half of service-run MTFs in the United States are already in DHA hands. However, McCarthy’s Dec. 20, 2019 memo states DHA “failed to provide a clear plan forward with respect to policy and budget.”

“Like all mergers it’s about pacing,” McCarthy told reporters Wednesday at a Defense Writers Group event in Washington. “You are bringing thousands of people and functions to one organization. Like all mergers and acquisitions there are cultural dynamics, there are synergies you try to achieve and if you do it too fast you’re going to make a mess. This is the healthcare of our soldiers and their families.”

McCarthy brought up challenges with Walter Reed Hospital during its consolidation.

“You were merging Walter Reed with Bethesda during the height of violence in the Iraq campaign and they made some terrible mistakes that affected the healthcare of wounded personnel,” McCarthy said.

“Our concerns are to ensure we have the marketplace right,” he said. “The plan that’s been put on the table and moving forward is we are going to downsize some MTFs and we may close some MTFs and outsource that to the communities — the market in the immediate area. Our concern is that we need to assure that sufficient market analysis has been done to know that that market can assume those patients.”

The Army memo has an attached template for how medical funds will be spent in each market.

McPherson likened the healthcare issue to the current problems with privatized housing on military bases.

“Our concern is if we outsource that like we outsourced housing 20 years ago, that 20 years from now individuals who are in these seats will be facing a medical crisis as we are facing a housing crisis today. That’s the red flare we’ve sent up,” McPherson said.

Congress is not convinced of the Army’s apprehension.

The 2020 defense authorization act report states lawmakers are aware of the concerns, but do not want to change the law.

“The conferees see no reason to change direction,” lawmakers wrote in the report. “The conferees expect the secretary of defense to fully implement the law and to accomplish these critically important reforms expeditiously.”

McCarthy’s memo also states the service would like to repeal the current law transferring the Army Public Health and Army Medical Research and Materiel Command [MRMC] to DHA.

“Until DHA can demonstrate they can manage our hospitals, I have serious concerns about their ability to lead out public health, research and development and operational logistics assets,” the Army said in the memo.

Attached to the memo is a legislative proposal giving the organizations back to the Army.

“Moving [MRMC] from Army management to agency management will specifically produce inefficiencies for the Army that are contrary to best practices described by the Government Accountability Office and others,” the Army states in the memo. “As conditions during war may change rapidly, medical research and development is essential to respond quickly and effectively to support warfighter capabilities and survivability.”

The law states that by Sept. 30, 2022, DHA will establish a leader for Defense Health Agency Research and Development, which will be comprised of MRMC and other medical research organizations and activities in the armed forces.

The Army argues that the transfer of Army Public Health reduces agility to respond to public health threats in a timely manner and may increase costs and organizational friction, increasing the risk to Army warfighting capabilities.

In 2018, when he was serving as Army secretary, now Defense Secretary Mark Esper said he was troubled that the service needed to give up MRMC.

“My concern with that provision is it might not enable us to do what we need to do with readiness on the battlefield and training,” Esper said. “My preference would be to keep that, the medical research, because I want to be thinking about what I need on the future battlefield. It’s a readiness issue for me.” 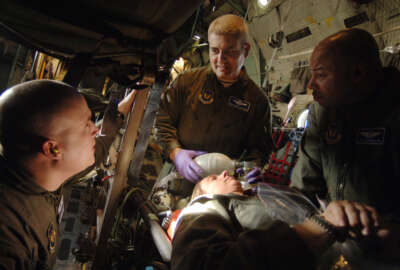 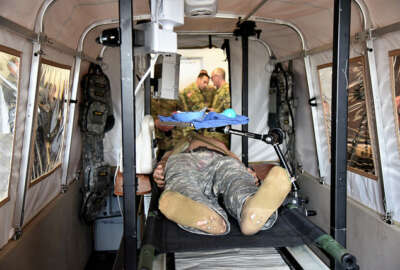 Army not excited about possibility of amputating medical research arm