Automation won’t put federal employees out of a job anytime soon, but the spread of robotic process automation (RPA) in agencies will likely have an impact on the types of government jobs that are available within the next decade or so, the General Services Administration’s leading voice on RPA said Wednesday.

“We shouldn’t be hiring for positions that can be automated. That becomes a dead-end job,” Burrows said at an ACT-IAC conference in Washington. “We should think about automation first.”

Agencies have found success using RPA to tackle repetitive, menial tasks, like copying and pasting text into forms, but Burrows said it’s unclear what tasks lower-grade employees will do when an algorithm can do aspects of their jobs more quickly and efficiently.

“What we’re finding so far is many of the jobs are being done by mid-level employees, and so it’s actually very easy to move them to more valuable work. They immediately know what they can do with their time,” Burrows said.  “We have another group of people who are lower-skilled, lower grade level — that’s a more challenging situation.”

GSA, the IRS and State Department have experimented with RPA pilots to free up labor hours, but actual cost savings have been less apparent.

“You don’t get cost savings immediately because the people aren’t leaving,” Burrows said. “But if you look over the next 10-15 years, there’s a wave of retirements coming.”

As a result, Burrows said agencies won’t fully invest in RPA tools until the government hits a couple “home runs” with the technology. One case study he identified would free up as much as 7,000 labor hours per month.

“With processes like that, your [return on investment] just shoots up. I think then we’ll see it more. But it’s too new, we don’t see a big commitment of investment as agencies are exploring it,” Burrows said.

While some agency job series may change over the course of the next 10 years, automation may also make it easier to attract the next generation of talent with in-demand technology skills.

For example, Burrows said an agency job description today — in which an employee performs 100 hours a month of “menial tasks” — someday might become a job where an employee builds and manages a suite of bots, and monitors their performance.

“That’s a much more appealing type of job for a young person, so there are a lot of long-term benefits to the government,” he said.

GSA has 10 bots operating at this point, and has been rolling new bots out at a rate of about one per month since February 2018.

Looking ahead, Burrows said GSA is thinking about how to increase capacity. The agency has trained about a dozen people in the CFO’s office to develop bots.

“We’re considering should we have a small central team of full-time people? Should we allow part-time people? I’m finding it’s not easy to scale up,” he said. “I hear in the private sector companies that have thousands of bots running. To be honest, I can’t imagine. I mean, what kind of development capacity do they have? How many people would you need, and what kind of monthly rate of deployment of bots would you have to have?” 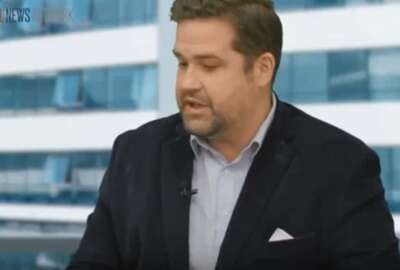