Less than a month into his new role, Secretary of State Mike Pompeo is walking back concerns that the Trump administration would again seek to cut the agency’s budget by nearly 30 percent.

Pompeo testified before members of the Senate Foreign Relations Committee just a week after he lifted the State Department’s hiring freeze.

President Donald Trump’s fiscal 2019 budget proposes slashing the agency’s budget by about 30 percent. It proposed similar cuts in its...

Less than a month into his new role, Secretary of State Mike Pompeo is walking back concerns that the Trump administration would again seek to cut the agency’s budget by nearly 30 percent.

Pompeo testified before members of the Senate Foreign Relations Committee just a week after he lifted the State Department’s hiring freeze.

President Donald Trump’s fiscal 2019 budget proposes slashing the agency’s budget by about 30 percent. It proposed similar cuts in its FY 2018 budget, but Congress ultimately ignored those cuts in the omnibus spending deal it reached in March.

Pompeo assured senators that the State Department will continue to have the resources it needs to carry out its mission.

“I’m going to try and make sure we have every dollar we need to deliver,” Pompeo said Thursday.

Sen. Bob Menendez (D-N.J.), the committee’s ranking member, applauded Pompeo for lifting the agency’s hiring freeze, but cautioned that the new secretary still has a long way to go before filling some of the top ranks of the department.

“You have inherited a department with a prevailing sense of plummeting morale, a core hollowed out of senior career diplomats whose expertise cannot be replaced overnight,” Menendez said.

According to the Partnership for Public Service’s political appointee tracker, the Trump administration has 30 nominees for State Department positions that haven’t yet been confirmed by the Senate.

One of the highest pending nominations, Eric Ueland, who’s tapped to be undersecretary for management, got a favorable report from the Senate Foreign Relations Committee, but has yet to receive action from the full Senate.

“There are still big gaps at the assistant secretary level, at the undersecretary level. Where there were nominees, we’re pushing to make sure they move quickly, and where there weren’t, we’re working to develop nominees that come across so that we can, in fact, engage all over the world,” Pompeo said.

In some cases, Menendez said some bureaus within the agency still aren’t hiring.

Pompeo said that additional guidance still needs to be issued, but assured Menendez that the freeze has been completely lifted.

“We need career professionals, working, leading parts of that organization,” Pompeo said. “It’s going to take me a bit to get where we need to be, so a little forbearance. But know that we’re working hard at it. I want — I’d like to put that in the context of what I think is an incredible priority.”

For members of Foreign Service, which comprised about 40 percent of the State Department’s workforce, the end of the hiring freeze also means the agency will continue to accept Family Member Appointments (FMA).

“It is now the case that where there are demand signals we need additional talent, the State Department employees are empowered to bring those additional team members on board,” Pompeo said.

Before Pompeo lifted the hiring freeze on May 15, it had been in effect for more than a year — well beyond the governmentwide hiring freeze the Office of Management and Budget put in place at the beginning of the Trump administration.

The following day, Pompeo held a town hall for State employees in which he called for a need to bring the agency’s “swagger” back.

“I do urge you to work on ensuring that we’ve got the best morale possible in our diplomacy and our diplomats around the world, and on the responsibilities of the State Department,” Isakson said.

Portman said hiring expert career employees from within the senior ranks of the Foreign Service — not just contractors — is the right way to staff the GEC.

Corker: Budget talks not ‘productive use of our time’

“I am frustrated that the administration ignored the bipartisan, bicameral will of Congress, and submitted again a budget request that would cut by 30 percent much of the State Department and USAID activity that — that I think would weaken our global standing and reverse bipartisan progress,” Sen. Chris Coons (D-Del.)  said.

In his opening remarks, committee chairman Bob Corker (R-Tenn.) said discussing the dead-on-arrival budget proposal was “not a productive use of our time today, in all likelihood.”

“Budgets coming from the administration these days, and for many years, are not really focused on that much, as you know,” Corker said. And there’s a process we go through here to really determine what expenditures are going to be made.”

Pompeo, for his part, reiterated his stance that the State Department will have the resources it’ll need without any belt-tightening.

“We don’t think there are funding shortfalls that prevent us in the near-term from doing the things we need to do, so we think we’re OK there,” he said. 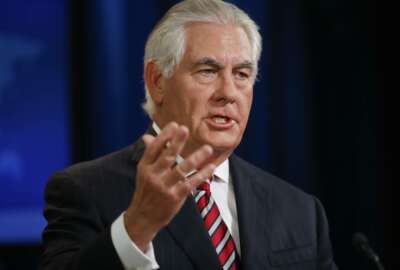