Congress working ’til the bitter end of the year

Congress in the last few weeks may have sounded like a broken record, but the calendar will soon knock the needle somewhere. With what to expect in the waning days of the 116th Congress, we turn to federal news Capitol Hill correspondent Mitchell Miller.

Tom Temin: And Mitchell, it looks like in the stimulus package...

Congress in the last few weeks may have sounded like a broken record, but the calendar will soon knock the needle somewhere. With what to expect in the waning days of the 116th Congress, we turn to federal news Capitol Hill correspondent Mitchell Miller.

Mitchell Miller: Well, that’s the big issue, right, because state and local government funding has been a huge issue for Democrats particularly. And of course, on the other side for the Republicans, it has been protecting businesses and other organizations against legal liabilities in case they’re sued for the coronavirus. So that is an issue. While it has been put aside for the moment, it is certain to come back at some point in the coming year. And a lot of lawmakers really on both sides of the aisle are concerned that it’s going to gum things up again, when we move into 2021. Many Democrats in particular are concerned because they believe it will slow down efforts by the Biden administration to try to get another stimulus package going. And one of the problems right now for Democrats is that many Republicans are now being more vocal about the fact that they don’t necessarily think that there is an inevitability to another stimulus package early next year. With all the going back and forth over this latest package, there’s been a lot of hemming and hawing about what is going to actually take place after Joe Biden becomes the president. And it looks like there’s going to be a lot of pushing back now by Republicans, or at least waiting to see how the economy is doing and where we are with the vaccine, and all the rest as we move into the next year.

Tom Temin: Because we did have that 900,000-person unemployment filing for November. December numbers and January numbers might have a lot of effect on what they do.

Mitchell Miller: Right. And even in this latest package, they’ve had to carve back a little bit of the enhanced unemployment benefits. They initially wanted to take it longer into the next year. But now they paired it back a little bit. But still people are going to be getting extra money for unemployment that will help in connection with the issue that you just talked about. By the way, I also talked to Sen. Mark Warner, who was heavily involved in these talks as well as his fellow Virginia Sen. Tim Kaine, about why do we always bang up against this in December? And of course, we know a lot of the the familiarity of – us here in D.C. know about this – but one of the things that Tim Kaine has pointed out and many others have pointed out over the years is really he thinks it’s time for a change in the fiscal year that it should just not start on October 1. And all the reasons are familiar as we know that once you get into November, in a year of where it’s a presidential election, as we had with this year, everything just gets gummed up because of the politics that are already inherent in the situation. And frankly, campaigning, people are out on the road, generally, although this was different, obviously, with the pandemic, but still, their attention is elsewhere. It’s not on appropriations. So he’s really concerned about that. And then Sen. Warner actually last year proposed what he called the Stop Stupidity Act, which would essentially be a spending measure that kicks in when there is a stalemate so that there would be no threat of a shutdown, that unfortunately for his from his point of view, it has not gone anywhere. One other interesting thing that I asked him about is in connection with this Gang of Eight that they established that basically was the framework for all the COVID relief, he says that he thinks that type of thing is going to happen more and more especially because we don’t know exactly what the balance of power is going to be in the Senate. He said he’s actually had a lot of senators from both sides of the aisle reach out to him and say, hey, the next time you have an issue where you think nothing is moving, we want to be a part of that. So it’s an interesting dynamic as we move forward.

Tom Temin: We’re speaking with WTOP Capitol Hill correspondent Mitchell Miller. And on that issue of where the fiscal year ends, I mean, it’s October, because a quite a number of years ago, they couldn’t get it done by July 1. So they move to Oct. 1 or Sept. 30. So there’s only four quarters in the year so I guess I can go back to April 1 or something, but, somehow I don’t feel like that would cause them to not be able to bunch up at the end.

Mitchell Miller: Right, it gives you the feeling that even if the year were 18 months long, we’d somehow be in the 18th month, right?

Tom Temin: Pretty much. Yeah. And regarding the balance of power, it’s really hard to tell how things will go for the Biden nominees, because we don’t know what’s going to happen in Georgia.

Mitchell Miller: Right. The Senate Democrats are pushing for many of Joe Biden’s candidate nominees to get confirmation hearings right away, so the administration can hit the ground running. Several committees are preparing to do that. But Republicans have also sent out some warning shots. Senate Pro Tem Chuck Grassley, who’s slated to become the Senate Judiciary chair, last week warned that Democrats at times tried to hold up President Trump’s nominees and he’s not feeling especially charitable about giving all of Biden’s nominees the benefit of the doubt. And one of the biggest battles as you know will likely be Neera Tanden to lead the Office of Management and Budget. Many Republicans have made it clear she’ll face a tough confirmation, in part because of her highly critical comments about Republicans while she was the head of the Center for American Progress. And then as you mentioned, there’s Georgia – this could all be very much complicated by the Georgia Senate run off races, which will, of course determine whether Republicans can continue to call the shots as the majority party in the Senate, or if Democrats carve back to 50/50, and then, of course, have the vice presidential vote to get them into power. So it’ll be really interesting to see how that plays out on Jan. 5.

Tom Temin: And meantime, I guess there’s an inauguration to plan and so forth.

Mitchell Miller: Well it still does go through the Inaugural Committee, and they are doing some planning. Republican Sen. Roy Blunt is really leading up that effort. And he basically says that they are going to, as the Biden administration has said, going to have a very, very scaled back inauguration. Now in a normal year, Sen. Blunt points out that they would send out something like 200,000 invitations. Obviously, that is not going to happen. My understanding is it’s only going to be limited to a senator, and then perhaps another guest, and then there will also be a lot of scaling back on the House side. Now, there will actually be at least for now an actual swearing-in ceremony as planned as usually takes place on the west side of the Capitol with Joe Biden and Kamala Harris. And of course, then another issue is whether or not President Trump will even show up at the inauguration, there’s been a lot of indication that he may not do that. As far as how that will affect people around here. As you know, OPM has said that federal workers who telework in the Washington area will get Inauguration Day off as a holiday. OPM identified a “Inauguration Day area,” which includes D.C., Montgomery and Prince George’s counties in Maryland, Arlington and Fairfax counties in Virginia, as well as Alexandria, the city of Fairfax and Falls Church. So for federal federal workers who would normally be going to their jobs, under normal circumstances, they will have the day off. So still a lot of loose ends, though, in connection with the inauguration. You know, will there be a very smaller parade, for example? How many activities beyond the actual inauguration swearing in will take place? A lot of questions still to be answered there.

Tom Temin: This could give a new meaning to the term masked ball.

Tom Temin: And I’m thinking on Jan. 21, then-former President Donald Trump will say “See, I had more people gathered around the mall than he did.” Because luckily with the pandemic might drive people away or keep them away.

Mitchell Miller
I think he would definitely have a point on that one. I don’t think you’re going to have nearly as many people on the Mall this time around

Tom Temin: The schedule for Congress for the rest of the calendar year then looks like what?

Mitchell Miller: The schedule is really just about virtually done. They were supposed to initially try to get out by last Friday, then everything got stretched out a little bit more. So really, this is the end of the lame duck session this week, and then Congress will try not to come back. However, if there is a veto of the National Defense Authorization Act by President Trump, they would have to come back. Lawmakers have said from both sides of the aisle that they expect the House and Senate would override that veto.

Tom Temin: Mitchell Miller is Capitol Hill correspondent for WTOP, thanks so much for joining me.

Tom Temin: We’ll post this interview with FederalNewsNetwork.com/FederalDrive. Hear the Federal Drive on demand. Subscribe at Apple Podcasts or wherever you get your shows. 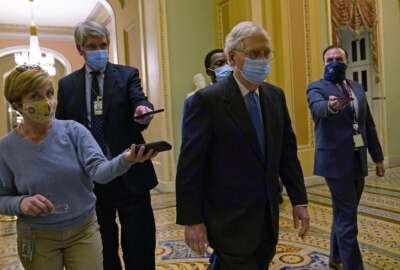 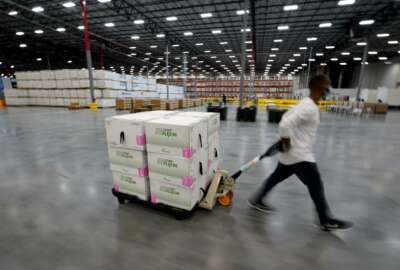