Clearer message needed on what cloud can do for VA

Speaking at the March 30 “Face to Face: Overcoming Barriers to the Cloud” event in Washington, VA Deputy Chief Information Officer for Architecture, Strategy and Design Paul Tibbits said his agency wants to do more with cloud technology. But VA needs a more defined explanation from private industry on what the technology can do for its employees and the veterans they...

Speaking at the March 30 “Face to Face: Overcoming Barriers to the Cloud” event in Washington, VA Deputy Chief Information Officer for Architecture, Strategy and Design Paul Tibbits said his agency wants to do more with cloud technology. But VA needs a more defined explanation from private industry on what the technology can do for its employees and the veterans they serve.

“What customers more likely are gravitating toward, and hopefully we in government are too, is buying the ‘why.’ Why is this thing useful, not what is it or how it operates. Most of your go-to-market strategies dive right in to what the thing is and how it operates, and skips over the why. I would just ask you to think about that when you put your go-to-market strategies together,” Tibbits said. “This all applies to cloud like anything else. If you want to know … what the major impediment to the cloud is, it’s that; not being able to express the value proposition. That’s the major impediment to wise investing in IT anywhere, and it certainly applies to cloud.”

The same goes for use cases, Tibbits said. While VA gets many vendors with great product stories, few of them come with a use case. And of those that do, Tibbits said, an even smaller percentage bring an estimate of improvement in operations.

“If the use cases gave us some indication of how much better patient appointing would become, how much faster claims processing would become, or how much more efficiently we could operate our cemeteries if we did the following four or five things; that would be great,” Tibbits said.

In May 2015, Tibbits brought together stakeholders from across the VA, including the general counsel, the inspector general as well as experts from the Homeland Security Department, the General Services Administration, and research organizations Gartner and Mitre, to discuss how the agency could take advantage of cloud technology.

In 2012, VA awarded a contract for cloud email but ended up cancelling it in mid-2013 after the agency decided its requirements changed.

Information sharing is important to VA, Tibbits said, but the agency has been struggling for decades with how it approaches information interoperability, even with the cloud.

The way it’s been done is working from the bottom up, Tibbits said, which is the wrong way to do it.

“Telling people if two ends of a cable were the same and you could plug it into two boxes you could share information, that’s clearly wrong,” Tibbits said. “But that’s the way we’ve gone about selling information interoperability and continue to scam everybody throughout Washington, D.C., and everybody else saying ‘well that’s information sharing.’ Totally ignoring the semantics; whether the sender and the receiver understood the same thing.”

Tibbits said VA would have been better off starting from the top down.

LaVerne Council, VA chief information officer and assistant secretary for information and technology, stressed in October the importance of “buy first,” something Tibbits also touched on during the cloud conference, which was hosted by Federal Computer Week.

“Buy first,” Tibbits said, means instead of in-house development, an agency looks at something that is already running.

“Ten years ago that would have meant commercial end items and it still does, it could still mean commercial end items,” Tibbits said. “But today in a cloud context, ‘buy first’ still includes cloud. So even if it’s just infrastructure as a service, we’re very interested in taking advantage of that where that makes sense.”

The “buy first” and “make first” strategies each have their supporters, even for the same product or service.

Earlier in March, Council announced a VA pilot program to help veterans self-schedule their medical appointments. At the same time, a Massachusetts congressman is asking for support on a bill that would link the agency with private sector technology to do the same thing. 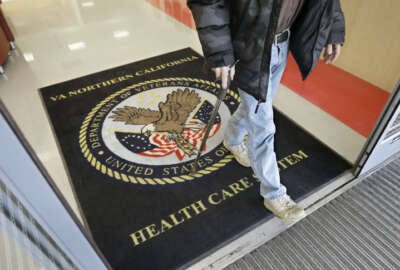 VA reevaluating use of public clouds, new strategy on tap