The federal government is on a fiscally unsustainable track for the future, warns the Comptroller General of the United States, but a good starting place to reverse that course is by improving the way it reports its finances.

The government’s Financial Report doesn’t get nearly as much press as the budget, Comptroller General Gene Dodaro told a Senate budget committee April 6, however, “it’s really needed to provide a total perspective on the government’s financial...

The federal government is on a fiscally unsustainable track for the future, warns the Comptroller General of the United States, but a good starting place to reverse that course is by improving the way it reports its finances.

The government’s Financial Report doesn’t get nearly as much press as the budget, Comptroller General Gene Dodaro told a Senate budget committee April 6, however, “it’s really needed to provide a total perspective on the government’s financial condition and position. It provides insight into accountability over the money that’s been spent already, and the proper stewardship over the assets that the government owns.”

“It would be disastrous for a publicly owned company to be unable to prove to auditors that it had a handle on how much inventory was held in its own warehouses, what condition its property was in or the extent to which it’s on the hook for potential liabilities,” said  Sen. Mike Enzi (R-Wyo.), chairman of the budget committee. “There’s not enough interest in looking at what happens with the money we are already spending. That’s where the audits come in. Every budget should be informed by the knowledge about what happened with the money that already went out the door.”

“There has been some progress in improving financial management of the federal government over the past 20 years, however, significant problems remain,” Dodaro said.

Dodaro said in 2015 the only audits conducted for the Army, Navy and Air Force were for a single year instead of multiple years. Auditors made more than 900 specific findings and recommendations for things that needed to be fixed, but Dodaro said the DoD doesn’t necessarily have all the talent it needs to do that.

Since 1996, GAO has required that all 24 major departments prepare a statement for audit. Last year 21 of them provided statements, Dodaro said. The Department of Housing and Urban Development and the Department of Agriculture did not get clean opinions, but that was due to recent problems and not a reflection on their longer history. The Homeland Security Department was “an outlier for years but for now the last three years had an unmodified opinion, so really when you look at the major departments and agencies, DoD is the one,” Dodaro said.

A request for comment from DoD was not immediately returned.

Sen. David Perdue (R-Ga.) expressed his frustration, saying he was “over this too large to be audited thing.”

“Right now DoD [budget] is somewhere around $600 billion, people say, well, that’s just too large to audit, well, Wal-Mart’s not much smaller than that. Imagine [former President] Mike Duke or any of the other leaders came in to the SEC or IRS and said ‘Boys I’m sorry we’re just too big to be audited, we’ll defer next year.’ I don’t think that’d work very well.”

Other financial reporting problems stem from agencies working with Treasury Department, Dodaro said, “where there are hundreds of billions of dollars of activity among the federal agencies that can’t properly be eliminated. Right now, because of that, there’s a very polite line in the statements: ‘unmatched disbursements and transactions.’ Basically, it’s a plug figure for things that they can’t account for properly to put in to make the statements balance. But it’s not accurate. So that’s a big problem.”

Dodaro also included a graph of publicly held debt to illustrate for the committee how the debt to GDP ratio, which is at 74 percent, is “the highest it’s been since World War II when we had a record 106 percent of debt held by the public.”

“And we’re on a path to exceed those historical numbers by 15-25 years, absent fiscal policy changes,” Dodaro said, adding that the drivers of that debt are demographics and rising health care costs.

Dodaro also said Congress needs to change its approach to setting the debt ceiling so that it’s done closer “to where actual spending decisions are made by the federal government.”

Asked by Sen. Mark Warner (D-Va.) about guidance issued by the Treasury Department and the Office of Management and Budget related to the DATA Act, Dodaro said while data standards have been issued, areas related to reporting, such as where the activity takes place, award descriptions or what exactly was done, need to be addressed.

“Those things need additional guidance otherwise you will get information that will not be helpful,” Dodaro said.

The DATA Act also requires technical standards for information that can be machine-readable and downloadable, but that guidance has also yet to be seen, Dodaro said, adding that he hoped it would be out soon, “otherwise agencies have a legitimate excuse to not be fully prepared to meet the schedule under the DATA Act.”

Sen. Kelly Ayotte (R-N.H.) wanted to know about improper payments, which total about $136 billion, according to the GAO report, and which Dodaro said was linked to Medicaid.

Dodaro said changes are being made in the program but states don’t have the systems in place to verify eligibility.

“The other issue, isn’t it that the right hand often isn’t talking to the left in terms of our ability to share information for eligibility across programs within our own government, isn’t that still lacking?” Ayotte asked.

Dodaro said GAO has requested special legislative authority to access recent wage data within the Department of Health and Human Services’ New Hire database that maintains information for child support enforcement. Programs based on income eligibility could use this information, Dodaro said, but HHS does not believe it has the authority. 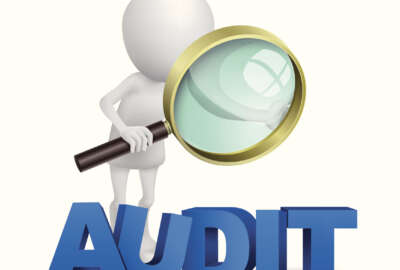