Congress barely avoided a government shutdown on Friday by passing a continuing resolution just hours before the previous CR was set to expire. They cut it close because of demands for concessions by a handful of Senators. But they didn’t buy themselves much time. The latest CR expires — once again — on Friday night. And to...

Congress barely avoided a government shutdown on Friday by passing a continuing resolution just hours before the previous CR was set to expire. They cut it close because of demands for concessions by a handful of Senators. But they didn’t buy themselves much time. The latest CR expires — once again — on Friday night. And to complicate things further, the next spending package aims to incorporate another round of pandemic relief. Loren Duggan is deputy news director for Bloomberg Government, and he joined Federal Drive with Tom Temin to bring us up to speed on what’s ahead on the Hill this week.

Jared Serbu: And Loren, certainly not the first time we’ve gotten down to the wire on passage of a CR but there was some last minute drama both with regard to the NDAA and with the continuing resolution last Friday. Let’s start with the issues around passage of the CR because they’re important for people to know because they’re still going to potentially be issues on Friday when the CR expires. What were the holdups there?

Loren Duggan: That’s right, this wasn’t a CR that went very long. It’s just one week, seven days try to keep the government running while talks continue on, on other things. But it ran into a little bit of trouble in the senate after easily getting to the House where it became a forum to discuss some of the issues that are going on more broadly. In particular, there was an a request by Bernie Sanders, the independent of Vermont, and Josh Hawley, the conservative Republican from Missouri, to have a discussion about stimulus checks, which have come up in the talks before. There was a round of them issued earlier in the year. And it’s even been in some of the plans recently around COVID relief. But they used the floor on Thursday night, o it’s a push for this, relented on Friday to let this CR go through, make sure that the government was funded throughout the weekend and into the week. But that doesn’t mean we won’t see that debate continue this week on the CR as they consider a longer term funding bill or some solution to run past Friday.

Jared Serbu: Yeah, and as far as just doing a one week CR, does leadership seem pretty optimistic they’ll be able to get all full up appropriations bills, each one of them packaged together by Friday and passed?

Loren Duggan: They were pretty optimistic. If you heard from Pat Leahy, who’s the senate ranking member, he was pretty optimistic, as were other leaders. They were down to some pretty big decisions to make. But the number of decisions seemed to be relatively small, they were still talking at the end of last week about Veterans Affairs funding and how to budget that, whether to count it against the caps or exempted from the caps, which has been a discussion, many members of Congress like the idea of exempting it from the caps to relieve pressure on other accounts. So if they can resolve that there’s all things around immigration and the wall that there’s a path forward on that. It doesn’t rule out if we need to go into the weekend for votes, maybe doing another one that’s not unprecedented, need another CR even for a couple of days. But one week is sort of to keep the pressure on top to make sure that people were staying at the table and trying to reach agreement.

Jared Serbu: And it sounds like at least some of the issues that held up the passage of the CR last week may still be live issues on Friday, for example, I believe, Bernie Sanders and Josh Hawley still are insisting on individual pandemic payments before they will sign on to any kind of appropriations bill, if I understand that one right.

Loren Duggan: That was one of their demands. They yielded on that CR. But they’re still interested in that this week. And that would be one of the live issues in the talks, even though some of the proposals that came around last week didn’t necessarily have those payments, one from the White House, as we understand it, did talk about some payments directly to most Americans. These payments have been income based in the past and not everyone gets them if you makes more than a certain amount of money. But trying to get money into the hands of Americans seems to be the idea they’re pushing there. And again, you’re talking about people on fairly polar opposites of the political spectrum who could come together on an idea that they both supported.

Jared Serbu: Alright, let’s pivot to the defense authorization bill. There were some last minute issues getting that passed through the Senate as well. What were the problems there and how did it eventually get resolved?

Loren Duggan: Well the main thing that was working against them were the Senate rules and the clock. You need 100 senators to agree on something if you’re not going to follow the rules to the tee. And they ran into a little bit of problem with one of the senators, in this case Rand Paul, who wanted to hold up the cloture vote, which is the first vote they take in the Senate to cut off or limit debate, because he wanted to talk about provisions around withdrawing troops from Afghanistan. He didn’t like the language that was in there, wanted to draw attention to it, use the rules to do that. That was dissipated by Friday. The senators moved pretty quickly to vote on closer and then turned around pretty quickly after that, to vote to pass it. So both the House and the Senate have cleared this compromised version of the NDAA pretty widely, both had more than a two thirds vote, which could come into play, obviously, depending on what the President does with it. He’s talked about vetoing it over provisions that were in it, and in some cases, not in it. So that’s the next thing we’re keeping an eye out for what happens if that veto comes back to the House and the Senate to deal with.

Jared Serbu: Yeah, and as you suggested, the overwhelming veto proof majorities in both the House and the Senate for NDAA passage. What are members saying about the possibility that at least some of them might vote to sustain the veto, I guess that’s how you would put it, after having supported the bill initially.

Loren Duggan: Right. I mean, they are two separate questions, right. There’s the the package as it was delivered to the House and the Senate as a compromise. And then there’s this question about whether they wanted to back the president or not. You could even say you voted for the bill, but against overriding the President’s veto because you just don’t support that. Kevin McCarthy, the Republican leader in the House is one of the people who said that he would have to weigh that vote pretty closely. We could also see members who maybe didn’t support the compromise, do the opposite and fill and support overriding the veto to stand up for the prerogatives of Congress vis-a-vis the President, because there are some institutional questions here that come into play that can be even separate from the legislative issues and a measure of that size.

Jared Serbu: And finally, let’s turn back to spending issues, there are negotiations still ongoing after several months between Nancy Pelosi and Secretary Treasury Mnuchin on another round of a debt pandemic relief. I guess what, what’s the rationale for tying that to the appropriations bills that they also hope to plan on voting on later this week?

Loren Duggan: Well, that’s the calendar coming back to haunt us here because there’s only so many days left in the year to conduct all the business they have, it can take a long time to get a bill across the House and Senate floors and on to the President’s desk. So if they could package all this together into one massive piece of legislation, it would be a lot easier to get that through, get it done, and maybe wrap up business for the year, depending on on the outlook for this. So it’s an attractive vehicle for this. They’ve resisted before tying stimulus deals to spending because, for example, going into September, they wanted to get spending in place so there was no question about a government shutdown with everything going on, even when they didn’t have agreement on the stimulus package. So these talks that are going on, there’s multiple talks, there’s a group of senators on a bipartisan basis trying to work something out and get that sold up to leadership. There’s obviously a deal that came across from the White House or a package that came across from the White House. So there’s a lot of different pieces here. But the two sticking points have pretty much been the same that they’ve been all year that’s around state and local aid and how to structure that, whether to provide large amounts for that and then what to do about liability for businesses. Those two things have been persistent issues and resolving those is what’s been key to coming to some sort of stimulus package even though there are pretty wide areas where there is agreement on small business aid and money for vaccine distribution, which is obviously top of mind for people right now. 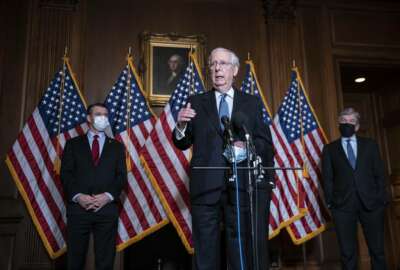 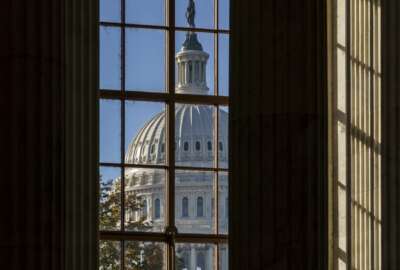