Talk about walking into a tough situation. Before the shattered windows were swept up in the January attack on the Capitol, the sergeants at arms of both the House and Senate, and the chief of the Capitol Police were all gone. Solving the long-term security issues for the Capitol falls to a new crew. For one view...

Talk about walking into a tough situation. Before the shattered windows were swept up in the January attack on the Capitol, the sergeants at arms of both the House and Senate, and the chief of the Capitol Police were all gone. Solving the long-term security issues for the Capitol falls to a new crew. For one view of what’s ahead, Federal Drive with Tom Temin turned to one member of that crew, the new Senate Sergeant at Arms Ret. Army Lt. Gen. Karen Gibson.

Tom Temin: Ms. Gibson, good to have you one.

Karen Gibson: Hey, good morning Tom. Thanks for having me.

Tom Temin: And I don’t know whether to call you general or sergeant.

Tom Temin: Okay, well, we can use that as well. And I’d like to begin with a quick review of exactly what a Sergeant in Arms does, because I think most people have kind of a Lions Club view of it. and it’s ceremonial. But it sounds like a lot more to it than what we might understand.

Karen Gibson: Yes, the Army career, a military career was a good preparation for this job. Some of the law enforcement aspects are of course new to me. But I think by the time you become a general officer, you’ve got a proven ability to lead large organizations and all that that entails. And frankly, in my career, as you go up, many of those organizations are largely civilian organizations, no longer primarily filled with military service members. Also useful in this remote work time period, I’ve led very geographically dispersed organizations as brigade commander in the Army. I had entities on five different continents. So you have to find ways to communicate, collaborate and synchronize across very vast geographic distances and time zones. I think the military is a good preparation for those broad and disparate mission sets. Again, many of those service support things that I mentioned. And then crisis management experience in crisis operations, whether that’s deployed and supported combat missions, or we displaced the entire CENTCOM headquarters when I was there, in the face of Hurricane Irma, sustaining our continuity of operations to include kinetic strikes in support of operations in Iraq, Syria, Afghanistan and Yemen. I think that’s good prep for some of the emergency response functions that were required to prepare for here at the Capitol. And then finally, I think I’d mentioned that although I’d never worked in the legislative branch before, and it is different as you become a senior military officer working through the challenges of the interagency process or, for instance, my time at the Director of National Intelligence where you’re trying to synchronize the effort of 16 different federal agencies is a good preparation for recognizing and understanding the goals and objectives of various organizations and working together with them toward common solutions that are going to balance those perhaps sometimes disparate equities to the fullest extent possible.

Tom Temin: And in many ways you’re working for and with people you might have testified in front of in earlier years. How are relations with the senators? What’s it like? Are they nice to you and so forth?

Karen Gibson: Sure. Everyone has been very courteous. I think it’s marked by I hope, mutual respect. The day to day functioning of the Sergeant at Arms is largely done through their staff. I think it would be my intent, certainly the goal is that a senator doesn’t need to get involved or interested in the details of what the Sergeant at Arms is doing to support his or her ability to perform their legislative function. If it does come to their attention, then that would indicate there’s a problem. So most of the time, we are dealing with the staff of the senators on the many aspects that the Sergeant at Arms performs to support them.

Tom Temin: We’re speaking with Karen Gibson, the new Sergeant at Arms of the Senate. And in the daily work, how much interaction do you have, A) with the House Sergeant at Arms, and B) with the Capitol Hill police?

Karen Gibson: So I probably speak to the chief of police or the assistant chief, almost, I would say, six days a week. And I deal with the House Sergeant at Arms frequently throughout the week. I welcome my new partner William J. Walker, another retired general officer. I think this is his second week on the job. So we have some very shared perspectives and backgrounds, shared visions for the future security of the Capitol complex and really try to cooperate with him to the fullest extent possible so that we can arrive at bicameral solutions when possible.

Tom Temin: It’s about what a 200 yard walk between the two spots?

Karen Gibson: Oh, no, I don’t even think it’s that between my office and his, we’re both in the principal historic Senate complex. And I’m right off the dome, and he’s on the other side.

Tom Temin: Alright. And let’s get to the report that former General Honoré prepared in the aftermath of the break in. That was primarily a House report, but have you read it? And there must be some general lessons learned and possible recommendations for both sides of the Sergeant at Arms?

Karen Gibson: Certainly, of course, I read it, I was actually on his team. In fact, that’s how I came to become the Senate Sergeant at Arms was my initial participation on General Honoré’s security review. And I would say that the 6 January attack, shocking as it was, really allowed us to reveal some systemic issues across the board. And it presents an opportunity for deep introspection and course correction, I think we have a fleeting opportunity for change, both based on an unusual appetite for change in a very tradition heavy organization, as well as potential for security, supplemental funding. And so I think it’s probably not a matter as we look to transform security at the legislative branch. It’s not a matter of doing what we did before only better. It’s finding new different, better ways to secure the Capital. Whether that’s modernizing some of our current processes that are inefficient, ineffective, or making better use of modern technologies to surveil, identify and detect threats to the Capitol. Or better integrating largely on the part of the Capitol Police with organizations that are charged with tracking intelligence and threat data for domestic or foreign threats to the Capitol. There are a number of different things that we can pursue, many of which were outlined in the Honoré report. And I look forward to working with the Capitol Police and my House counterpart, as well as the Architect of the Capitol who’s the other member of the Capitol Police board, to try to not only implement some of those specific fixes, but develop a vision, a strategic vision for transforming security at the Capitol.

Tom Temin: Yes, there was a lot of recommendations with respect to the Capitol Police on beefing up their intelligence capabilities. But you can imagine, for example, in the integrative aspect of this, just making sure that if the Capitol Police do get some intelligence piece of information that could affect the Sergeants at Arms, that there would be a mechanism by which they tell you.

Karen Gibson: Absolutely, yes. And I don’t think that was a primary shortcoming. But it’s really a matter of integrating well with the elements in the metropolitan area that are tracking a variety of threats. I think 6January was unique in that the Capitol itself was a specific focus of the threat. But many times it may be a more generalized threat to federal buildings in the Washington area or to symbols of government, in which case we need to be working closely with the Metropolitan Police, the Park Police, the Secret Service, the FBI, Department of Homeland Security, and others.

Tom Temin: And by the way, speaking of your physical office, you’ve got a really good one, don’t you, with respect to Washington, DC?

Karen Gibson: I do, but I don’t want to brag about it too much, because I’ve heard that senators who outrank me may look out the window and decide that someone else should have this office, and I’ll find myself in the basement. But I have a great view of the Washington Monument and the Lincoln Monument. And it just reminds me every day when I come in, and look down the mall, what an honor it is to support this branch of our government.

Tom Temin: You can stare right down a couple of miles away and right into Abraham Lincoln’s eyes there. And just finally, any other impressions on the job so far.?

Karen Gibson: Well, as I said, it’s a tremendous honor. I was a child of the bicentennial, and 1776 was really formative year in terms of my understanding of how our nation was formed and how unique our system of government was from its inception. And while it’s sometimes messy and frustrating up close, it’s just really, as I said, a tremendous honor to come work here. And I learn something every day, I see something new every day. The other day I found a door that says, John Adams walked through this door. And so I think, part of our charge here is to honor tradition while embracing innovation, and ensuring that our support and security processes are modern and sufficient in a way to enable that rich tradition to continue.

Tom Temin: Karen Gibson is the Sergeant at Arms of the Senate and retired Army Lieutenant General. Thanks so much for joining me. 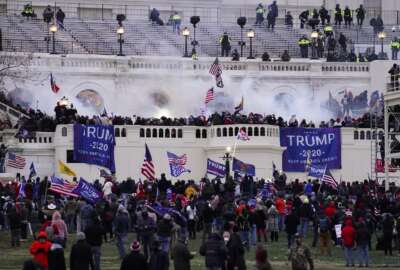