With the planned launch of its new heavy rocket and a payload headed to orbit the moon, it was planned as a red letter day for NASA. Lots of contractors have been working on and behind the scenes for the since postponed launch. On Friday, I caught up with one of those contractors. Leidos has several information...

With the planned launch of its new heavy rocket and a payload headed to orbit the moon, it was planned as a red letter day for NASA. Lots of contractors have been working on and behind the scenes for the since postponed launch. On Friday, I caught up with one of those contractors. Leidos has several information technology support contracts to help NASA keep the lunar enterprise going. The Federal Drive with Tom Temin  spoke with vice president and division manager at Leidos, Nate Apodaca, before he departed for Florida.

TomTemin: Before you head down there, let’s get maybe a sense of the scope of the IT. I mean, this is probably as much an information technology venture, this launch back to the moon, as it is rocketry and telemetry and orbital science?

Nathan Apodaca: Absolutely, I think, you know, with us monitoring the network, and then making sure all of the network connections are operating, the backbone is operating, that people are able to communicate and collaborate across all of the different NASA centers, as well as providing monitoring, maintain all the endpoint systems, we’re going to be monitoring and taking care of the video systems that are going to track the launch as it takes off, we’re gonna have boots on the ground there to respond to just a myriad of issues. NASA TV is also supported by Leidos. So a lot of integration points across the gamut across the enterprise. And it’s always very interesting Tom, because, for us, a successful launch is nothing happens. So I mean, it’s very interesting, as long as the rocket takes off and gets to where it’s going, and nobody calls me or my team, we did a great job.

Tom Temin: Right. Nothing happens except the launch itself. And how far back does planning actually begin for the moment of the liftoff?

Nathan Apodaca: Oh, I mean, this thing has been going on. I know, for us, as long as we’ve been engaged with NASA, which is over three years, but I mean, NASA has been working, you know, five to seven years, preparing for this launch.

Tom Temin: And what kind of exercises what kind of scenarios I mentioned, there must be the running  “what if” scenarios and non-live fires, if you will, of the launch. Tell us more about that process.

Nathan Apodaca: They run the gamut of what they call dry dresses and wet dresses. Dry dresses would be, you know, getting the rocket prepared with no propellant, no fuel, nothing really activated, but just can we go through the physical motions of getting the rocket ready to launch? And are there any issues there? Then we mature into what is called wet dress, which it’s basically fired up, primed and ready to go, like we were actually going to launch and there’s multiple iterations of that. And then invariably, that, you know, we flush through issues and resolve them all focusing on the 29th.

Tom Temin: Now, there are lots of computers aboard the rocket that control the engines, that monitor what’s going on, the sequence and all of this. I mean, I only know what I see on TV when it comes to rockets. Those I imagine are not Leidos, but they interface with the systems that you’re using elsewhere?

Nathan Apodaca: Absolutely.  Well said. That’s exactly right. So most of those mission systems are insular and managed by their own independent mission and staffs and mission folks, but but we definitely have to interface there. Sometimes there’s some monitoring, or at least they want to connect to the NASA administrative network to be able to do some data transport or some storage. And we facilitate that.

Tom Temin: What about the capture of data, and then for later analysis, because data amounts I’m imagining, again, are very large and begin the minute someone says, lift off, till the rocket returns?

Nathan Apodaca: Now, it’s exactly right. So I think, you know, it’s very important that we, you know, maximize the infrastructure to the greatest degree that we’re able, and that’s a lot of times where we can lend a helping hand to the mission systems, sometimes, depending on the mission or the mission operator. They’re not necessarily scaled for the amount of data that they get access to a lot of times because we don’t know. We’re doing science and part of science is investigating the unknown. So as they start unraveling these and digesting them, this telemetry data or scientific data that’s coming across, you know, we’re able to sort of post serve as a backup for them if they need, you know, places to store things or an alternative path to get somewhere.

Tom Temin: We’re speaking with Nathan Apodaca, he’s the vice president and division manager at Leidos. How many people do you have on this particular job, this launch?

Nathan Apodaca: This is what you would call an all hands event for us. So everybody’s engaged. My divisions, right around 1,000 people all over the country, including some folks in Russia. And so yeah, this is all hands on deck, everybody will be engaged, everyone will be monitoring, and making sure that they are able to be as responsive as possible to make sure this thing goes off without a hitch.

Tom Temin: And I’m old enough to remember the Mercury-era launches on television and what you saw in NASA were these big hard wired steel consoles. Today, it’s all I guess, PCs, basically that interface. What are the NASA flight managers, the flight operators, the flight director’s staff sitting in rows, they’re looking up at stuff, what’s their support infrastructure?

Nathan Apodaca: So, you know, they’re operating off laptops, as you said, and we’ve got boots on the ground people to respond to all of those centers. And  you would imagine, there’s a ton of redundancy So you have the launch facilities there at Kennedy, you’ve got launch support facilities at Johnson, tertiary of launch facilities at Marshall, all of those folks, we’re supporting all of those locations in case of failover, or backup or something were to happen. We’ve got a lot of boots on the ground and a lot of different locations just to make sure that everything ticks and ties and is flowing nicely.

Tom Temin: And in contracting with NASA, what was the route to it? Was it a full and open for this particular IT support contract? Did they use a GWAC that you have a position on? Or how did that happen?

Tom Temin: And did you have to bring in a equipment and wiring and network component pieces to all of this? Or was the NASA network and all the machinery already in place? And you’re managing it?

Nathan Apodaca: Yeah, this was sort of pick up the football while they’re on the on the run, and just keep the momentum and making sure we get the ball across the goal line.

Tom Temin: And what are some of the telecommunications requirements for this whole project? You’ve got ground networks, you’ve got to communicate with the rocket itself, which at the same time is sending down information?

Nathan Apodaca: You’ve got everything from you know, Am-FM to microwave, largescale WAN technology, you know, it’s quite, I use the term mesh lightly, because it’s not a formal mesh network. But if you were to look at it of all of the different interconnections and different types of network types for things like audio, radio, video, data transport, it spans the gamut.

Tom Temin: And Leidos, of course, has a pretty big footprint across the federal government. I just came through a TSA screening center or two recently and there you were, named up there on the banner. But is there a sense among your people that this is a little bit above because of the historic nature of what’s supposed to happen? Namely, getting back to the moon?

Nathan Apodaca: I think, you know, Leidos as a whole, we’re very mission, operations-driven. And we like to know that we’re contributing to something greater than ourselves, outside of our kind of corporate strategy. And right now, you’d be hard pressed to find something bigger. I mean, other than the very first space shuttle launch, like in recent history. This is the biggest thing that NASA has done. And so it’s a really cool feeling for us to be on the forefront of that and able to support them.

Tom Temin: And will you have your own two eyeballs on it? That is the blast off?

Nathan Apodaca: Well, I will probably not be sleeping, we have to be on site, I think 1:30 or 2am, for a what is scheduled to be an 8:20ish launch window. So you know, I think the great thing about that was as we were notified, you know which time we need to leave and how we need to arrive on site and all of the intricacies of getting onto Kennedy or near Cocoa Beach to see the launch. It just shows the depth and breadth and what they’re expecting. The amount of people that are just going to come – just lay people not even NASA-related or mission-related, just people that want to go and get excited about science and about what NASA is doing. They just want to be there on site. And so they’re expecting a lot of people there.

Tom Temin: Nate Apodaca is a vice president and division manager at Leidos. I spoke with him friday before he departed for the Kennedy Space Flight Center in Florida. 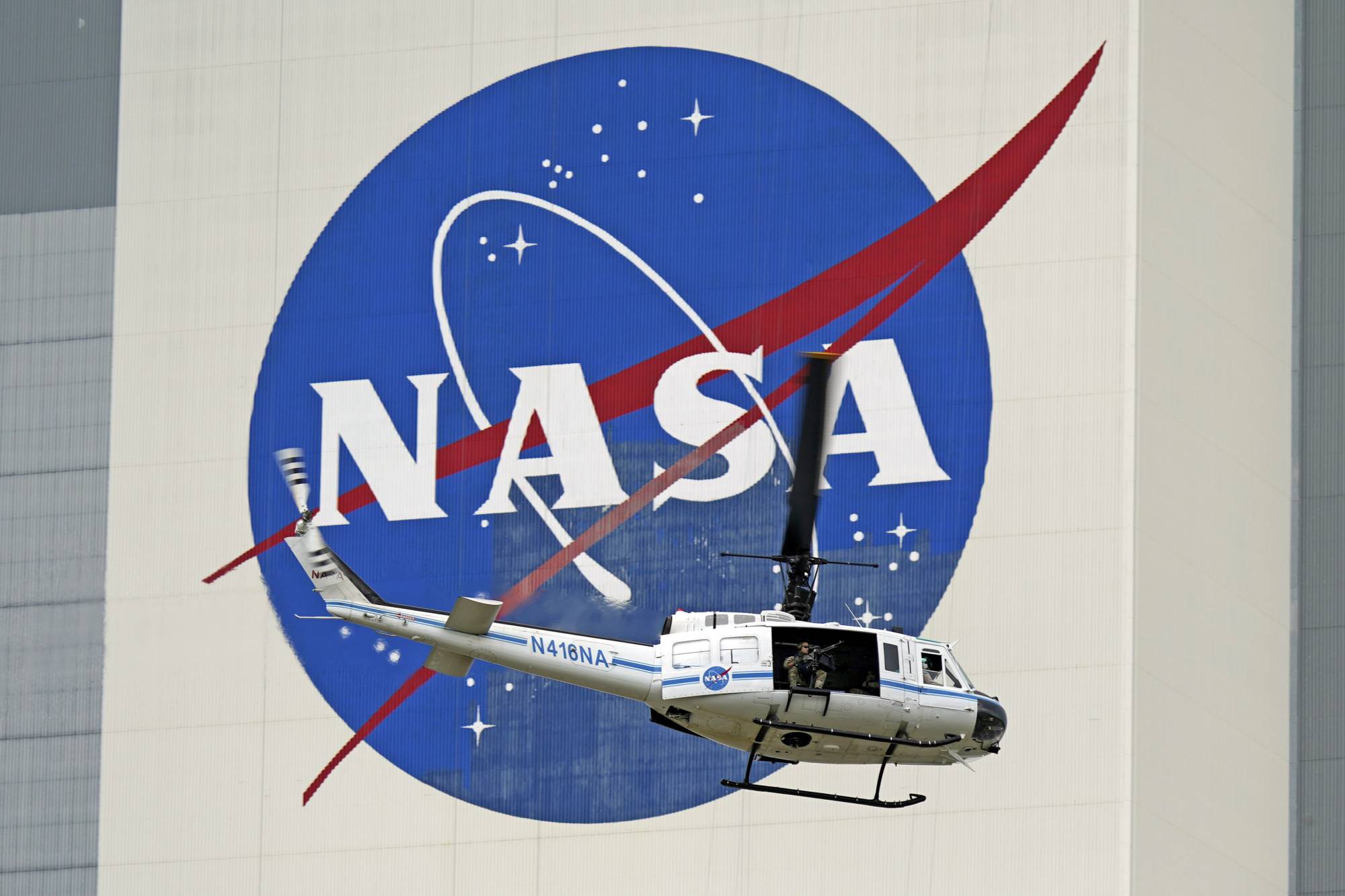