The National Institute of Health’s Information Technology Acquisition and Assessment Center (NITAAC) has about two years to award its next great governmentwide acquisition contract called CIO-SP4.

While this may seem like a lot of time, NITAAC already is getting comments back on its draft solicitation.

Keith Johnson, the contracting lead for the CIO-SP3 and CIO-SP4 vehicles for NITAAC, said industry feedback was due back to his organization by May 15 and he expects the final solicitation for the $40 billion IT products and services GWAC to be more responsive to small businesses and agency customers alike.

“The draft has a direction in terms of some items that we would like to change, but all of that is preliminary,” Johnson said in an interview with Federal News Network. “For example, we would like to go to one GWAC. Currently we have a small business GWAC and an unrestricted GWAC, and the scope of both of those contracts mirror each other. There are a number of reasons why we would like to do that. Most notably, as a benefit to our small business owners.”

Johnson said another change is around the scope of the contract to address new and modern technologies and processes.

Less than 2 years left on CIO-SP3

The departments of Health and Human Services and Defense have been the biggest users of both versions of the CIO-SP3 over the last four-plus years.

The popularity of the both contracts is why Johnson has been aggressively seeking feedback on the changes NITAAC is proposing.

“We are just soliciting feedback from industry. That is very important part of this process. We may not go in a certain direction if we receive a good reason not to from industry,” he said. “We plan to go through the comments and deliberate on what we plan to do moving forward. There is some talk of releasing another draft RFP. The current draft speaks a lot about self-scoring, but we haven’t released self-scoring template or sheet for industry to chew on. There is some talk of releasing a draft self-scoring sheet. We are still deliberating that.”

Contractors are most interested in the preliminary decision by NITAAC to move CIO-SP4 to one GWAC instead of two. Johnson said there are several reasons for this proposed change.

Making up for missed opportunities

Johnson said small businesses could bid on many of the task orders under the CIO-SP3 unrestricted GWAC, but don’t have the opportunity.

Johnson said he wants to make sure small firms know NITAAC is not turning its back on them, but actually opening the door to more opportunities.

Johnson said NITAAC expects to release the final solicitation in late November or early December with responses due three or so months after that. He said the award timeline will depend on how many proposals they receive as NITAAC expects a lot of interest from vendors. 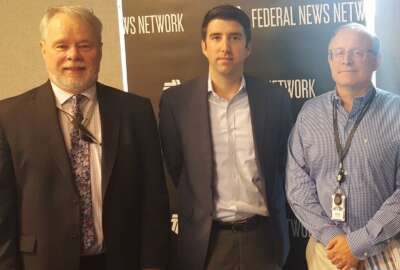