The military’s attempt to transfer medical records to electronic format hit a major milestone as it integrated four new bases into its system.

The roll out is the second wave of bases brought into the GENESIS fold after the initiative started in 2017 with one base and then added four others in 2018.

“It’s important when implementing a solution of this magnitude to remain focused on the customer: our clinicians and patients. It’s really not about IT. It’s about the patient,” said Bill Tinston, program executive officer of the Defense Healthcare Management Systems.

GENESIS will be fully deployed in 2023 and will provide a standardized, advanced electronic health record to more than 9.5 million Defense Department beneficiaries. It will also give an advanced platform to 205,000 military health staff around the world.

GENESIS “enables the application of standardized workflows, integrated health care delivery, and data standards for the improved and secure electronic exchange of medical and dental patient data across the continuum of care, from point of injury to the military treatment facility,” a September 7 statement from the Defense Health System said. “Most importantly, MHS GENESIS enhances patient experience of care. In addition, the new system will increase efficiencies and improve patient safety.”

Starting spring 2020, GENESIS will deploy in new bases every three months. More bases in California, Nevada and Alaska will see the addition of GENESIS in the next three tranches.

Leidos crafted the GENESIS system as part of a $5.5 billion contract based on commercial software developed by Cerner.

The contract isn’t without its faults though, the contract’s costs grew by 27% since it was initially awarded in 2015.

DoD found during its testing of the first wave of the rollout the system was not operationally effective or operationally suitable.

In May 2018, DoD’s Director of Operational Test and Evaluation found cybersecurity issues, long login times, inadequate training and concerns about the program’s ability to work worldwide.

Users at all four of Pacific Northwest sites where Genesis was first fielded rated it “low” for usability and that the system contained hundreds of cybersecurity vulnerabilities.

The issues with GENESIS led Congress to order DoD to send it a written progress report in the 2019 appropriations bill. It also asked the Government Accountability Office to do its own study. That study is not yet released.

Since then, the program has made improvements.

Login times decreased from three minutes to 20 minutes to an average of 40 seconds.

“During the stabilization and adoption period, we upgraded the system and we were able to streamline and really look at our end-to-end processes,” Stacy Cummings, then-program executive officer for Defense Health Management Systems said last year. “Forty seconds is not necessarily where we want to be in the long run, but it’s a significant improvement. And we continue to balance things that DoD requires, like cybersecurity, and the types of logins that we do on the Defense side that might be a little different than they do in a commercial environment. And we continue to balance that access versus speed to make sure that we are absolutely protecting our beneficiaries’ personal health data.”

DoD and the Department of Veterans Affairs are still working to ensure their separate electronic health systems are interoperable.

The two departments say their systems can talk to each other through an application called Joint Legacy Viewer.

“Right now we are already sharing data and health information with the VA, but it’s more of a static display and not an interactive or dynamic display,” then-DHA Director Vice Adm. Raquel Bono said in late August. “This is a big step and it’s exactly what we need to do to in order to provide the kind of care our beneficiaries in DoD and VA need.” 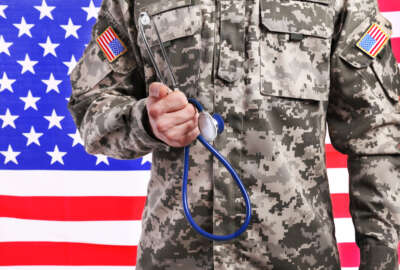