The military is likely to extend its stop move order past the original sixty days to avoid the spread of coronavirus, according to the Air Force’s top airman.

Chief of Staff Gen. David Goldfein said the military may consider preventing troops from moving to new orders or coming home from overseas as late as August.

The military is likely to extend its stop move order past the original sixty days to avoid the spread of coronavirus, according to the Air Force’s top airman.

Chief of Staff Gen. David Goldfein said the military may consider preventing troops from moving to new orders or coming home from overseas as late as August.

The current stop movement order started in mid-March and is set to end on May 11. More than 120,000 troops are affected by the order.

“If you look at the COVID-19 curve that most of us are operating under on May 12 we’re actually not sitting much better than we are here today,” Goldfein said Monday during a virtual townhall on Facebook Live. “My sense is that we’re probably going to see an extension of the stop movement for some period of time.”

Goldfein said Defense Secretary Mark Esper tasked Undersecretary for Personnel and Readiness Matt Donovan with looking into whether the stop move order should be under the jurisdiction of the Defense Department as a whole or if dates should be left for the individual services to decide.

The Air Force chief also said DoD is taking into account schooling as it considers extending the stop move order.

While DoD’s stop order movement got praise from lawmakers and academics for helping to stop the spread of the coronavirus, there have been some unintended consequences.

“Not only does the stop move order preserve the health and welfare of DoD civilian employees, service members and their families, but it also increases positive outcomes for local communities and ensures our force readiness is sustained,” 35 lawmakers wrote in a letter to Esper on April 2.

“As soon as the stop order went into place on March 11 we started hearing some stories,” Rep. Debra Haaland (D-N.M.), author of the letter, told Federal News Network. “Often folks have put rental deposits on one house and they are expecting to pay one for another. They end up having two rental payments or a rental payment and a mortgage at the same time.”

According to a Blue Star Families Pain Points survey, one in five military families are reporting they are or will be paying rent in two locations due to the order.

“I think the PCS move numbers are going to get worse before they get better,” Kathy Roth Douquet, CEO and co-founder of Blue Star Families told Federal News Network. “In some cases someone else has been promised to move into these places. That’s going to be a rolling problem for a few months until we figure this out.”

The study found 6% of service members do not have housing because of delayed PCS.

“We sold our home and now our PCS has been put on hold,” one respondent told Blue Star Families. “We have three high-risk people in our family and will soon be homeless or face massive Airbnb costs or hotel costs that we cannot afford. We also have nowhere to move our belongings and no one to do it because the movers are no longer allowed to come.”

Haaland’s letter urges Esper to support military families forced to take on monetary costs because they cannot move to their next permanent changes of station.

The letter asks DoD to issue “guidance and resources needed to ensure care and support to every military member and family adversely affected by this order.”

The letter goes on to say, “We strongly urge you to issue guidance allowing commanders to use the greatest possible breadth of relief options for these families and to further empower commanders to coordinate with traditional and non-traditional partners that may rapidly address the needs of these families.” 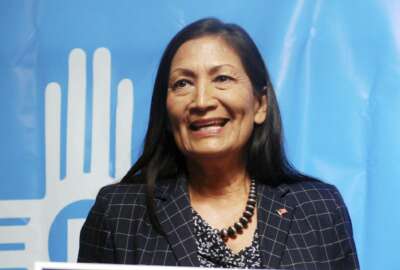