About 11,000 soldiers and 18,000 airmen have their next orders on hold due to the Defense Department’s “stop movement” order, which will stay in effect until mid-May.

Service members from all the military branches are waiting in limbo after DoD delayed most permanent changes of station (PCS) in response to the coronavirus outbreak. Some troops and their...

About 11,000 soldiers and 18,000 airmen have their next orders on hold due to the Defense Department’s “stop movement” order, which will stay in effect until mid-May.

Service members from all the military branches are waiting in limbo after DoD delayed most permanent changes of station (PCS) in response to the coronavirus outbreak. Some troops and their families have been or will be forced to move into temporary housing or hotels as they wait for the Pentagon to open up domestic travel again.

“We have not canceled any PCS moves; however, we are implementing diversions to stateside locations for some soldiers graduating from initial entry training with orders to overseas locations,” Lt. Col. Mary Ricks, a spokeswoman from Army Human Resources Command, told Federal News Network.

Meanwhile, the military services and U.S. Transportation Command are stopping the shipments of household goods during the outbreak — the military makes up 20% of the moving goods industry.

The Navy says it is still calculating how many sailors are affected by the stop movement order.

“The Navy is making risk informed decisions to ensure we accomplish our mission while protecting the health and safety of our force,” Lt. Cmdr. Matt Knight, a spokesman for Navy Personnel Command said. “Coronavirus poses increasing challenges to our force health protection and readiness, and that is why we need to refocus on mitigating its spread within our ranks and among our families. We are currently unable to provide exact numbers. We are still assessing how many people are in the process of executing their PCS, how many are being deemed mission essential, and how many require waivers to allow the PCS to continue.”

The moving holdup will put more pressure on the military’s PCS systems as peak moving season starts during the summer, right when the stop movement order is planned to lift.

The military moves about 40% of its people in the summer.

The Army says it is looking into staggering moves to ease the burden.

“Human Resources Command realizes the anxiety created with a permanent change of station move, especially for those soldiers moving during the peak summer season,” Ricks said. “We are developing plans to adjust report dates, as needed, for soldiers affected by travel restrictions.”

The Army already gave its PCS hotline resources to help soldiers figure out issues with their move during the COVID-19 outbreak.

“We support soldiers and their families, as well as civilians, affected by the secretary of defense’s stop movement order,” Col. Angela Butts, chief of Army Personnel’s Records Division, told Federal News Network. “Our number one priority is to provide the latest Army guidance to soldiers and their families, assisting them with navigating the nuances impacting their travel.”

The call center has seen an increase of 150 queries per day.

“Say a soldier calls and says she has shipped her household goods and she’s on leave and her new report date is in a domestic location,” Butts said. “We advise her based on the latest guidance to continue on to her next duty station; however, if she is heading overseas she would need to contact her command for specific guidance because those moves require an exception to policy.”

TRANSCOM issued service specific policy last week on how personal property will be handled for moves during the stop movement order and how to handle goods that are already shipped.

“The military personnel community will make any decisions regarding PCS cancellations,” David Dunn, a spokesman at TRANSCOM told Federal News Network. “Similarly, unit commanders will make decisions on which shipments stay ‘on hold’ and which shipments continue as planned.  Some shipment, like those for retirees and separates, were exempt from the stop movement orders — those categories of shipments account for roughly 15% of our annual volume.”

There are no restrictions for goods that are already in-transit. The military services provided their own policies and exceptions for goods. For example, the Navy stopped all shipments except packouts that have already started and shipments for retirees and sailors who separated.

The impact of stopping shipping will reverberate throughout the military and the economy.

“In the short term, our efforts are focused on coordinating with leaders in human resources, finance, policy, and logistics, as well as with industry, to ensure we can provide accurate, timely information to DOD families on their shipment,” Dunn said.

He added that when shipments do resume, DoD will prioritize and manage them in a deliberate manner.

“We will ensure we manage schedules carefully, and will not simply open the floodgates on our valued partners in the moving and storage industry,” Dunn said. “Make no mistake, it will be a challenging period with high demand but we’re thinking it through now. We’re also thinking through how we manage and reschedule shipments if conditions do not improve and the stop movement order is extended.”

Meanwhile, moving companies advocates American Moving and Storage Association and the International Association of Movers are asking Congress for a $187 million bailout to handle the loss of business.

“If relief is not granted providers will suffer unprecedented economic losses due to the inability to service Department of Defense business,” the request for relief states. “Household good providers have reserved their capacity in anticipation for these shipments and are now left with no business for the suspension period. It is likely and estimated that entities will go out of business or enact severe layoffs.” 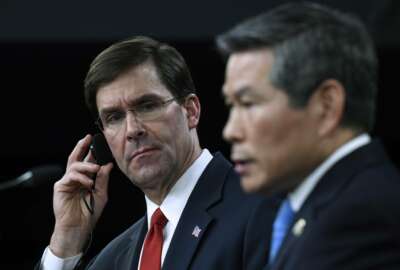 US and SKorea may cut back military moves due to coronavirus