A Congressional panel looking at defense priorities several decades into the future is doubling down on the need for the Defense Department to embrace artificial intelligence and put it into almost everything big the department does.

The Future of Defense Task Force released its report this week, and calls for Manhattan Project levels of attention to AI. It recommends requiring all new major defense acquisition programs to be AI-ready and to evaluate at least one...

A Congressional panel looking at defense priorities several decades into the future is doubling down on the need for the Defense Department to embrace artificial intelligence and put it into almost everything big the department does.

The Future of Defense Task Force released its report this week, and calls for Manhattan Project levels of attention to AI. It recommends requiring all new major defense acquisition programs to be AI-ready and to evaluate at least one AI or autonomous alternative prior funding.

“That’s a lot of money,” Rep. Seth Moulton (D-Mass.), co-chair of the task force, said Wednesday at a Brookings Institution event. “That’s a big shift. That’s saying that we need to dramatically change course of the Department of Defense with the structure and the amount in our budget.”

The authors wrote in the report that “AI will impact nearly every aspect of society and has the potential to be one of the key economic drivers over the next century. The incorporation of AI into the military and national security realms will fundamentally change the way wars are fought and won. Whichever nation triumphs in the AI race will hold a critical, and perhaps insurmountable, military and economic advantage.”

DoD already created a centralized office, the Joint Artificial Intelligence Center, to build AI into the Pentagon and is increasing funding. However, the task force urges DoD to put a larger emphasis on AI.

“Our conclusions are we have a lot to worry about and we do need to make some changes,” Moulton said.

The task force recognizes China and Russia as near-peer competitors, but also acknowledges ways DoD is holding itself back. It calls for a more whole-of-government approach to security, especially for areas like cybersecurity.

It states that biotechnology will be a weapon of the future and that emerging technologies offer great commercial benefits, but also nefarious uses.

To hedge against all of those things, the report calls for an increase in science and technology research funding to 3.4% of the defense budget.

It requires the services to spend at least 1% of their budget on integrating new technologies and expanding funding for innovative organizations like the Defense Advanced Research Projects Agency, defense labs and university partnerships.

Along those line the report also calls for a spur in innovation along the lines of acquisition and a divestment from legacy platforms.

“What we recommended is that an outside organization, this is actually our fourth recommendation in the report, a have a commission stood up led by the RAND Corporation, or some similar agency to study legacy platforms within the Department of Defense,” Moulton said. “It would determine their relevance and their resiliency to emerging threats over the next 50 years. They should look at everything from how services are organized down to specific weapon systems and specific future programs that we’re investing in. They need to say that ‘We cannot afford to be spending all this money on platforms that are easy to defeat by emerging technologies, when we have to invest much more in these emerging technologies themselves.’”

It calls for further review of the defense acquisition system to bring in more nontraditional companies, and increase partnerships between program managers and industry.

The report addresses workforce shortfalls. It encourages DoD to put more money in STEM primary education and supports a bill to create a pathway to citizenship for talented foreign nationals.

“If you would ask anybody in America eight months ago ‘Do we have a supply chain weakness or a single point of failure when it comes to producing masks and personal protective equipment for doctors and nurses and hospitals?’” Moulton said. “I don’t think anyone would have raised any alarm whatsoever. Now we all know that that’s a real problem, that we’re dependent on it from China.”

The authors of the report say DoD should form a National Supply Chain Intelligence Center to monitor and protect interests, and that DoD should find and eliminate single points of failure in its chain. 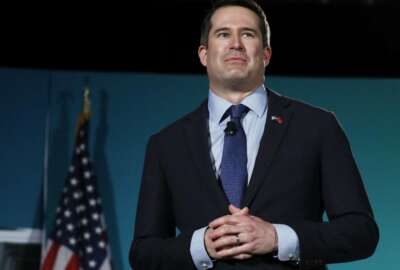