The Trump administration’s April 11 directive to cut the federal workforce and improve performance runs parallel to initiatives the Defense Department and Congress have been working on for years, but how much the directive will further those efforts is still unclear.

The White House memo requires agencies to take immediate actions to reduce the workforce and come up with a plan to maximize worker performance.

DoD and Congress already have policies on the books to...

The Trump administration’s April 11 directive to cut the federal workforce and improve performance runs parallel to initiatives the Defense Department and Congress have been working on for years, but how much the directive will further those efforts is still unclear.

The White House memo requires agencies to take immediate actions to reduce the workforce and come up with a plan to maximize worker performance.

DoD and Congress already have policies on the books to slim the civilian workforce. DoD directed a 25 percent cut across the board to its headquarters functions. Congress mandated further cuts to headquarters, the senior executive services and the National Security Council in the 2017 defense authorization bill.

So who in DoD will take the brunt of the administration’s two-year effort to make the government “dramatically more accountable, more efficient and more effective,” as Office of Management and Budget direct Mick Mulvaney characterized it?

The answer is no one is sure yet.

As of April 13, DoD has not released any new specific guidance on where it should cut in the wake of the OMB memo. The Office of the Secretary of Defense told Federal News Radio that DoD’s policy experts are going through the White House memo now and they don’t have any updates as to what positions are open for hiring.

Defense analysts are in the same boat.

“There have been a lot of OMB directors that have put out memorandums very similar to the one that came out in the last couple of days and it deserves serious thought and serious review. [The Trump Administration is] very serious about government reform and they should be,” Arnold Purnaro, CEO of the Purnaro Group and member of the Defense Business Board, told Federal News Radio.

Amy Schafer, research associate at the Center for a New American Security, said the White House memo was meant to lift the across the board hiring freeze put into place in January. Instead, DoD will have to be more strategic with its hiring and who it keeps on staff with this new policy.

“It’s an admirable goal, but unfortunately it’s not really clear right now how they plan on going about this sort of strategic hiring freeze versus a blanket hiring freeze,” Schafer said. “The Pentagon was already mandated by Congress to cut their civilian workforce. They were on track, according to the [Government Accountability Office] to cut 6.8 percent from 2012 to 2017.”

Schafer said it’s unclear if the Trump administration wants new cuts to happen on top of the cuts that are already in place.

DoD civilian employees may have one thing to put them at ease though. The Trump administration wants to bump up the defense budget.

“Maybe we will see a little bit less aggressiveness toward cutting DoD civilians. [The White House] did speak to cutting things like the EPA and the State Department to make sure that DoD is fully funded, but that may mean we see DoD expected to take on the mantle of some of these agencies to create proposed efficiencies and consolidate functions,” Schafer said. “My concern is we will see aggressiveness towards cutting DoD civilians in parallel with also seeing them asked to take on more things.”

Those extra responsibilities might come from the Energy Department, which maintains the nuclear stockpile, or from the Labor Department’s veteran training.

DoD found the hiring freeze to be burdensome on the military.

“There is an impact [from the hiring freeze], to be honest about that,” Sgt. Maj. of the Army Daniel Daily said during a hearing last month.

“Not only do you have an employment issue, but a childcare issue tacked on top of it, this could be really bad for us,” he said.

The hiring freeze forced the military services to get approval from the highest civilian position, the secretary of the service, in order fill a position at a child care center.

“To this day our acting secretary has already made 3,600 exceptions [to the hiring freeze] just for CDCs alone and over 5,500 exceptions to hire civilians … to fill critical roles on our installations. We are working through each one of them. It is a by-name exception for each one of those,” Daily said.

But the freeze also put extra strain on service members who had to pick up the slack from civilian vacancies.

Master Chief Petty Officer of the Navy Steven Giordano said the Navy was already having trouble meeting some mission requirements due to budget issues; adding the hiring freeze only conflates the problem. By not hiring civilians, more pressure is put on military workers to finish a job.

“There becomes a change in the workload associated with the military counterparts because we still have to be successful in meeting those mission requirements,” Giordano said.

That isn’t to say that DoD doesn’t have a bloated civilian force in some areas.

Defense personnel experts told the Senate Armed Services Committee during two hearings in 2015 that the Pentagon is spending more money and getting less in return.

The Joint Staff has burgeoned to more than 4,000 employees, Office of Secretary of Defense to 5,000 and the combatant commands have grown to more than 38,000, former DoD Undersecretary for Policy Michele Flournoy said.

Purnaro said the large workforce is making the department sluggish.

“The growth in Defense infrastructure has been continuous. The tendency has been to add, rather than subtract. As we have added more staff, more layers and more infrastructure, we have slowed the decision process, expanded the number of players and made the overall system more risk adverse, at a time when we need to take more risk and make quicker decisions,” Purnaro said.

But if DoD wants to seriously cut costs and bloating, the civilian workforce is only part of the problem.

The Defense Business Board found $125 billion DoD could save over five years through streamlining business processes and IT systems without losing any employees.

“There probably are certain savings that can be yielded from thinking thoughtfully about how we organize staff and personnel, but I don’t think that it’s the cash cow that everyone assumes it is. There are a lot of other areas in which we spend a lot of money in DoD. Notably, we see a lot of the DoD budget devoted to military personnel, who were exempted from the initial across the board hiring freeze and there is no reason to think they won’t be exempted from this next round as well,” Schafer said. “There is a question of whether there are jobs the military is currently doing where we could see cost savings yielded from moving those into civilian roles.” 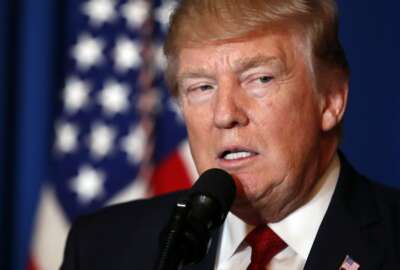