The cost of security clearances next year will hold steady at 2019 levels, as the Defense Department prepares to assume responsibility over the governmentwide security clearance portfolio at the start of the next fiscal year.

The plan to keep prices consistent is a change from previous years, as the costs of conducting a background investigation have bounced...

The cost of security clearances next year will hold steady at 2019 levels, as the Defense Department prepares to assume responsibility over the governmentwide security clearance portfolio at the start of the next fiscal year.

The plan to keep prices consistent is a change from previous years, as the costs of conducting a background investigation have bounced around in recent years due to organizational changes and past data breaches.

Costs, for example, went up in 2017 and 2018 as the National Background Investigations Bureau (NBIB) moved into initial and full operating capability at the Office of Personnel Management. OPM in July 2015 retroactively charged agencies more for security clearance processing to help offset costs of the massive data breach that impacted 21.5 million current and former federal employees, contractors and others. DoD alone paid more than $132 million more in 2015.

As Federal News Network has reported, OPM’s NBIB and the Pentagon’s Defense Security Service will merge with other DoD entities to create a new organization — the Defense Counterintelligence and Security Agency (DCSA).

The DCSA received its own budget justification for the first time this year, and DoD’s 2020 request sheds slightly more light on its plans to handle security clearances for most of government.

The Pentagon attributes the drop in security clearance revenue and operating costs to its ever-growing continuous evaluation/vetting program, which has already expanded over the past year to cover low risk periodic reinvestigations. A heavier reliance on continuous evaluation will cut back on the number of pending clearances in the inventory and will allow DCSA investigators to focus their time and attention on more complex cases, DoD said.

“While the 2020 budget submission assumes decreases in the overall budgetary requirements and workload due to CE/CV, DCSA will closely monitor the actual impacts,” DoD wrote in its budget request. “Conversely, agencies using CE/CV for non-issue cases in lieu of traditional reinvestigations may result in a higher percentage of more complex investigations in DCSA’s inventory, requiring contract modifications with vendors.”

The security clearance transfer and merge of NBIB with DSS will be made official with an executive order, which officials have said the President is supposed to sign “soon.” DSS is poised to take over the security clearance portfolio by Oct. 1, 2019 and has been making organizational changes to prepare for the move.

Interestingly enough, DoD assumes a smaller operating budget in 2020 than in 2019 but more personnel. The Pentagon projects 3,513 employees under DCSA’s personnel vetting directorate, about 300 more people than NBIB’s 3,216 federal workforce.

According to DoD’s budget justification, the transfer of the security clearance program will occur in phases based on the ongoing development of the National Background Investigation Service (NBIS), the IT systems that the Defense Information Systems Agency had originally been charged to build for NBIB back in 2016.

The NBIS and the 40 people who manage it recently moved to the Defense Security Service in preparation for the security clearance transfer.

The new IT system will become operational in phases, with OPM continuing to secure, maintain and update the legacy systems necessary to the DCSA’s operations as new capabilities on NBIS become available. The first phase of NBIS will make Tier 1 investigation processing operational for a “select number of federal customers,” DoD said.

“During the transition phase, DCSA may utilize OPM’s existing processes and systems on a reimbursable basis and likewise OPM may utilize some of DCSA’s resources, also on a reimbursable basis, in order to complete the existing backlog inventory,” the Pentagon wrote. “As part of the transfer and transition from OPM to DoD, DCSA plans to increase its direct embedded staffing levels by up to 250 employees to replace support functions previously provided as part of OPM’s common services.”

Yet neither the DoD nor the OPM 2020 budget request includes an estimate for how much these reimbursable services may cost.

The costs of these reimbursable services may hold great consequence for OPM, which is expected to lose nearly $1 billion in revenue through the transfer of the security clearance business to the Pentagon in mere months time. The gradual loss of the security clearance business will also likely deliver a blow to other parts of OPM’s budget, namely the agency’s “common services.”

NBIB currently pays OPM to use the agency’s legal, IT and security services, for example, which funds other functions within the organization.

But based on the DCSA’s transition plan, OPM won’t lose its entire security clearance business at all once.

The security clearance backlog on Sept. 30, the day before the program’s transfer is expected to become operational, will be worth $546 million, according to OPM’s estimates in its joint budget request with the General Services Administration. 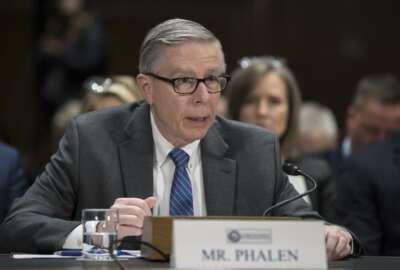