This story was updated on Monday, March 16 at 7:00 p.m. to reflect additional statements from the Defense Department and the Professional Services Council.

The Pentagon has at last named a permanent director to lead its security clearance agency.

This story was updated on Monday, March 16 at 7:00 p.m. to reflect additional statements from the Defense Department and the Professional Services Council.

The Pentagon has at last named a permanent director to lead its security clearance agency.

Lietzau currently serves as the director of DoD’s Personnel Vetting Transformation Office, the  organization the Pentagon stood up to oversee and implement the change management activities associated with the security clearance transfer.

He’ll replace Charlie Phalen, the longtime security executive who the Obama administration first tapped to the lead the Office of Personnel Management’s National Background Investigations Bureau back in 2016.

DoD named Phalen to serve as NBIB and DCSA director concurrently last summer, before the two agencies merged and the Pentagon took over security clearance and vetting responsibilities for all of government in October. He’s been DCSA’s acting director since.

Lietzau has a long career in both DoD and industry, first serving in the Marine Corps as rifle company commander and later joining the Pentagon as a civilian employee, where he’s held a wide variety of roles at the executive level.

He joined industry for several years before returning DoD to lead its Personnel Vetting Transformation Office. There, Lietzau mapped out nearly 100 major projects with 480 milestones and roughly 2,000 individual tasks needed to accomplish the security clearance transfer this past fall.

“Bill has been deeply engaged in our merger and transition efforts for most of the last year and has a broad understanding and appreciation of our personnel vetting and critical technology protection missions, and of our collective vision for the future,” Phalen said Tuesday in an email to the DCSA workforce, which Federal News Network obtained.

March 30 is the probable date for the leadership transition, Phalen added.

“Over these next couple of weeks, we will work closely together (even more than we already have been) to make for a smooth transition,” he wrote. “These moves are always interesting, and this one has added dimensions, first of the organizational merger and now a national-level challenge with the COVID-19 pandemic.  Nevertheless, I am confident that you will stay focused and execute our mission throughout this transition.”

As DCSA director, Lietzau will inherit a security clearance inventory that’s at its lowest point since 2014.

DCSA recently achieved a “steady state” of roughly 200,000 pending background investigations, a hard-fought goal for the Trump administration. The backlog peaked at nearly 725,000 investigations back in April 2018.

Besides managing the security clearance inventory, Lietzau will take part in a multi-agency effort to modernize the suitability, credentialing and security clearance, an initiative the Trump administration has called “Trusted Workforce 2.0.”

“Bill’s leadership experience within the military, government and industry, combined with his role leading DCSA transformation efforts, make him the ideal candidate to hit the ground running and lead the DCSA,” Joseph Kernan, under secretary of defense for intelligence and security, said Monday evening in a statement. “Bill understands the criticality of the background investigation and security mission, and the necessity to ensure a trusted workforce and protect critical defense information from theft or disclosure.”

Kernan also praised Phalen for his efforts in leading “one of the largest organizational transfers in the executive branch.”

“While many challenges remain, we also applaud the tremendous work of Charlie Phalen, both at NBIB and for the past six months as the acting director of DCSA,” David Berteau, PSC president and CEO, said in an email to Federal News Network. “Our members rely upon the dedication and hard work of people like these to implement the improvements that make America safer and the security clearance process  more efficient.” 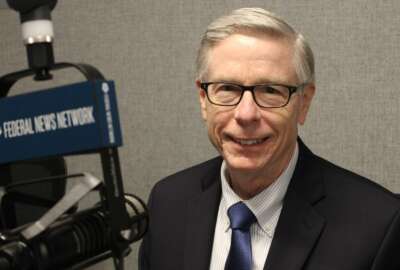