The final details of the 2017 defense authorization bill remain a work in progress for the House and Senate, but one bargaining chip of the deal could undo some steep travel cuts for DoD employees.

The NDAA draft passed by the House Armed Services Committee in April would reverse the diem travel cuts for the defense civilian workforce and military personnel that have been in place since November 2014.

The move to restore the Defense workforce’s per diem travel reimbursement, contained in an amendment by Rep. Mark Takai (D-Hawaii), received praise from unions representing civilian DoD employees — including the American Federation of Government Employees, the National Federation of Federal Employees and the International Federation of Professional & Technical Engineers.

“Basically, DoD employees and our military service members are being penalized for accepting longer-term temporary duty assignments. The result of this is that our civilian [Defense] workforce is having to pay out-of-pocket to travel on official business. I have heard stories of our personnel sleeping in campsites because they couldn’t afford a hotel,” Takai said during a House markup of the bill. “There are instances where longer-term duty assignments are necessary to the needs of our military, and are not simply a choice or a perk. This policy is eroding the morale of the workforce.”

“We believe that causes folks to have to pay for their official travel out-of-pocket, and also cause them to also have to reside in substandard accommodations. This is an extremely important provision to our people. Many of these people who travel are mid-level employees who just absolutely cannot afford to pay upfront and be reimbursed later,” McCready told Federal News Radio. “When you start asking civilian and military members to pay out-of-pocket [with] their personal income to pay for official travel, that is absolutely unfair, and it is not the responsibility of individuals to pay for legitimate government expenses.”

But the travel cuts mean more than just dollars and cents. Naval Sea Systems Command (NAVSEA) protested the travel cuts in a letter to DoD’s Office of Civilian Human Resources in January, and requested an immediate blanket waiver on the grounds that the cuts would cost them more in readiness than they would deliver in cost savings.

“It is not just affecting pocketbooks, but it’s affecting military readiness,” McCready said.

AFGE also supported an amendment that would require DoD and the military services to report on skill gaps created as a result of mandatory headquarters cuts in science, technology, engineering, and mathematics (STEM) positions.

“We recognize that we have a number of critical employees in STEM positions who work in headquarters organizations. And so we believe that those front-line people, who are hard to hire, hard to recruit, and are critical to the mission of DoD could be in danger, and we think it’s very important that Congress send the signal … that these are positions that should not be cut as part of headquarters reduction.”

Reps. Derek Kilmer (D-Wash.) and Walter Jones (R-N.C.) in March 2015 introduced a freestanding bill that would also roll back the per diem travel cuts. That bill, however, never left committee. 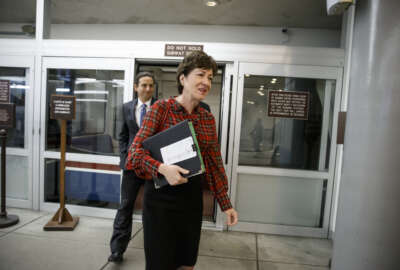 Senators call for end to DoD’s per diem travel cuts

Per diem rates to go up slightly in fiscal 2016