Get the latest news about a possible government shutdown first. Sign up for our breaking news alerts.

As the clock inches further toward a government shutdown at the end of Jan. 19, the Defense Department is preparing its nearly 2.9 million civilian, active-duty and reserve employees for what happens if the government is no longer funded.

The bottom line is active-duty military will work and the operations in the Middle East and other areas of the world will continue to go on uninterrupted,...

As the clock inches further toward a government shutdown at the end of Jan. 19, the Defense Department is preparing its nearly 2.9 million civilian, active-duty and reserve employees for what happens if the government is no longer funded.

The bottom line is active-duty military will work and the operations in the Middle East and other areas of the world will continue to go on uninterrupted, stated shutdown guidance released by DoD on Jan. 19.

Defense Secretary Jim Mattis gave the public an idea of some of the challenges DoD will face during a shutdown.

“Our maintenance activities will probably pretty much shutdown. We will not be able to induct anymore of our gear that need maintenance. Over 50 percent, all together of my civilian workforce will be furloughed and that’s going to impact our contracting, it will impact obviously our medical facilities, it’s got a huge morale impact,” Mattis said during a Jan. 19 speech in Washington. “How long can you keep good people around when something like this happens is always something that has got to hover in the back of my mind. I would just tell you that we do a lot of intelligence operations around the world and they cost money. Those obviously would stop. Training for almost our entire reserve force would stop.”

Active-duty troops moving to an area will still leave on time. However, moves away from an activity will only continue if it is required for the mission.

The process to separate from the military will move forward only if the funds were obligated before the shutdown.

That doesn’t mean the shutdown won’t cause problems for war operations.

“We can and will continue to support key military operations. We’re allowed to do that by law, but the law would force us to disrupt many of our support activities,” former DoD Comptroller Bob Hale said during the last shutdown. “We wouldn’t be able to do most training, we couldn’t enter into most new contracts, routine maintenance would have to stop, we couldn’t continue efforts to improve contracting and financial management including our audit improvement efforts.

For the rest of the DoD employees a shutdown will look pretty familiar if they worked during the 2013 shutdown.

Reps. Don Beyer (D-Va.) and Rob Wittman (R-Va.) introduced a bill to retroactively pay all federal workers in the case of a shutdown, even if they were furloughed.

Civilian employees working in essential roles for the defense of the United States will report for duty.

The guidance is a little more specific on who exactly can work.

Only the minimum amount of employees to complete an excepted task are expected to work in the case of a shutdown.

Those jobs are ones needed for the “safety of human life or protection of property” like civilians who operate and assess intelligence data.

Other positions that won’t be furloughed are those working in the medical and dental care field and those working in acquisition and logistics for essential operations. Those working in logistics at central receiving points for supplies purchased before the shutdown will stay on duty until they are no longer needed.

Education and training positions are mostly exempted from a shutdown, as are those working on legal activities for essential activities.

DoD employees who work in mess halls and child care activities will report to work as will those working with the management of funds for essential services.

There’s also a wild card option: any activities funded with unobligated, unexpired balances will keep their employees on duty. That means if the account that funds your department still has money, those employees will report to work.

Many contractors will still go to work during a government shutdown, but there are restrictions on what they would be able to do. For example, contractors will still be prohibited from doing “inherently governmental” work. And military members will be prohibited from performing the duties of presidentially-appointed and Senate-confirmed officials.

Hale said things like the war in Afghanistan definitely constitute “excepted” activities, but that doesn’t necessarily mean all military commanders have the authority to carry out their operations as normal.

“These are the sort of gray area decisions that our managers and commanders are making right now as they identify excepted and non-excepted,” he said. “But I think most of the ships at sea would stay there. If there were some that stayed strictly in training and weren’t excepted, they would be able to stand down if they had to in an orderly fashion. And we’ll have to make some judgment about what that means. Obviously, you can’t get the ship back immediately.”

During the last shutdown DoD saw its support services take a hit. DoD held back care packages to troops in Afghanistan because of abrupt staffing cuts in the military postal system in Europe.

The Pentagon curtailed seemingly-minor creature comforts such as cable TV for service members serving overseas. The Armed Forces Network took all but one of its channels off the air because of furloughs at its broadcast center in Riverside, California.

The shutdown resulted in a patchwork of disrupted services that varied from installation to installation. For instance, a family child care management office might be at least partially open on one base because it’s managed by a military member. At another installation, a similar office might be closed because its civilian-led workforce has not been exempted from furlough by the local commander.

There’s also the matter of the Veterans Affairs Department. VA did not accept any new disability compensation claims or issue any decisions on appealed claims during the 2013 shutdown, and it cut back on the number of hours its claims processors worked. Several toll-free hotline numbers for veterans, including those designed to handle claims for education benefits shut down entirely. 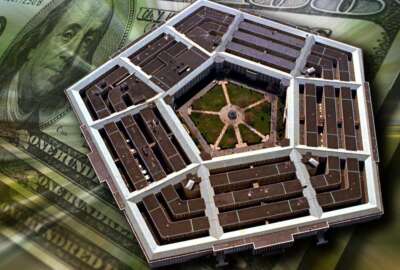 What happens to defense workers if the government shuts down?

DoD would furlough roughly half of civilian workforce during shutdown

DoD works out how military pay bill will impact civilians